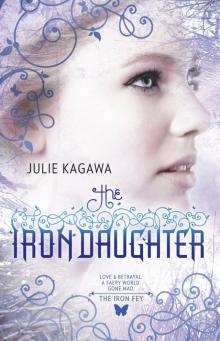 The Iron King stood before me, magnificent in his beauty, silver hair whipping about like an unruly waterfall. His long black coat billowed behind him, accenting the pale, angular face and translucent skin, the blue-green veins glowing beneath the surface. Lightning flickered in the depths of his jet-black eyes, and the steel tentacles running the length of his spine and shoulders coiled around him like a cloak of wings, glinting in the light. Like an avenging angel, he floated toward me, hand outstretched, a sad, tender smile on his lips. I stepped forward to meet him as the iron cables wrapped gently around me, drawing me close. “Meghan Chase,” Machina murmured, running a hand through my hair. I shivered, keeping my hands at my sides as the tentacles caressed my skin. “You have come. What is it you want?”

I frowned. What did I want? What had I come for? “My brother,” I answered, remembering. “You kidnapped my brother, Ethan, to draw me here. I want him back. ”

“No. ” Machina shook his head, moving closer. “You did not come for your brother, Meghan Chase. Nor did you come for the Unseelie prince you claim to love. You came here for one thing only. Power. ”

My head throbbed and I tried backing away, but the cables held me fast.

“No,” I muttered, struggling against the iron net. “This…this is wrong. This isn’t how it went. ”

“Show me, then. ” Machina opened his arms wide. “How was it ‘supposed’ to go? What did you come here to do? Show me, Meghan Chase. ”

Something throbbed in my hand: the beating pulse of the Witchwood arrow. With a yell, I raised my arm and drove the sharpened point through Machina’s chest, sinking the arrow into his heart.

Machina staggered back, giving me a look of shocked horror. Only it wasn’t Machina anymore but a faery prince with midnight hair and bright silver eyes. Lean and dangerous, silhouetted all in black, his hand went to the sword at his belt before he realized it was too late. He swayed, fighting to stay on his feet, and I bit down a scream.

“Meghan,” Ash whispered, a thin line of red trickling from his mouth. His hands clutched at the arrow in his chest as he fell to his knees, pale gaze beseeching mine.

Shaking, I raised my hands and saw they were covered in glistening crimson, running rivulets down my arms, dripping to the ground. Below the slick coating, things wiggled beneath my skin, pushing up through the surface, like leeches in blood. Somewhere in the back of my mind, I knew I should be terrified, appalled, majorly grossed out. I wasn’t. I felt powerful, powerful and strong, as if electricity surged beneath my skin, as if I could do anything I wanted and no one could stop me.

I looked down at the Unseelie prince and sneered at the pathetic figure. Could I really have loved such a weakling once upon a time?

“Meghan. ” Ash knelt there, the life fading from him bit by bit, even as he struggled to hold on. For a brief moment, I admired his stubborn tenacity, but it wouldn’t save him in the end. “What about your brother?” he pleaded. “And your family? They’re waiting for you to come home. ”

Iron cables unfurled from my back and shoulders, spreading around me like glittering wings. Gazing down at the Unseelie prince, helpless before me, I gave him a patient smile.

The cables slashed down in a silver blur, slamming into the faery’s chest and staking him to the ground. Ash jerked, his mouth gaping silently, before his head lolled back and he shattered like crystal on concrete.

Surrounded by the glittering remains of the Unseelie prince, I threw back my head and laughed, and it turned into a ragged scream as I wrenched myself awake. MY NAME IS Meghan Chase.

I’ve been in the palace of the Winter fey for a while now. How long exactly?

I don’t know. Time doesn’t flow right in this place. While I’ve been stuck in the Nevernever, the outside world, the mortal world, has gone on without me. If I ever get out of here, if I ever make it home, I might find a hundred years have passed while I was gone, like Rip van Winkle, and all my family and friends are long dead.

I try not to think of that too often, but sometimes, I can’t help but wonder. My room was cold. It was always cold. I was always cold. Not even the sapphire flames in the hearth were enough to drive out the incessant chill. The walls and ceiling were made of opaque, smoky ice; even the chandelier sparkled with a thousand icicles. Tonight, I wore sweatpants, gloves, a thick sweater and a wool hat, but it wasn’t enough. Outside my window, the underground city of the Winter fey sparkled with icy radiance. Dark forms leaped and fluttered in the shadows, flashing claws, teeth and wings. I shivered and gazed up at the sky. The ceiling of the vast cavern was too far away to see through the darkness, but thousands of tiny lights, balls of faery fire or faeries themselves, twinkled like a blanket of stars.

There was a rap at my door.

I didn’t call out Come in. I’d learned not to do so in the past. This was the Unseelie Court, and inviting them into your room was a very, very bad idea. I couldn’t keep them out completely, but the fey follow rules above all else, and by order of their queen, I was not to be bothered unless I requested it.

Letting them into my room could almost sound like such a request. I crossed the floor, my breath streaming around me, and cracked open the door.

A slinky black cat sat on the floor with its tail curled around itself, gazing up at me with unblinking yellow eyes. Before I could say anything, it hissed and darted through the crack like a streak of shadow.

I spun around, but the cat was no longer a cat. Tiaothin the phouka stood there, grinning at me, canines glinting. Of course. It would be the phouka; they didn’t follow social rules. In fact, they seemed to take great pleasure in breaking them. Furred ears peeked out of her dreadlocked hair, twitching sporadically. She wore a gaudy jacket that sparkled with fake gems and studs, ripped jeans and combat boots. Unlike the Seelie Court, the Unseelie fey actually preferred “mortal” clothing. Whether it was in direct defiance of the Seelie Court, or because they wanted to blend in more with humans, I wasn’t sure.

“What do you want?” I asked cautiously. Tiaothin had taken a keen interest in me when I was brought to court, the insatiable curiosity of a phouka, I suppose. We’d talked a few times, but she wasn’t exactly what I’d call a friend. The way she stared at me, unblinking, like she was sizing me up for her next meal, always made me nervous. The phouka hissed, running her tongue along her teeth. “You’re not ready,”

she said in her sibilant voice, looking me over skeptically. “Hurry. Hurry and change. We should go, quickly. ”

I frowned. Tiaothin had always been difficult to understand, bouncing from one subject to the next so quickly it was hard to keep up. “Go where?” I asked, and she giggled.

“The queen,” Tiaothin purred, flicking her ears back and forth. “The queen has called for you. ”

My stomach twisted into a tight ball. Ever since I’d come to the Winter Court with Ash, I’d been dreading this moment. When we’d first arrived at the palace, the queen regarded me with a predatory smile and dismissed me, saying that she wished to speak to her son alone and would call for me soon. Of course, “soon” was a relative term in Faery, and I’d been on pins and needles ever since, waiting for Mab to remember me. That was also the last time I saw Ash.

Thinking of Ash sent a flutter through my stomach, reminding me how much had changed. When I first came to Faery, searching for my kidnapped brother, Ash had been the enemy, the cold, dangerous son of Mab, Queen of the Unseelie Court. When war threatened the courts, Mab sent Ash to capture me, hoping to use
me as leverage against my father, King Oberon. But, frantic to save my brother, I made a bargain with the Winter prince, instead: if he helped me rescue Ethan, I would return with him to the Unseelie Court without a fight. At that point, it was a desperate gamble; I needed all the help I could get to face down the Iron King and save my brother. But, somewhere in that blasted wasteland of dust and iron, watching Ash battle the realm that was poisoning his very essence, I realized I was in love with him.

Ash had gotten me there, but he almost didn’t survive his brush with Machina. The King of the Iron fey was insanely strong, almost invincible. Against all odds, I managed to defeat Machina, rescue my brother, and take him home. That night as per our contract, Ash came for me. It was time to honor my end of the bargain. Leaving my family behind once more, I followed Ash into Tir Na Nog, the land of Winter.

The journey through Tir Na Nog was cold, dark, and terrifying. Even with the Winter prince at my side, Faery was still savage and inhospitable, especially to humans. Ash was the perfect bodyguard, dangerous, alert and protective, but he seemed distant at times, distracted. And the farther we went into Winter, the more he drew away, sealing himself off from me and the world. And he wouldn’t tell me why.

On the last night of our journey we were attacked. A monstrous wolf, sent by Oberon himself, tracked us down, intent on killing Ash and spiriting me back to the Summer Court. We managed to escape, but Ash was wounded fighting the creature, so we took refuge in an abandoned ice cave to rest and bind his wounds.

He was silent as I wrapped a makeshift bandage around his arm, but I could feel his eyes on me as I tied it off. Releasing his arm, I looked up to meet his silvery gaze. Ash blinked slowly, giving me that look that meant he was trying to figure me out. I waited, hoping I would finally glean some insight into his sudden aloofness.

“Why didn’t you run?” he asked softly. “If that thing had killed me, you wouldn’t have to come back to Tir Na Nog. You would’ve been free. ”

I scowled at him.

“I agreed to that contract, same as you,” I muttered, tying off the bandage with a jerk, but Ash didn’t even grunt. Angry now, I glared up at him, meeting his eyes. “What, you think just because I’m human I was going to back out? I knew what I was getting into, and I am going to uphold my end of the bargain, no matter what happens. And if you think I’d leave you just so I wouldn’t have to meet Mab, then you don’t know me at all. ”