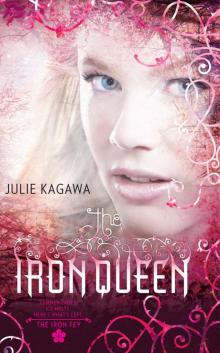 Eleven years ago, on my sixth birthday, my father disappeared. One year ago, on the very same day, my brother was taken from me, as well. But that time, I went into Faery to take him back.

It’s strange how a journey can change you, what you can learn from it. I learned that the man I thought was my father wasn’t my father at all. That my biological dad wasn’t even human. That I was the half-breed daughter of a legendary faery king, and his blood flowed in my veins. I learned that I had power, a power that scares me, even now. A power that even the fey dread, something that can destroy them—and I’m not sure I can control it. I learned that love can transcend race and time, and that it can be beautiful and perfect and worth fighting for but also fragile and heartbreaking, and sometimes sacrifice is necessary. That sometimes it’s you against the world, and there are no easy answers. That you have to know when to hold on…and when to let go. And even if that love comes back, you could discover something in someone else who has been there all along.

I thought it was over. I thought my time with the fey, the impossible choices I had to make, the sacrifices for those I loved, was behind me. But a storm was approaching, one that would test those choices like never before. And this time, there would be no turning back.

MY NAME IS MEGHAN CHASE.

In less than twenty-four hours, I’ll be seventeen.

Déjà vu, right? Shocking how quickly time can pass you by, like you’re standing still. I can’t believe it’s been a year since that day. The day I went into Faery. The day that changed my life forever.

Technically, I won’t actually be turning seventeen. I’ve been in the Nevernever too long. When you’re in Faery, you don’t age, or you age so slowly it’s not worth mentioning. So, while a year has passed in the real world, I’m probably only a few days older than when I went in.

In real life, I’ve changed so much I don’t even recognize myself. Beneath me, the tatter-colt’s hooves clopped against the pavement, a quiet rhythm that matched my own heartbeat. On this lonely stretch of Louisiana highway, surrounded by tupelo trees and moss-covered cypress, few cars passed us, and the ones that did flew by without slowing down, tossing leaves in their wake. They couldn’t see the shaggy black horse with eyes like hot coals, walking along the road without reins or bit or saddle. They couldn’t see the figures on its back, the pale-haired girl and the dark, beautiful prince behind her, his arms around her waist. Mortals were blind to the world of Faery, a world I was a part of now, whether I’d asked for it or not.

“What are you afraid of?” a deep voice murmured in my ear, sending a shiver up my spine. Even in the humid swamps of Louisiana, the Winter prince radiated cold, and his breath was wonderfully cool against my skin. I peered at him over my shoulder. “What do you mean?”

Ash, prince of the Unseelie Court, met my gaze, silver eyes gleaming in the twilight. Officially, he was no longer a prince. Queen Mab had exiled him from the Nevernever after he refused to renounce his love for the half-human daughter of Oberon, the Summer King. My father. Summer and Winter were supposed to be enemies. We were not supposed to cooperate, we were not supposed to go on quests together and, most important, we were not supposed to fall in love. But we had, and now Ash was here, with me. We were exiles, and the trods—the paths into Faery—were closed to us forever, but I didn’t care. I wasn’t planning to ever go back.

“You’re nervous. ” Ash’s hand stroked the back of my head, brushing the hair from my neck, making me shiver. “I can feel it. You have this anxious, flickering aura all around you, and it’s driving me a little nuts, being this close. What’s wrong?”

I should’ve known. There was no hiding what I felt from Ash, or any faery for that matter. Their magic, their glamour, came from human dreams and emotions. So Ash could sense what I was feeling without even trying. “Sorry,” I told him. “I guess I am a little nervous. ”

“Why? I’ve been gone almost a year. Mom will hit the roof when she sees me. ” My stomach squirmed as I imagined the reunion: the tears, the angry relief, the inevitable questions. “They didn’t hear anything from me while I was in Faery. ” I sighed, gazing up the road to where the stretch of pavement melted into the darkness. “What am I going to tell them? How will I even begin to explain?”

The tatter-colt snorted and pinned its ears at a truck that roared by, passing uncomfortably close. I couldn’t be sure, but it looked like Luke’s battered old Ford, rattling down the road and vanishing around a curve. If it was my stepdad, he definitely wouldn’t have seen us; he’d had a hard time remembering my name even when I’d lived in the same house.

“You tell them the truth,” Ash said, startling me. I wasn’t expecting him to answer. “From the beginning. Either they accept it, or they don’t, but you can’t hide who you are, especially from your family. Best to get it over with—we can deal with whatever happens after. ”

His candor surprised me. I was still getting used to this new Ash, this faery who talked and smiled instead of hiding behind an icy wall of indifference. Ever since we were banished from the Nevernever, he’d been more open, less brooding and angst-ridden, as if a huge weight had been lifted from his shoulders. True, he was still quiet and solemn by anyone’s standards, but for the first time, I felt I was finally getting a glimpse of the Ash I knew was there all along.

“But what if they can’t deal with it?” I muttered, voicing the concern that had been plaguing me all morning. “What if they see what I am and freak out? What if they don’t…want me anymore?”

I trailed off at the end, knowing I sounded like a sullen five-year-old. But Ash’s hold on me tightened, and he pulled me closer against him.

“Then you’ll be an orphan, just like me,” he said. “And we’ll find a way to get by. ” His lips brushed against my ear, tying my stomach into about a dozen knots. “Together. ”

My breath hitched, and I turned my head to kiss him, reaching back to run my hand through his silky dark hair.

The tatter-colt snorted and bucked midstep, not enough to throw me off, but enough to bounce me a few inches straight up. I snatched wildly for its mane as Ash grabbed my waist, keeping me from falling off. Heart pounding, I shot a glare between the tatter-colt’s ears, resisting the urge to kick it in the ribs and give it another excuse to buck me off. It raised its head and glared back at us, eyes glowing crimson, disgust written plainly on its equine face. I wrinkled my nose at it. “Oh, excuse me, are we making you uncomfortable?” I asked sarcastically, and it snorted. “Fine. We’ll behave. ”

Ash chuckled but didn’t attempt to pull me back. I sighed and gazed at the road over the colt’s bobbing head, looking for familiar landmarks. My heart leaped when I saw a rusty van sitting in the trees off the side of the road, so ancient and corroded a tree had grown through the roof. It had been there for as long as I could remember, and I saw it every day on the bus to and from school. It always told me when I was nearly home.

It seemed so long ago, now—a lifetime ago—that I’d sat on the bus with my friend Robbie, when all I had to worry about was grades and homework and getting my driver’s permit. So much had changed; it would feel strange returning to school and my old, mundane life like nothing had happened. “I’ll probably have to repeat a year,” I sighed, and felt Ash’s puzzled gaze on my neck. Of course, being an immortal faery, he didn’t have to worry about school and licenses and—

I stopped as reality seemed to descend on me all at once. My time in the Nevernever was like a dream, hazy and ethereal, but we were back in the real world now. Where I had to worry about homework and grades and getting into college. I’d
wanted to get a summer job and save up for a car. I’d wanted to attend ITT Tech after high school, maybe move to the Baton Rouge or New Orleans campuses when I graduated. Could I still do that? Even after everything that happened? And where would a dark, exiled faery prince fit into all of this?

“What is it?” Ash’s breath tickled the back of my ear, making me shiver. I took a deep breath. “How is this going to work, Ash?” I half turned to face him. “Where will we be a year from now, two years from now? I can’t stay here forever—sooner or later, I’m going to have to get on with my life. School, work, college someday…” I broke off and looked down at my hands. “I have to move on eventually, but I don’t want to do any of those things without you. ”

“I’ve been thinking about that,” Ash replied. I glanced up at him, and he surprised me with a brief smile. “You have your whole life ahead of you. It makes sense that you should plan for the future. And I figure, Goodfellow pretended to be mortal for sixteen years. There’s no reason I can’t do the same. ”

I blinked at him. “Really?”

He touched my cheek softly, his eyes intense as they gazed into mine. “You might have to teach me a little about the human world, but I’m willing to learn if it means being close to you. ” He smiled again, a wry quirk of his lips. “I’m sure I can adapt to ‘being human,’ if I must. If you want me to attend classes as a student, I can do that. If you want to move to a large city to pursue your dreams, I will follow. And if, someday, you wish to be married in a white gown and make this official in human eyes, I’m willing to do that, too. ” He leaned in, close enough for me to see my reflection in his silver gaze. “For better or worse, I’m afraid you’re stuck with me now. ”

I felt breathless, not knowing what to say. I wanted to thank him, but those words didn’t mean the same in faery terms. I wanted to lean in the rest of the way and kiss him, but the tatter-colt would probably throw me into the ditch if I tried.

“Ash,” I began, but was saved a response as the tatter-colt abruptly came to a full stop at the end of a long gravel driveway that stretched away over a short rise. A familiar green mailbox balanced precariously on its post at the end of the drive, faded with age and time, but I had no trouble reading it, even in the darkness. Chase. 14202