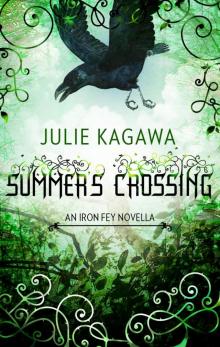 And as I am an Honest Puck

What’s in a name, really? I mean, besides a bunch of letters or sounds strung together to make a word. Does a rose by any other name really smell as sweet? Would the most famous love story in the world be as poignant if it was called Romeo and Gertrude? Why is what we call ourselves so important?

Heh, sorry, I don’t usually get philosophical. I’ve just been wondering lately. Names are, of course, very important to my kind. Me, I have so many, I can’t even remember them all. None of them are my True Name, of course. No one has ever spoken my real name out loud, not once, despite all the titles and nicknames and myths I’ve collected for myself over the years. No one has ever come close to getting it right.

Curious, are you? Wanna know my True Name? Okay, listen up, I’ve never told anyone before. My True Name is…

Hahahaha! You really thought I would tell you? Really? Oh, I kill me. But, like I said, names are important to us. For one thing, they tie us to this world; they ground us in reality somewhat. If you know your True Name—not everyone in our world finds it—you’re more “real” than if you don’t know who you are. And for a race that has a tendency to fade away if we’re forgotten, that’s kind of a big deal.

My name, one of many, is Robin Goodfellow.

You may have heard of me.

Once upon a time, I had two close friends. Shocking, I know, given my natural charm, but there are those who just don’t appreciate my brilliance. We weren’t supposed to be friends, the three of us, or even friendly with each other. I was part of the Seelie Court, and they…weren’t. But I’d never been one for following the rules, and who knew Queen Mab’s youngest son could be such a rebel as well? And Ariella… I’d known Ash a long time before Ariella came into the picture, but I never begrudged her presence. She was the buffer between us; the one who could calm Ash when he slipped too far toward his ruthless Unseelie nature, or advised caution when one of my plans seemed a little…impulsive. Once upon a time, we were inseparable.

Once upon a time, I did something stupid. And lost them both in the process.

Which brings us to…now. Today. Where, once more, it was me and my former best friend, getting ready to head off on another adventure. Just like old times.

Except, he still hadn’t forgiven me for what had happened all those years ago. And he hadn’t really invited me along, either. I sort of…invited myself.

But if I made a habit of waiting for an invitation, I’d never get to go anywhere.

“So,” I said brightly, falling into step behind the brooding prince. “Grimalkin. We’re going to find him, right?”

“Any idea where to start looking?”

“You do realize that doesn’t constitute much of a plan, right ice-boy?”

He turned to glare at me, which I considered a small triumph. Ash usually ignored my goading. Anytime I could poke through his icy indifference was a victory. Of course, when poking the Winter prince, one had to proceed with caution. There was a fine line between irritation and having icicles hurled at your face.

He glared at me a moment longer, then sighed, raking a hand through his hair—a sure sign that he was frustrated. “Do you have any suggestions, Goodfellow?” he muttered, sounding reluctant to even ask. And for just a moment, I saw how lost he was, how uncertain of the future and what lay ahead. Anyone else wouldn’t have seen it, but I knew Ash. I could always catch those tiny flashes of emotion, no matter how well he hid them. It almost made me feel sorry for him.

I grinned disarmingly. “What? Are you actually asking for my opinion, ice-boy?” I taunted, and that doubt vanished, replaced by annoyance. “Well,” I went on, leaning back against a tree trunk, “since you asked, we might want to check if anyone around here owes him a favor. ”

“That narrows things down,” Ash said sarcastically. I rolled my eyes, but he did have a point. If we started naming everyone that might owe our feline friend a favor, the list would fill several books.

Before he could answer, a ripple of glamour shivered through the air. Glitter and streamers of light swirled around us, and a chorus of tiny voices sang out a single note. I winced, knowing there was only one person who thought a normal entrance, like walking through a door, wasn’t good enough for her; she had to announce her presence with sparkle and glitter and St. Peter’s choir.

Sometimes, it sucks being right all the time.

“Leanansidhe,” Ash grumbled, sounding about as thrilled as I felt as the Queen of the Exiles stepped out of the glitter and light and smiled down at us. She looked like she was going to a party where the theme was Most Sparkly Evening Gown, or maybe Quickest Way to Blind Someone. She paused a moment, striking a dramatic pose for her sadly unimpressed audience, before waving her hand and dispersing with the fireworks.

“Lea,” I echoed, smirking at her. “This is a shock. To what do we owe the pleasure of your company, away from the Between and all?”

“Puck, darling. ” Leanansidhe gave me a smile that was about as welcoming as a viper eyeing a mouse. “Why am I not surprised to see you here? It seems I just got rid of you, pet, and here you are again. ”

“That’s me. ” I raised my chin. “The bad penny that always pops up. But you didn’t answer my question. What do you want, Lea?”

“From you? Nothing, darling. ” Leanansidhe turned to Ash, and he stiffened. “Ash, darling,” she purred. “You are a trooper, aren’t you, pet? I was certain, after you made your knightly oath, that you and the girl would go all Romeo and Juliet on me. But you survived the final battle after all. Bravo, pet, bravo. ”

I snorted. “So what am I, chopped liver?”

Leanansidhe shot me an annoyed glance. “No, darling,” she sighed. “But the Winter prince and I have unfinished business, or didn’t he tell you?” She smiled and looked at Ash again. “He owes me a favor—a rather large favor—for helping him out, and I have come to collect. ”

A bargain with the Exile Queen? For a second, I wasn’t sure I’d heard right. “Ice-boy. ” I shook my head, exasperated. “Really? You made a deal with her? Are you crazy? You, of all people, should know better. ”

“It was for Meghan. ” Ash’s voice was low, defensive. “I needed her help. ” He looked at Leanansidhe, quietly pleading. “Can this not wait?” he asked in a calm voice, and the question surprised me. Ash rarely made deals, but when he did, he was religious about upholding them. It was a point of personal honor, I guessed, to keep his bargains without fail, without complaint, even if he’d managed to get the bad end of one. This was the very first time I’d heard him ask for more time, the first I’d heard him plead for anything.

But he’d find no sympathy with the Exile Queen. I could’ve told him that. “No, darling,” Leanansidhe said briskly. “I’m afraid it cannot. I know you and Goodfellow are about to go tromping off after Grimalkin, and that, I fear, might take a long time. A very long time. Time I do not have. I am calling in this debt now, and you will help me now. Besides, darling. ” Leanansidhe sniffed, making a dramatic gesture with a gloved hand. “After you are done with this, I might be able to help. Finding Grimalkin if he does not wish to be found is a near impossible task. I could, at least, point you in the right direction. ”

Ash sighed, looking impatient, but there was nothing he could do. Even I couldn’t wiggle my way out of a contract, though if I had t
o strike a deal, I always left myself some kind of loophole. You’d get screwed eight ways from Sunday, otherwise. In the courts, the nobles all loved this game, each one trying to pull a fast one on the other, though most of them knew better than to make a deal with me anymore. Especially after the fiasco with Titania and the donkey ears. Being a legend does have its advantages sometimes.

Ash knew his way around the fey courts, too; he’d grown up having to watch his back. I was surprised he’d allowed himself to strike a bargain with Leanansidhe; he should’ve known it would come back to bite him.

As if he sensed what I was thinking, Ash glared at me, proud and defiant, daring me to say something. He did know, I realized. Mr. Cold, Dark and Broody might be a lot of things, but he wasn’t stupid. He knew Faery always came to collect, he knew the dangers of bargaining with a dangerous, exiled faery queen. But he’d done it anyway, because of her. Because of the girl we were both crazy for, who was now far away, beyond our reach.

“Fine. ” Ash faced the Exile Queen again. “Let’s get this over with. What do you need, Leanansidhe?”

Leanansidhe preened. “Just a small request, darling,” she smiled. “A teensy favor, hardly worth mentioning. You’ll be done in no time. ”

Which was Faery speak for “huge, ginormous, dangerous ordeal. ” I frowned, but Leanansidhe continued without looking in my direction.

“I’m afraid I’ve lost something,” she continued with a heartfelt sigh. “Something I prize most dearly. Something that cannot be replaced. I would like you to get it back. ”

“Lost?” I broke in. “Lost how? Lost like you dropped it down the sink, or lost like it walked out the door and ran off into the woods?”

Leanansidhe pursed her lips and shot me a glance. “Puck, darling, I don’t mean to sound rude, but why are you still here? I made a bargain with the Winter prince, and it does not involve you in any way. Shouldn’t you be off annoying Oberon or his basilisk of a wife?”

“Ouch. ” I mock grimaced. “Well, it’s nice to feel so wanted. ” The Exile Queen narrowed her eyes, looking a bit more dangerous, and I grinned back. “Sorry to burst your bubble, Lea, but I was here first. If ice-boy wants me to leave, he can say so. Otherwise, I’m not going anywhere. ”