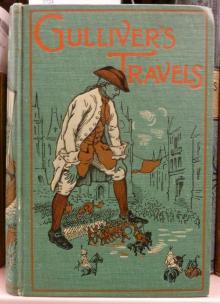 Transcribed from the 1892 George Bell and Sons edition by David Price,email [email protected]

GULLIVER'S TRAVELS INTO SEVERAL REMOTE NATIONS OF THE WORLD

THE PUBLISHER TO THE READER.

[_As given in the original edition_.]

The author of these Travels, Mr. Lemuel Gulliver, is my ancient andintimate friend; there is likewise some relation between us on themother's side. About three years ago, Mr. Gulliver growing weary of theconcourse of curious people coming to him at his house in Redriff, made asmall purchase of land, with a convenient house, near Newark, inNottinghamshire, his native country; where he now lives retired, yet ingood esteem among his neighbours.

Although Mr. Gulliver was born in Nottinghamshire, where his fatherdwelt, yet I have heard him say his family came from Oxfordshire; toconfirm which, I have observed in the churchyard at Banbury in thatcounty, several tombs and monuments of the Gullivers.

Before he quitted Redriff, he left the custody of the following papers inmy hands, with the liberty to dispose of them as I should think fit. Ihave carefully perused them three times. The style is very plain andsimple; and the only fault I find is, that the author, after the mannerof travellers, is a little too circumstantial. There is an air of truthapparent through the whole; and indeed the author was so distinguishedfor his veracity, that it became a sort of proverb among his neighboursat Redriff, when any one affirmed a thing, to say, it was as true as ifMr. Gulliver had spoken it.

By the advice of several worthy persons, to whom, with the author'spermission, I communicated these papers, I now venture to send them intothe world, hoping they may be, at least for some time, a betterentertainment to our young noblemen, than the common scribbles ofpolitics and party.

This volume would have been at least twice as large, if I had not madebold to strike out innumerable passages relating to the winds and tides,as well as to the variations and bearings in the several voyages,together with the minute descriptions of the management of the ship instorms, in the style of sailors; likewise the account of longitudes andlatitudes; wherein I have reason to apprehend, that Mr. Gulliver may be alittle dissatisfied. But I was resolved to fit the work as much aspossible to the general capacity of readers. However, if my ownignorance in sea affairs shall have led me to commit some mistakes, Ialone am answerable for them. And if any traveller hath a curiosity tosee the whole work at large, as it came from the hands of the author, Iwill be ready to gratify him.

As for any further particulars relating to the author, the reader willreceive satisfaction from the first pages of the book.

A LETTER FROM CAPTAIN GULLIVER TO HIS COUSIN SYMPSON.

I hope you will be ready to own publicly, whenever you shall be called toit, that by your great and frequent urgency you prevailed on me topublish a very loose and uncorrect account of my travels, with directionsto hire some young gentleman of either university to put them in order,and correct the style, as my cousin Dampier did, by my advice, in hisbook called "A Voyage round the world." But I do not remember I gave youpower to consent that any thing should be omitted, and much less that anything should be inserted; therefore, as to the latter, I do here renounceevery thing of that kind; particularly a paragraph about her majestyQueen Anne, of most pious and glorious memory; although I did reverenceand esteem her more than any of human species. But you, or yourinterpolator, ought to have considered, that it was not my inclination,so was it not decent to praise any animal of our composition before mymaster _Houyhnhnm_: And besides, the fact was altogether false; for to myknowledge, being in England during some part of her majesty's reign, shedid govern by a chief minister; nay even by two successively, the firstwhereof was the lord of Godolphin, and the second the lord of Oxford; sothat you have made me say the thing that was not. Likewise in theaccount of the academy of projectors, and several passages of mydiscourse to my master _Houyhnhnm_, you have either omitted some materialcircumstances, or minced or changed them in such a manner, that I dohardly know my own work. When I formerly hinted to you something of thisin a letter, you were pleased to answer that you were afraid of givingoffence; that people in power were very watchful over the press, and aptnot only to interpret, but to punish every thing which looked like an_innuendo_ (as I think you call it). But, pray how could that which Ispoke so many years ago, and at about five thousand leagues distance, inanother reign, be applied to any of the _Yahoos_, who now are said togovern the herd; especially at a time when I little thought, or feared,the unhappiness of living under them? Have not I the most reason tocomplain, when I see these very _Yahoos_ carried by _Houyhnhnms_ in avehicle, as if they were brutes, and those the rational creatures? Andindeed to avoid so monstrous and detestable a sight was one principalmotive of my retirement hither.

Thus much I thought proper to tell you in relation to yourself, and tothe trust I reposed in you.

I do, in the next place, complain of my own great want of judgment, inbeing prevailed upon by the entreaties and false reasoning of you andsome others, very much against my own opinion, to suffer my travels to bepublished. Pray bring to your mind how often I desired you to consider,when you insisted on the motive of public good, that the _Yahoos_ were aspecies of animals utterly incapable of amendment by precept or example:and so it has proved; for, instead of seeing a full stop put to allabuses and corruptions, at least in this little island, as I had reasonto expect; behold, after above six months warning, I cannot learn that mybook has produced one single effect according to my intentions. Idesired you would let me know, by a letter, when party and faction wereextinguished; judges learned and upright; pleaders honest and modest,with some tincture of common sense, and Smithfield blazing with pyramidsof law books; the young nobility's education entirely changed; thephysicians banished; the female _Yahoos_ abounding in virtue, honour,truth, and good sense; courts and levees of great ministers thoroughlyweeded and swept; wit, merit, and learning rewarded; all disgracers ofthe press in prose and verse condemned to eat nothing but their owncotton, and quench their thirst with their own ink. These, and athousand other reformations, I firmly counted upon by your encouragement;as indeed they were plainly deducible from the precepts delivered in mybook. And it must be owned, that seven months were a sufficient time tocorrect every vice and folly to which _Yahoos_ are subject, if theirnatures had been capable of the least disposition to virtue or wisdom.Yet, so far have you been from answering my expectation in any of yourletters; that on the contrary you are loading our carrier every week withlibels, and keys, and reflections, and memoirs, and second parts; whereinI see myself accused of reflecting upon great state folk; of degradinghuman nature (for so they have still the confidence to style it), and ofabusing the female sex. I find likewise that the writers of thosebundles are not agreed among themselves; for some of them will not allowme to be the author of my own travels; and others make me author of booksto which I am wholly a stranger.

I find likewise that your printer has been so careless as to confound thetimes, and mistake the dates, of my several voyages and returns; neitherassigning the true year, nor the true month, nor day of the month: and Ihear the original manuscript is all destroyed since the publication of mybook; neither have I any copy lef
t: however, I have sent you somecorrections, which you may insert, if ever there should be a secondedition: and yet I cannot stand to them; but shall leave that matter tomy judicious and candid readers to adjust it as they please.

I hear some of our sea _Yahoos_ find fault with my sea-language, as notproper in many parts, nor now in use. I cannot help it. In my firstvoyages, while I was young, I was instructed by the oldest mariners, andlearned to speak as they did. But I have since found that the sea_Yahoos_ are apt, like the land ones, to become new-fangled in theirwords, which the latter change every year; insomuch, as I remember uponeach return to my own country their old dialect was so altered, that Icould hardly understand the new. And I observe, when any _Yahoo_ comesfrom London out of curiosity to visit me at my house, we neither of usare able to deliver our conceptions in a manner intelligible to theother.

If the censure of the _Yahoos_ could any way affect me, I should havegreat reason to complain, that some of them are so bold as to think mybook of travels a mere fiction out of mine own brain, and have gone sofar as to drop hints, that the _Houyhnhnms_ and _Yahoos_ have no moreexistence than the inhabitants of Utopia.

Indeed I must confess, that as to the people of _Lilliput_, _Brobdingrag_(for so the word should have been spelt, and not erroneously_Brobdingnag_), and _Laputa_, I have never yet heard of any _Yahoo_ sopresumptuous as to dispute their being, or the facts I have relatedconcerning them; because the truth immediately strikes every reader withconviction. And is there less probability in my account of the_Houyhnhnms_ or _Yahoos_, when it is manifest as to the latter, there areso many thousands even in this country, who only differ from theirbrother brutes in _Houyhnhnmland_, because they use a sort of jabber, anddo not go naked? I wrote for their amendment, and not their approbation.The united praise of the whole race would be of less consequence to me,than the neighing of those two degenerate _Houyhnhnms_ I keep in mystable; because from these, degenerate as they are, I still improve insome virtues without any mixture of vice.

Do these miserable animals presume to think, that I am so degenerated asto defend my veracity? _Yahoo_ as I am, it is well known through all_Houyhnhnmland_, that, by the instructions and example of my illustriousmaster, I was able in the compass of two years (although I confess withthe utmost difficulty) to remove that infernal habit of lying, shuffling,deceiving, and equivocating, so deeply rooted in the very souls of all myspecies; especially the Europeans.

I have other complaints to make upon this vexatious occasion; but Iforbear troubling myself or you any further. I must freely confess, thatsince my last return, some corruptions of my _Yahoo_ nature have revivedin me by conversing with a few of your species, and particularly those ofmy own family, by an unavoidable necessity; else I should never haveattempted so absurd a project as that of reforming the _Yahoo_ race inthis kingdom: But I have now done with all such visionary schemes forever.