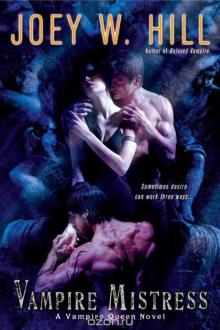 MORENA Wilson had looked like Laura. Not the same color eyes or hair, but the gentle expression, the sweet, open smile. It had been a vivid, punch-in-the-gut reminder of what was starting to blur at the edges in his memory, no matter how he fought against it. He'd been right to kill Morena's murderer. It didn't matter why the vampire had taken Morena's life; she hadn't deserved death. By taking her life, the vampire had forfeited the right to his own. That was justice. A justice he'd never been able to give Laura.

Gideon stared down at the shower floor, no energy to turn on the water yet. He stood motionless on the cold, dull white tile, the yellowed and cracked caulk rough beneath his callused feet. He'd stripped off his clothes in the stall, the blood-soaked fabric falling with a wet splat, the excess oozing out, creating red-brown puddles that collected around his toes. His hair and face were covered in it, like some Stephen King nightmare. No one would know he was the hero.

But he wasn't, was he? Because it didn't matter how many of them he killed; he never got to them soon enough. Morena was still dead, just like Laura. So there were no heroes. There was just the cleanup crew. He was a goddamned janitor.

Pushing his forehead into the wall, he twisted on the cold water full blast, gritting his teeth. Jacob would say he was punishing himself like an Inquisition priest trying to wash away his sins. Gideon bared his teeth. Sometimes he hated his brother as much as he loved him. Like everything in his life, it tore his soul—what was left of it—into two rough pieces that cut his insides like jagged glass.

But then, that was what had started this whole thing tonight, hadn't it? For months, he'd been tracking and taking down vampires whose names Jacob sent him. Through whatever mysterious contacts he had, Jacob identified the vampires who'd stepped outside of the Vampire Council's rules, who were more brutal than most. However, the plain and simple fact was all vampires killed humans. Morena Wilson's death was a forcible reminder of that. Twenty-four years old, a nurse with a fiancé whose helpless rage and grief Gideon understood too well.

He shouldn't be cherry-picking these monsters, merely because his brother had become one of them.

. restored to a purpose. Instead, he kept seeing the vampire's face in those final few moments.

Trey was a hundred-and-fifty-year-old vamp who taught at a community college in the downtown area, conveniently deserted this time of night except for the type of people who kept their heads down or looked for trouble. Of all the freaking things, he taught a night class in advanced geometry, for adult students seeking engineering and architecture degrees, shit like that.

Gideon had stalked him alone. He was hunting on his own far more often these days, something he knew would piss Jacob off, but he didn't really give a damn. He was more effective this way, and it had the added bonus that he didn't have to talk to anyone else. Or worry about them getting killed.

No human could beat a vampire toe-to-toe. It was hard enough with advance planning, but time, experience and way more near misses than he deserved had taught Gideon they could be tricked, same as anyone else. Particularly if you put in the time to study their habits and schedules, and especially if they'd handicapped themselves by trying to pass as mortals. Or maybe he'd gotten that damn good at this.

Tonight he'd baited the trap with a junkie whore, about thirteen years old. All she had to do for the twenty dollars Gideon had promised her was to hit Trey up for money. When he did what Gideon expected a teacher to do—question her, try to offer her more help than the drug money she wanted—she scuttled back into her alley. That wasn't scripted, because it didn't need to be. She was jumpy as an alley cat. Trey followed her. After all, he was a vamp. He wasn't worried about her pimp getting the jump on him, because he was far stronger and faster than an oblivious mortal.

Behind him, Gideon had risen up out of a pile of boxes, where he'd posed as a sleeping wino, the scent of booze all over him. Trey whirled around, sensing the strike, so the cut of the axe had taken only half his head. He'd had his hands around Gideon's throat, his fangs bared, eyes red, when the rest came off and sprayed Gideon with blood. The junkie whimpered, but she knew that screaming attracted attention.

She wanted cash for her fix more than she wanted saving. She cowered in the corner by the Dumpster, gnawing on her fist, while Gideon cleaned his blade and tossed the body in the Dumpster, dousing it with accelerant and lighting it up.

When a vamp burned, there was nothing left. If there was, the brief passage of morning sunlight between the buildings would finish it. No one would even know a body had been there. No police would be called for a trash burn in an alley. Regardless, he'd still gotten the girl on her feet, taking her away from the scene before he tucked the money into her thin hand. He'd brushed off her offer to give him a blow job for another ten.

It probably would have been a mercy to take her head at the same time, end her suffering. He'd lived among the street people long enough to know who was too far gone to be helped. It was easy to recognize them, particularly when he was one himself.

Morena Wilson hadn't been one of Trey's students. She'd been his annual kill. The careful ones, they scoped out their annual kill months in advance, just as Gideon had studied Trey to set him up. All predators used similar skills, no matter the face they wore. He suspected that was why inner city cops sometimes felt more at ease with criminals than they did with their own families. They understood the codes that governed their lives, kept them separate from the worlds they protected or preyed upon, respectively. Another fact of life Gideon accepted, as well as the understanding that such lines could easily get blurred as a result, so that a man had no idea what he was anymore.

In order to remain physically and mentally at their peak, all vampires had to take at least one human life every year. An annual kill couldn't be scum of the earth, or someone terminally ill. It had to be a healthy person, a decent human being, in order not to contaminate the vamp's blood with weakness or evil. But the Vampire Council allowed a vamp to take as many as twelve lives a year, including their annual kill, to keep the higher bloodlust craving in some of them managed. Real sporting of them. Gideon's lip curled.

He wondered who Jacob's annual kill had been. It had been more than a year since Jacob had become one of them, thanks to Lady Lyssa. He couldn't think of Jacob, who'd never raise a hand to an innocent, definitely not a woman or child, who . . . Hell, he couldn't take it further than that.

Gideon dug his fingers into the shower wall. Maybe that was what he needed to do. Take his brother out. End his own life at the same time, like one of those crazy domestic violence cases, news at eleven.

But Jacob was a father now. Gideon had a nephew. If Gideon was going to take out the father, he'd have to take out the child. Kane, with the kittenish fangs and still, watchful eyes, but a sweet laughing mouth. Jacob's smile. Their mother's smile.

He'd have to take out the boy's mother as well, the enigmatic, jade-eyed Lady Lyssa. One unforgettable night, she'd shared her body with Gideon and his brother both, to give his heart a night of peace. Subsequently damning him to this quagmire of indecision, a new and even more challenging level of his own personal hell.

Yeah, as if he could kill them. He had no illusion about the differences between Trey Beauchamp, mild-mannered vamp teacher, and his brother, a former vampire hunter himself and a natural-born warrior, and Lady Elyssa Amaterasu Yamato Wentwo
rth, Queen of the Far East Clan.

Gideon slid down the side of the shower, planting his bare ass on his sopping clothes, and folded his arms over his head, letting the frigid water pound down on him. As he shivered, he told himself it was the cold. Not the tearing sobs he wouldn't permit past his raw throat.

If only he hadn't met Morena Wilson before she died. She'd been on shift in the ER the night he'd come in with a ripped forearm that needed twenty stitches. She'd been careful around him, as women often were, sensing he wasn't entirely sane or safe. But her touch had been gentle and firm, her eyes kind.

She'd already been marked for death, and Gideon hadn't known a damn thing about it.

They'd used her nursing school graduation picture in the obits, and for that moment, it had been Laura's face there, smiling at him. She'd loved him so much. So fragile, so in need of his protection, and he'd failed her.

He took that obit as a sign. He'd lost his way, and it was time to get back on track. Since he had no idea where the road was anymore, he'd decided to kill the one most likely to take him back to it. Trey, someone who hadn't done a damn thing to offend the Vampire Council's sensibilities. Underscoring that Gideon was enforcing human laws, not goddamn vampire ones.

clubs on his travels, they'd been less reputable, more willing to overlook his uncertain temperament in favor of his money.

Money was never a problem. Like the witch hunters of old, he took it from the homes and bank accounts of his quarry when he could swing it, poured it into more weapons, more hunts, more training.

That was another reason Jacob made the damn Inquisition comparison, though Gideon didn't care for it.

He was hunting creatures that were killers, and he wasn't living like Donald Trump. Hell, that temporary club membership was the only significant cost he'd had unrelated to his hunting. He always had plenty left to hide in his cheap room, because what else did he care to do with it?