Bound by the Vampire Queen, p.1 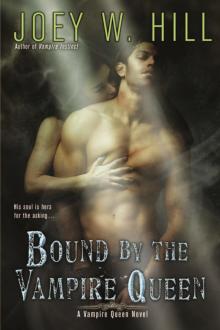 JACOB squatted on his booted heels on a mountain of broken concrete. Looking down the slope of rock and across a thicket of ruined foliage, he wondered how hard it was to pul off a fairy's wings. He'd sure as hell like the chance to find out.

His lady and Fae Lord Keldwyn were a few hundred yards away, standing next to the clump of twisted trees where the verandah used to be. She cal ed it the mangrove, evidence of her macabre sense of humor, given that the trees used to be a pack of rabid vampires. That is, before she turned them into future firewood, and crushed the surrounding marble and concrete like popcorn.

Thanks to his ability to be in her mind, Jacob could easily hear their conversation. Which was why he was envisioning wing extraction. Of course, since Keldwyn's wings were currently concealed, Jacob would settle for breaking a limb or two.

“As long as you had no true grasp of Fae power,” Keldwyn was saying, “the court had no interest in you. You were like solitary elementals; pixies, dryads, gnomes. The peasantry of our kind. Less than that, even, because of your inferior vampire blood. ”

Through his lady's mind, Jacob watched the Fae lord's eyes, like onyx and pale moonstone, slide over the center tree. The shape of the trunk was undeniably like the tortured body of the male vampire trapped within it. One large aboveground root kinked up like a leg, in a futile struggle to push out of its prison.

“But this, and the potential of your parentage, has set your future course. The Unseelie queen demands you come before her, for assessment and possible acknowledgment. If she determines that you are significant, you will be made a member of her court, one of her subjects, required to attend her will as she deems appropriate. ”

“What are they saying?” The question came from Lord Mason, sitting at a lower point on the pile of debris. He had his elbows braced on a jagged slab of what used to be the veranda steps. His long legs were stretched out, ankles crossed.

“He's saying he misses us. That he wants us to come join the conversation. ” Jacob rose, and with a couple of graceful leaps, was on the ground near Mason's polished riding boots.

“The same tight-assed bastard who said ‘the vampires need to wait here,' like we were lepers?” Mason arched a brow.

Jacob gave him a grim smile. When Keldwyn had issued that curt directive, not even by a twitch had Mason reacted to being treated like chattel on his own estate. Of course, that wasn't surprising.

Though Jacob had warned Mason of the Fae's contempt for vampires, Mason had dealt with plenty of egos in his own world. Hadn't they all ? Jacob's lip curled at the thought.

“Yeah, he's had a change of heart. He's feeling all warm and fuzzy about us now. ”

Mason snorted, but Jacob knew neither of them gave a rat's ass what Keldwyn thought. Lyssa was their mutual main concern. As such, when he headed toward the mangrove, he was aware of Mason rising to fol ow him at a sauntering pace, ostensibly to check his surviving roses, but Jacob knew he had his back. A Fae might be able to kick a vampire's ass any day of the week, but kicking two of them, as well as dealing with Lyssa, might be more than Keldwyn wanted to do. He'd muss his perfect hair, after all.

Jacob. Easy. Lyssa spoke in his mind. Let's see where this goes.

I'm ever obedient to your will, my lady.

He felt the touch of wry humor, saw it flash through her jade green eyes as her gaze flickered his way.

Still, he meant it. He wasn't as good at poker faces as Mason, but he could keep his mouth shut when needed. As Keldwyn noted their approach, his expression got sour. Lyssa spoke before he could say anything, however.

“And if I prefer to remain solitary?” Unlike him, his lady had an exceptional talent for not revealing anything about her true thoughts on a matter, so Jacob knew the edge to her voice was deliberate. Keldwyn turned his gaze back to her.

“Then you should not have done this. ” He nodded at the trees. “This is dark magic, with a clear Unseelie signature. Your father had blood from both the Seelie and Unseelie courts, so it remains to be seen if your abilities will stay in the realm of one court or expand to both. However, as of now, you've made an indelible mark on the Unseelie queen's universe, and so her eye is turned toward you. This is not an invitation. If you choose to refuse it like one, you will not have months to live like a fugitive in the woods as you did when the vampires shunned you.

The queen will destroy all you hold dear. She can have you brought to her in chains and keep you as a pet at her feet, until she feels you understand obedience. ”

Keldwyn's voice was flat, his gaze utterly impersonal. Even so, Jacob sensed something beneath that, an elusive sense of urgency, enough to underscore and make his words unsettling truth, not a goading threat.

Ever since they'd met Keldwyn, months ago, this was the way it had been. Jacob's gut was always on high alert around the pointy-eared bastard, scanning for something that felt not quite . . . right. Of course, Jacob had Irish roots, and before her death, his mother had regaled him with bedtime stories of the Fae. Fascinating, beautiful and wondrous, they were also capricious, unpredictable and moral y neutral at best. At worst, they could be and do things much like Keldwyn had just described the Fae queen doing. In short, it was best to give anything smacking of them a wide berth.

I am part Fae, Sir Vagabond. Lyssa's amusement was evident in the thought. I think you have lost that chance.

Because of his background as Renaissance Faire knight, drifter and vampire hunter, it was her preferred endearment for him when she was in a good mood. Less frequently—usual y when she was reminiscing much further back—she sometimes cal ed him Sir Knight, recal ing his past life as such.

Regardless, he was glad she was calm about this, but then Lyssa had fought in the Territory Wars and seen a thousand years of crises. She tended to consider a matter careful y before getting too excited about things.

Mason, with a similar relaxed mien but one Jacob knew could conceal a panther about to tear into the soft underbel y of his prey, had taken a seat on a wrought-iron bench. He stretched a powerful arm across the back, propping one boot against the base. Like Jacob, Mason kept his amber eyes trained on the Fae. Keldwyn continued to ignore them both.

“To go to her court, you will have to cross into the Fae world. She won't simply throw open the gate.

She will want to test your mettle, see if you can find your way to it. I am not all owed to point the way, but she did not forbid a useful suggestion. ” Lyssa cocked her head. “You're playing a dangerous game with her intent. ”

Keldwyn shrugged. “Our ways are tricky. A step left, when the dance seems meant to go right. You may have powers like ours”—he glanced toward the grove again—“but you do not yet know the way our minds work. We are creatures of random chaos. It is why our paths separated from humans and vampires so long ago. Because of their violent natures, they need order and structure. We do not. ”

“Yet the Fae have a court and a queen. Two courts, even. ”

“We have our own etiquette. It's just far less predictable. ”

“There are time distortions between the Fae world and ours,” Lyssa said. “What if I go there for a day and return to find a hundred years have passed here?”

“The queen is capable of managing such things. If you please her, it will not be a concern. Do you wish my suggestion or not?”

Not. Though I'd be happy to give him a suggestion or two.

“Entrances to the Fae world used to be fairly easy to find. In-between places or times. Crossroads, forks in the road, stream edge
s, midnight or noon, equinoxes. The mists. Such circumstances are stil required for an opening, but in your case the will of the Fae queen must be aligned with it as well. Bring an offering that impresses her, and she will make the crossing an easier one. ”

Keldwyn's focus moved back to that largest tree. “I walk in your world, in the places of old Earth, deep forests such as where we met. However, because of my age and strength, I can visit places like your cities, observing certain precautions. Our young are not so resilient. If, through foolish curiosity, they wander too deeply into the human world, and keep their soles too long on the things of earth men have made into their tools—concrete, steel, brick—the young Fae weakens. When their magic is dangerously sapped, their base instinct is to transform, as many of us can, into a pure earth form to regenerate. A tree, a plant, a stone. ” Keldwyn's gaze shifted to the necklace Lyssa wore, chunks of amber. Some of them had tiny fossilized creatures inside. The center pendant was a smooth teardrop of jade, speckled like a bird's egg. It reflected the color of her intent eyes.

“But that is a trap,” he continued. “Once they are in that form, it becomes their prison. Only the touch of a Fae, one who has enough strength for it, can release them. Even then, the young will need to be taken out of your world of iron and structure, back to the Fae world, before their strength can truly regenerate. ”

“So you want me to free someone to impress the queen. ”

Keldwyn lifted a shoulder. “There is one, a dryad, lost to our world over two decades ago. The queen bore her affection and was grieved to lose her, but where she is, no pure Fae can reclaim her. The risk is too great, and the queen forbade anyone to try, because of the chance we might reveal ourselves.

However, you are as yet outside our world, our laws.

If you succeed, I am certain a gateway in the proper in-between setting would open for you. ” Lyssa considered him. “You are ever helpful, Lord Keldwyn. Where is this Fae located?”

“In the city you made your home before your fal from grace with the Council. Atlanta. In a place surrounded with broken asphalt. I do not know her condition, but even near death, a dryad can live for a long time inside the shelter of a tree. I cannot give you the exact location, but she is in the downtown area, the decaying, crime-ridden parts. Perhaps in what you cal a parking lot, or an older, abandoned area?”