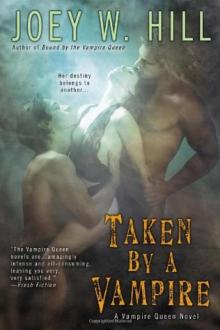 SHE’D betrayed her Master. In the vampire world, there was no greater crime a servant could commit. She should be overwhelmed by her failure, but she was numb. What did anything matter, once a decision was made that was the end of everything? Her feelings since that moment had been out of reach, faces at the top of a well, staring down at her silent, prolonged drowning.

She was cold, but that was immaterial. Her needs had always been secondary to her Master’s. A simple issue of being cold wouldn’t interfere with her respectful silence, the straightness of her back as she sat on her knees in the empty hallway. There was a chair here, but she hadn’t been told she could use it. A tapestry hung on the wall before her, a depiction of Hell, monsters with gaping mouths, staring eyes.

Lady Lyssa, the new head of the Vampire Council, planned to move their headquarters out of this grim Berlin castle. But there was other business to finish first, and Alanna was part of that. The only reason she was still alive was because they’d hoped to track her Master through her blood connection to him. When Lord Stephen had plotted the murder of the Council’s primary assassin as part of a larger conspiracy to increase the influence of made vampires, he’d become a fugitive. He’d have killed her before he fled, but escape had been a higher priority.

That didn’t guarantee her safety, not that she’d ever had any hope of that. Once he’d found a safe hole, he’d begun tearing her apart. It was the only practical choice, really. He had no ally loyal enough to risk the Council’s wrath by taking her life. So he’d destroy her from the inside. A fully marked servant had no defense against her Master’s invasion. He could reach into her soul, torment and break the mind of his bloodbound human minion.

She wondered if whoever had created that tapestry had endured such an experience. If so, the terrified eyes and gaping mouths belonged to people the artist had loved, or different, twisted versions of his own soul, put through unspeakable horrors. Time had no meaning in the face of such mental agony.

The tapestry dominated her field of vision, but she wouldn’t alter the correct alignment of her eyes straight ahead. However, the gooseflesh caused by the chilly hall prickled in reaction as she stared at the wash of bloodred fibers that dissolved, became blood itself, trickling down over the scene.

She supposed it had been exhausting to Stephen, maintaining the energy to keep her spinning on her axis so the Council couldn’t draw a bead on him, send their assassin to end him. That he hated her for her betrayal, would kill her for punishment as well as self-preservation, was certain. But overall it wasn’t personal. The soul torment had been to preserve his hiding place. He had no feelings for her. A human servant was a valuable tool until she wasn’t. Stephen had made that clear, long ago.

Lord Belizar, the Council head when Stephen’s treachery had come to light, had harshly commanded her to stay alive, to endure. His thunderous Russian baritone had penetrated the nightmares, and her training had done the rest. She was an Inherited Servant. She would obey, would serve with every ounce of will she had.

Before she’d been conceived, she’d been promised to the InhServ program. The intense indoctrination had begun at age six, the last time she’d sat at a table with her birth family. Her parents taught her to kneel behind her father’s chair and wait silently while they ate dinner, talked to their other children and each other. It had been confusing, but when she understood she was being prepared for the great honor of serving a vampire, she’d embraced the idea. Her one desire, her one goal in life, had been to exceed even the high expectations of that honor.

Lord Brian, the Council scientist and doctor, had experimented with a variety of blockers, things that would stop Stephen’s interference with her mind, but each one failed. As Stephen’s torment of her mind persisted for weeks, Lord Belizar’s command wasn’t enough to override her Master’s power over her soul. She had to be strapped down to keep her from taking her own life, because Stephen was doing everything in his power to make her do just that.

“I will find a way to block him, Alanna. But you must help me. You must hold on. ”

When he said that, Lord Brian didn’t know he looked like a giant spider to her, with snapping mandibles and hairy legs reaching for her, but even as she was screaming and writhing against her bonds, soiling herself with her fear, the inexorable command penetrated.

There was a gentle firmness in Lord Brian’s directive that made her want to try harder, keep struggling, though she didn’t know why it bolstered her will more than Lord Belizar’s harsh, impersonal command. There was no room in her mind for asking such questions. She did hear snippets of conversation, voices in the storm.

Could try more aggressive methods . . . but it will kill her. Only one shot, and if it doesn’t work, we lose our chance.

They should do it. She was useless otherwise. She couldn’t keep her Master from unbalancing her mind long enough for them to get a fix on him. If they could pin the butterfly to the board and, in those few moments while her wings were still twitching, get a bead on him, then her last act would be one of service.

“Please . . . ” She must have said something to that effect, because it was the only time she remembered Lord Brian touching her, a brief whisper of fingertips over her forehead that Stephen turned into worms crawling into her eyes, sending her screaming down another blood-soaked tunnel. But then something else had happened. Even now, she didn’t know whether her mind had created something to help her obey the Council’s will, or if it had been real. Since Lord Brian’s blockers had started to work, she’d had difficulty parsing the reality from the nightmares she’d experienced during those terrible days.

She’d been too exhausted to fight anymore, deaf and dumb to everything but those hallucinations. The significant thing had happened while she was staring at a group of rats, perched on her ripped-open belly, feeding on her exposed insides. Blood on their muzzles.

Dead . . . better off dead . . . kill yourself. Serve your Master. Make up for your betrayal. It’s the only way to make it right.

“I never paint dreams or nightmares. I paint my own reality. ” The calm, confident tone brought the rats to an abrupt stop. They stood on their haunches, looked through the wall of flames surrounding her. “That’s a quote from Frida Kahlo. Easy, yekirati. We’ll see what pictures we can paint together. ”

She couldn’t see anything, but that voice . . . A vampire male for certain, but just like Lord Brian’s voice, his had something . . . more to it. Something that made her want to please, to obey, and not just because of her natural desire to serve, honed by her training. His hand settled on her abdomen. Long, elegant fingers, pale skin. Ragged nails, rough cuticles. Odd. Most vampires had well-manicured hands.

The rats fizzled away into scattered ash, her flesh reknitting over her concave stomach. Her ribs protruded over it like the lip of a cave. They’d tried feeding her, but everything came up. Only steel through the heart could kill a third-mark servant . . . or beheading, which killed pretty much everything, so she could be a skeleton with skin stretched over it and endure to serve.

Those fingers whispered over her flesh, distracting her. When they disappeared from her view, she drew an unhappy breath, but they returned covered in paint, which they started to swirl across her flesh. He’d meant it quite literally. He was painting a picture. This was obviously another hallucination, which meant Stephen would turn it into something horrid, but she’d take the respite. She wanted to hear that voice again. But a servant didn’t ask for anything.

The figment of her imagination created a sky across her stomach. Blue, green, a touch of rose. The muted red and orange he’d applied firs
t became a hazy sunrise. His touch soothed. She didn’t want it to go away, but she was at her Master’s mercy. She’d betrayed him once, but she would resist him no other way. She would honor her training that much.

An abrupt sting in her arm told her something new was flowing through her veins. Lord Brian, perhaps trying something different. But she kept staring at those fingers. More details were coming into focus. The new male wore a ring, a heavy pewter band with markings on it. As he drew his hand away, he grazed her bound one. She managed to latch on to the middle finger that bore the ring and tried to make sense of it, like a blind person reading Braille. He stilled, letting her hold on to him with that awkward, weak grasp. A servant didn’t touch a vampire unless invited, but this wasn’t real, so it didn’t matter.

“Time is a great healer. That is what the ring says, in Hebrew. My ancestral language, so to speak. ”

His voice was thoroughly masculine. It seemed absurd to call a man’s voice masculine, but Stephen’s hadn’t struck her that way. She thought of the Edgar Rice Burroughs story, where the hero described a trusted brother-in-arms as “fully male,” meaning he had all the best qualities a man could have. So perhaps it wasn’t so absurd.

He had no definable accent, typical of a well-traveled vampire with a few centuries in age, but she’d guess American. Whatever Lord Brian had injected seemed to be clearing her mind. Her body twitched, then went into a rigid, muscle-grinding spasm. She clamped down on that ring finger as her other hand convulsed, fingers jerking into a splayed, spiderlike rigor. Her thighs strained, pressing her hips hard into the table, her neck arching. A cry struggled free of her throat, crossed an inert tongue, dry lips.

“Easy . . . dinnae fash yourself, lass. ” Another new voice, Scottish, came from directly above her. Though he had a different accent, this man had a tone like the other man’s. Gentle, irrefutable command that told her she should do her best to obey—once she determined what fashing was and why she shouldn’t do it—and that obeying their will was a port in the storm. A shelter.

She was looking up into tawny brown eyes. Dark brown hair was carelessly pulled back from his strong-featured face. He was a big man, towering over her like a concerned oak. If she put her slim hand on his jaw, she expected it would look like a child’s in comparison. When he put his hands on her head, cupping her ears, her jaw, it emphasized his size.