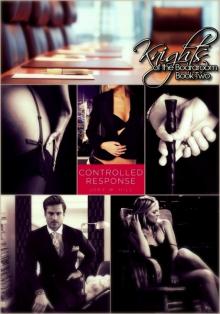 Forty-five miles. God, the only thing better than this was sex. Sex done exceptionally well. As Lucas crested the hill, pushing the burn in his legs, he snagged his water bottle to take a measured draught. Releasing the bike handlebars to coast hands-free, he shifted his hips to negotiate the inevitable curve. No such thing as a straight line or a flat expanse this deep in the Berkshires. Every downward slope followed by a challenging upward one. Like the curves of a woman's body. Or her mind.

Ben had given him shit about hopping a charter here for the weekend when they were still figuring out how to make the numbers work for the Mancuso plant operation. But it was all bullshit, because Ben knew Lucas did his best problem solving while cycling, just as the legal advisor did it by finding the prettiest ass available and immersing himself in it.

When they came back to the office Monday, Ben would fix the legal snarls, and Lucas would crunch the numbers into manageable pieces. Hell, Matt should save the money on their corner offices. Though Lucas had to admit he liked his Baton Rouge city view, with the backdrop of the Mississippi River.

It was time for a lunch break and a stretch, if he could find the spot his buddy Marcus had told him was right off the road around here. He was pretty deep in the Berkshire farm area, but tourists did -have a way of finding the hot spots. Still, Marcus had stressed

"hidden," even giving him GPS coordinates for the exact location, give or take ten feet.

There it was. As he rolled across the shoulder, he saw the narrow deer trail. A couple broken twigs and some spoor suggested the brown-eyed creatures had passed through recently.

It was a short hike, so it worked as a good cool-down. The light racing bike was easy to carry, even with his gear. Marcus had said the glade would have a stream, soft grass for a nap, and a frame of trees for the sky that would make Lucas think he'd fallen into a nest made by Heaven itself. Marcus was a gallery owner, brushing shoulders with New York art types, so such metaphors were to be expected. Or maybe the description had come from Thomas, his spouse, or life partner, whatever they called it. It sounded like a good place and Lucas wouldn't dwell on what they might have done there. To each his own, but his preference definitely ran to heart-shaped asses of a different gender. Skin like cream, and tender pink lips hidden like treasure between not-too-firm, not-too-soft thighs.

Just like Goldilocks, he knew when they were just right.

Lately, it had been just okay. Some lovely ladies, intelligent, beautiful, and willing.

Business associates on the same time schedules, which discouraged anything deeper on either side but ensured dinner dates and sexual release were no farther than a cell phone call. He was CFO for Kensington & Associates, after all, so he didn't have trouble with that.

But maybe it was watching Matt, the head of K&A, with his new wife, Savannah, during the past year. The way they'd taken the leap of faith together, and their love just seemed to grow and grow. Not like a molasses flood, drowning everyone in reach in gooeyness.

More like the quiet reassurance of the ocean's murmur. Timeless, clean, overwhelming.

Proof that there was a greater purpose here. Maybe Lucas was ready for something deeper himself. Maybe that was why he was cycling and Ben was hip deep in pussy by now.

As he stepped into the clearing, anticipating the tranquility, he came to a dead stop, his thoughts scattering like a game of 52-card pickup.

Marcus hadn't mentioned the spot came with a half-naked girl on a motorcycle.

Either that, or Lucas had been run over by a minivan and didn't realize he was dead, stumbling into everything Heaven should be. If so, he was profoundly thankful to the minivan driver.

He blinked. Yes, it was definitely a woman, stretched out on the curved seat of a Night Rod series Harley. At one time, she'd apparently been wearing black jeans with riding chaps over them, for they were in a crumpled pile next to the bike, leaving her lower body clad only in a pair of silky ivory panties. Her feet were braced on the handlebars, legs spread, ass snugged down in the driver's seat while her upper body was arched over the hump to the passenger seat. The toned legs and generous ass were taut, for her fingers were tucked into the panties. Thanks to the blessing of filmy material, he could see their individual movements.

She was wearing a corset. Ivory colored as well, with one strap falling off her shoulder and elevating her breasts so they were accentuated by the slightest breath. Just a touch of lace at the low decol-letage that tempted full exposure from the crescent stretch of her torso. The corset hooked in front, so would lie flat under the heavy white T-shirt she'd been wearing, also lying in the grass.

Tiny earphones for a music player were tucked into ears as delicate as porcelain, half-hidden by her hair, skeins of white gold long enough to fall over the top of the rear tire. A few strands were scattered across her face by the breeze, teasing wet, parted lips. Her bare feet flexed against the chrome bars as she apparently hit a good spot, biting her lip.

Since her eyes were closed, golden lashes fanning her cheeks, he imagined she was deep in some fantasy, picturing her fingers as someone else's.

Or perhaps she was thinking about someone watching her, getting hungrier for a taste of the pussy she'd teased into a wetness that had soaked the crotch panel. Someone who wanted to slide his hands under her, grip that delectable ass, and tongue her first through the saturated silk. Bite her clit through her panties. Women loved that, the buffer to stimulation that provided friction, helped warm them up, so that when he finally pulled the cloth out of the way and tasted creamed flesh, they would be writhing, begging.

A gentleman—not to mention a smart man—would have backed away. But he couldn't make his feet move. This was undeniably a gift from God, and he was a devout Methodist. Okay, at least when he went home to Iowa during Christmas and attended church with his parents. Regardless, there was a higher power, a higher order. Hadn't he just been thinking that? Maybe this was an answer.

Yes, Lucas. In your search for a deeper relationship, God has sent you to a private photo shoot from Penthouse.

Hey, crazier things had happened. Like his spontaneous decision now to become part of her fantasy. As he moved forward, he hoped she wasn't armed.

Oh, she'd so needed this. Cassandra didn't like being away from home, but she'd had to come to Hartford to close this deal. Two days of managing the negotiation had been bad enough, but she'd had to deal long-distance with crisis after crisis at home, from the minor issues that came up with her younger siblings to a frantic call from the nanny saying her black-sheep brother had gotten as close as the security gate. Fortunately, the guard had sent him on his way. Everything was okay there, and she'd been waiting to fly home to Baton Rouge in time to listen to her baby brother Nate sing her a new song he'd learned. That had been before the general manager had put in a frantic call telling her the deal she'd just finalized had unraveled. Knitting it back together had involved a trip back to the Hartford office and some corporate diplomacy, along with a little tactical bullying of the key players for having almost dumped asixty-million-dollar contract over some childish perceived insult.

That detour had kept her in the area an extra day, so when she'd passed the motorcycle dealership and saw that they did day rentals for enjoying the Berkshire scenery, she'd thought, why the hell not? She'd chosen the Night Rod and headed out with a map.

Finding this glade had been an extraordinary accident. Pulled over to take a break, she'd seen a pair of deer slipping into the forest. She'd brought a camera, wanting to take some pictures for the kids, so when she'd followed their path, heard the inviting rush of
water, she found a stream with a small waterfall, a spot too far off the beaten path for anyone to find. Perfect. Even though she was far from home, the idea of being far from anyone, out of the eye of the world completely, was exactly what she needed.

It seemed sometimes that all she dealt with were children. She much preferred her siblings to those well into supposed adulthood. Was every man in the world looking for Mommy? Did any of them know how to use their brains and take charge, hold the reins comfortably? She'd met precious few like that.

As she'd sat in the grass, leaning against the comforting bulk of the bike, she'd closed her eyes, imagined that hard bulk as such a man. Lying back between his legs, the two of them enjoying the quiet beauty of the setting. His hands would slide up to cup her breasts, tease the nipples with relentless skill as he pushed her hair aside to kiss her throat, holding her fast as her legs moved restlessly in the grass, needing his touch between them, something he held just out of reach to drive her need higher.

In a house of five kids, with her responsibilities as their guardian, there was little privacy, even to do this. Often she felt like a bottle of soda, shaken to the point of near explosion.

Jesus, she'd even resorted to adolescent metaphors for her sexual frustration.

She wanted to stretch her body out on the seat of the muscle bike, strip down to nothing but panties and corset, and make herself come, imagining herself as the pinup of some virile god's fantasy, watched by him through the trees. She'd know he was there, so her movements would be provocative, blatantly carnal, until he couldn't resist any longer and came to her. He'd turn her over the back of the bike, bind her wrists to the pedals, spread her legs wide over the rear tire, the sun's heat on the chrome burning her flesh, and oh, God, she'd be dripping for his cock. But instead he'd kneel first, go to work on her with his mouth, until she was screaming, begging . . .

She'd put on her ear phones so she wouldn't worry about every rustle of woodland creature, the snapping of twigs. No one was out here, and she didn't want to care anyway.

Truth to tell, it wasn't a bad fantasy, imagining someone stumbling upon her. Someone whose name she didn't need to know, who wouldn't let her negotiate or get away with anything. Who would see through every ploy and sweep her choices away.

"Please, let me . . . " She knew she'd spoken it aloud, a whisper, though she couldn't hear it over the hard bass line. When her eyes opened on a brief flicker to let in sunlight, they stayed open. Widened.