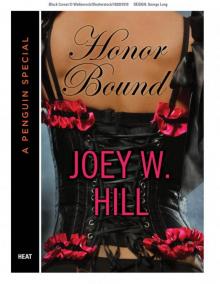 “I can’t believe you broke out the 1939 Macallan. ” Peter examined the bottle of whiskey.

“You must think I’m going to die this time. ”

Ben slanted him a grin. “Well, it is your second tour. Two strikes. ”

“Man has that much luck, it’s got to run out,” Lucas agreed. The athletic CFO dodged Peter’s affable punch, leaning back in the spacious VIP booth that allowed plenty of room for the five men, all at or above six feet tall, with shoulder spans to match.

“You guys are terrible,” their waitress decided, a dark-eyed Spanish beauty with a name tag that said Maria. With extreme pleasure, Peter noted the lushness of her breasts, presented with mouthwatering appeal over the tight hold of her velvet blue corset.

“Honey, where you going?” she asked.

“He’ll get slack, cozy up to some doe-eyed beauty with an IED under her burka. One a lot like you, gorgeous. ” Ben raised his empty glass, giving her a lazy, appreciative look.

She snorted delicately at the green-eyed, dark-haired lawyer and flipped a corkscrew out of her short apron. “I better get a good tip from a group guzzling down Macallan. This goes for about ten grand, last I heard. ”

“Yeah, but he blew his entire wad on it,” Jon said. “He’s trying to compensate for spiritual emptiness with material goods. ”

Even as Jon spoke, Peter noted the engineering genius of their five-man team was gazing absently around the club, which probably meant Jon was solving physics equations, creating the next great invention, and meditating on the meaning of the universe, all while determining which woman he’d take to Nirvana with him tonight.

“Bullshit,” Ben snorted. “You can be right with the universe and enjoy the finer parts of it. Like our gorgeous server. Want to share a sip with us, darling? There’s room on Peter’s lap, though you’ll find far more to satisfy you on mine. ” Peter kicked him under the table, but Maria laughed, expertly removing the cork.

“Tempting, but not allowed, precioso. Do you like toffee?” she asked Peter.

As he nodded, she poured a draught and handed it to him. “Must be why your friend chose it. Despite his mierda, I think he knows a lot about you. ” Ben raised a brow. “You’ve had Macallan before. ”

“You think you’re the only high roller who’s ever come through, precioso? This is The Zone, the most upscale fetish club in the South. And I do drink. When I’m off duty, and if the company’s worthwhile. ” She gave him a saucy look, checking him out just as outrageously. “We’re delighted to have you here. You call me if you need anything. ” As she sauntered away in the skintight latex black pants, a diamond pendant dangling provocatively at her nape from the choker she wore, Ben leaned out. Peter gave Jon a nod and he shifted right, hard. Too late, Ben grabbed for the table, ending up on his ass on the floor as the men burst out laughing.

“All right, keep it up. Next time you guys get yourself in a legal snarl, this lawyer’ll keep his mouth shut. ”

Matt Kensington, their boss, but as much a part of their group as the alpha wolf was part of the pack, bared his teeth in a grin. “You might not have a job for long. ”

“I know too much about all of you. ” Ben, unimpressed, put himself back in the booth with retaliation in his gaze. “Plus, no one else will put up with your crap. What do you think, soldier?”

Peter had taken a swallow. He closed his eyes. “Hell, Ben. This is the shit. ”

“I beg to differ. It is definitely not shit. ” But Ben smiled, poured for himself and the other three men. When they lifted glasses and brought them together, for a while nothing further was said, each contemplating the whiskey and why they’d brought Peter here.

None of them would talk about it tonight. Nothing serious, anyway, because Peter wouldn’t want them to. They worked together in Baton Rouge as the management team of Kensington & Associates, the manufacturing acquisition company Matt Kensington had founded and made successful through their combined talents, but an unshakable bond existed between them whether they were around a boardroom table or a poker table.

There were a lot of things that went into that—shared experiences, ups and downs—but the fact that every one of them was an experienced sexual Dominant, preferring to use control and varying levels of pain to bring a woman mind-boggling pleasure, was the one that would hold the upper hand tonight.

That bond had only grown stronger when the dynamic changed. Lucas and Matt were both married now, but Peter wore a St. Christopher’s medal that Matt’s wife, Savannah, had given him for his last Afghanistan tour. He always wore it, like a favor from his monarch’s queen. No one at the table would laugh at the thought. It didn’t matter that they were hell and gone from those part-fantasy times of medieval chivalry—there was a code of behavior they exercised in business as well as personal life. A female journalist for one business magazine had picked up on it, coining them the Knights of the Boardroom. Or Soul-Sucking Predators of the Bayou, depending on who wrote it.

Suppressing a smile, he glanced around the table.

Matt Kensington was every inch their leader, with his hawk features, dark, piercing eyes and powerful build. Savannah, who of course was not present for this guys’ night out, was a golden match for him, delicate as a princess but a tough-as-nails CEO herself, such that Matt had had to employ all their sensual talents to take her down and make her his.

After he cut his heart out of his chest and offered it to her as a fair trade.

Lucas, K&A’s CFO, was hell on wheels with numbers and identifying unprofitable acquisitions that could become moneymakers. He was also an amateur cyclist, which had stumbled him over Cassandra Moira on a cycling trip a year ago. He’d conducted her takeover as relentlessly as any Peter had seen him implement on their unfortunate targets, only his methods had been far more pleasurable and persuasive.

He envied both men their happiness, but was glad for them. Maybe the proximity of all that marital bliss was a contagious disease that couldn’t help but make a man think about the possibility of permanence with a woman. But hell, you needed the right woman for that, and he believed in fate. He didn’t worry about making it happen.

Jon would agree with that. He was the most spiritual of the crowd, into ancient history and philosophies, Tantra and meditation, despite their merciless male ribbing about stretchy shorts and yoga sessions. He would be amused to find Peter had such a Zen take on relationships, but there it was.

Recruiting a family wasn’t in his immediate future, anyway, because being in the National Guard, seeking overseas assignments, was one of the ways he’d decided to give back. He didn’t care if people thought it was old-fashioned or misguided honor bullshit.

He liked bringing and enforcing the peace necessary for people to self-actualize. Having a front-row seat when and if they learned not to live in fear, seeing their kids play in the streets without being blown up . . . It made it all worthwhile.

He’d have time for a family or he wouldn’t, but he was living the life he wanted to live.

And Matt was more than supportive. Peter had no qualms about saying the men at this table were his family, Matt most of all. Peter’s parents had died when he was in his teens.

He’d had a rough time of it, but had entered the army young, done a three-year stint, and then, when he’d sought his degree, Matt had interned him at his burgeoning comp
any, bringing a kid with blue-collar manufacturing aptitude and white-collar business systems understanding into this interior circle, an unconditional acceptance that he’d needed when the bottom fell out of his life.

Ah, hell. He hadn’t drunk enough to be getting this sloppy sentimental. Shifting his thoughts, he focused on the prospect of comfortably slaking his lust on a willing submissive. As Ben made another smartass comment and Jon came back with unruffled transcendentalism, Peter lifted the Macallan to his lips with a smile.

Dana stood in the shadows to the right of the bar as Maria returned. When she glanced at the waitress, Maria gave her a smile, following the direction of her interest. “They’re something, aren’t they? Every one of them handsome as sin. Flew in from Louisiana to give their buddy a send-off. He’s going to Afghanistan next week. ”

“The one at the end. ” Dana noted the military hairstyle, the way the dark blond man held himself upright, even as he enjoyed the male companionship.

“Appears so. ” Maria gave her a considering look. “They’re all Doms, sweet. If you’re looking for a hookup, you could do a lot worse. They wouldn’t be allowed in here if they weren’t decent guys, but my impression is they’re a cut above decent. The two on the inside are married. Wearing the rings and everything, and made it crystal clear they’re just enjoying the view and here for their friend. ”

Dana nodded. The waitress’s reassuring tone suggested she saw how nervous Dana was.

But it was stupid, because she’d blown a wad of money on a temporary membership to The Zone for her two-week leave. She’d looked forward to this night for a while. It had been her decision to come alone. Not really the smartest idea, going to a new fetish club by yourself, but The Zone’s rep was untarnished. Security inside and out, an intense vetting process that had taken the temp membership a couple months in advance to be approved, and she wore a slim bracelet that told staff she was new, so they’d keep an extra eye on her, help her know the ropes. Her lips curved. A good metaphor for a BDSM

club. Her newness might be another reason Maria was giving her the pep talk.

She’d been a sexual submissive since her teens, but of course it had taken some mistakes and tears to figure it out. Once she did, she’d discovered the scene and never looked back. Though unfortunately, accepting and exploring her own sexual nature hadn’t led to the immediate relief of frustration she’d hoped. It was a lot harder to find a compatible Dom worthy of her trust than she’d expected. Ironically, the same thing that made her crave a man’s dominance was the same thing that made her keep them at arm’s length.