Mirror of My Soul, Page 1 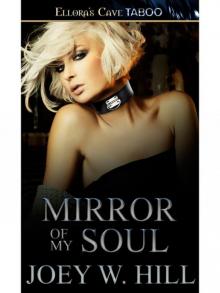 She heard The Zone staff come in but didn’t move, simply too numb to do anything. She must have phased out for a bit, just stroking the back of his thigh, for suddenly she was vaguely aware of an employee reaching under her to release the manacles on his ankles.

“Thanks. Darken the ceiling on your way out, will you?” Tyler’s voice, the only thing that registered. There was the whir of the mechanism, shutting out faces that were probably wondering what kind of show they’d just seen.

The last performance of the Ice Queen.

“They’ll never let me come back. You have no choice but to kick me out now. There isn’t a rule I didn’t just break. ”

“Well, I wouldn’t count on that. I told Perry we were planning a demonstration of what not to do. Like a community service message. ” She knew he was free now but he didn’t disturb her yet, letting her kneel there, holding him. “Do you always anticipate everything?” There was a silent moment before he answered. “No. I didn’t anticipate that I would fall in love with you from the very first moment I saw you. ” She closed her eyes. “No. ” She ducked her head away as he bent down over her, tried to turn her face. “I can’t look at you. I can’t. ” But his fingers insisted, so at length she did. Tilting her chin up, she saw his beautiful eyes full of something far too perfect for her to see. Then she saw more. Two slashes on his face that were open and seeping blood, the skin around them an angry red. The second one had left a cut across his eyelid and the bridge of his nose. His jaw was swelling, where she well could have broken it with the tawser.

Her fingers were on it before she could stop herself. “Oh God, Tyler. I’m—” He laid his lips over hers, taking her words, her hitching breath into himself. When he raised his head, she had nothing, he had it all.

“I’ll endure anything for you, angel. Anything. ” He curved that broad back over her, wrapped his arms around her body. Instead of fighting the touch, the intensity, her body recognized it as a safe harbor. Her fingers latched on to his forearm and her nails dug in, cutting as if she were holding on to a cliff edge.

The sobs rolled over her, taking her, her cries of distress that were much too strangled to be called crying. Tyler thought she sounded as if she was being torn apart from the inside.

He’d made it onto the right path at last. But instead of triumph, at her anguish he could only feel the same pain, the pain of a man who loved her desperately, who only wanted to make her feel better, make every nightmare go away.

Her body was shaking as if she had a fever. Another woman’s face would be wet with tears but it was as if she didn’t know how to cry like that, any more than she’d known how to let herself go, to allow herself physical fulfillment. Her skin was ice cold.

As he comprehended the significance of that, the door beeped, opened.

“Everything under control in here?” It was Mac, his eyes assessing the situation as a cop and a friend. At the moment Tyler was grateful for a person with both to offer. Dan was a quiet shadow at his back, having disengaged the locks for Mac.

“I think she’s in a bit of shock. Can you bring me my jacket there?” He nodded toward the corner in the shadows where they’d hung it.

“Bring them both over but she needs the jacket first. ” Mac nodded to Dan, exchanged a quiet word, closed the door. He brought the jacket and cape, came over and crouched. Marguerite pressed her head against Tyler’s arm, shutting them out. Mac’s eyes noted her nails dug deep into Tyler’s arm.

“Here, angel. ” Tyler tenderly pried her loose, slid her hand into the sleeve.

It had been like this a long, long time ago. Marguerite remembered this haze of nothing, where she had thought nothing would ever make sense again. Then there was the social worker reaching through that haze to find her, with the touch of a hand, a doll and a tea set. She resisted his movement of her but he was a lot stronger and simply made her limbs do as he wished, enveloping her in his jacket, his scent. She immediately rewrapped herself around his leg and arm as soon as he was done.

Tyler winced as her nails clamped down into the same spot but he simply stroked her hair, held her close. “She’ll be all right in a bit,” he said quietly. “Where’s Violet?” Mac reached out, laid a hand on Marguerite’s quivering back. Grazed his fingers over her forehead, gauging her temperature.

“She’s too pissed off. I talked her into letting me come check on you. ”

“Yeah, you look it. ” A corner of Mac’s mouth twitched. “You’re going to need some medical attention. ”

“I’ve had worse beatings in my life. ”

“Just wait until Violet gets done with you. ” Mac stood. “You owe me one. She’s going to make my life hell for the next few days for keeping her out of here when she let loose on you. ”

“Did you sit on her or use a headlock?”

“You laugh now but Mistresses can be meaner than hell when crossed. ” His gaze lingered on the ugly swellings on Tyler’s face. “I expect you know that. ”

He retreated, closing the door, leaving them alone.

He smiled against her hair but his heart tightened at the rough quality of her voice.

She raised her head and her grip on his arm eased at last. She looked as if everything had been drained away, leaving her skin drawn taut, those blue eyes dominating her face. “And who will take care of you?”

“Well, if you want to rub aloe all over my body, I guess I won’t object. ” As he stroked her hair away from her cheek she sat very still under his touch, staring at him.

“Tyler, you know I can’t do this. You need to hear me for once. There’s a reason I choose to be the way I am. The alternative is…” Her fingers reached up abruptly, touching his jaw. “This is the alternative for me. ”

“No, it’s not. There’s another path. You know it. You accepted it, even if only for a few minutes. That’s what scared you so much. ” He lifted her chin, brought his mouth close to hers as her lips trembled open.

“Say it to me, Marguerite. Say the word that’s in your heart, the reason you’re on your knees now. ”

She ducked her head but he caught her chin. Taking her hand, he placed it on the side of his face.

“Your mouth may not be able to say it but every other part of you is. ” He knew he shouldn’t push right now but the images were in his head. The fierce light in her eyes, the taunt of her body displayed before him, rubbing up against him.

The break in her eyes when she knew. Even the energy she put into the beating. Every part of him ached but there was a violent need in him.

He caught her throat in his hand, kissed her. Not gently this time. Despite her vulnerable condition his intuition told him the moment required hard, brutal demand.

His hands running down her arms, over her back, holding her against his bare chest, his tongue invading her mouth, his teeth tasting her. When she made a soft cry that vibrated against his grip, he tangled his other fist in her hair, held it as her nipples hardened against his chest. Reaching down, he put a hand between her legs and shoved the dress up to find her wet and slick, her thighs trembling.

“Say it, angel. Or I fuck you until you do, until you’re screaming it every time you climax. ”

“No. I already told you, that’s not an option. ” He b
rought his hold back to her throat, felt her telltale shudder at the contact while he remembered how she’d constricted his breathing. How he hadn’t cared if she strangled him, if only she’d put her lips on his and give him oxygen from the body he craved. “Marguerite. ”

“We both know you’re mine. ” Because every fucking beat of my heart is yours.

Passing his hand over her shoulder blades, he felt her shiver with a combination of desire and terror both. The former heightened his lust for her, the latter roused his urge to protect. The Dom in him responded to both.

When he laid his palm on the back of her neck he felt the wisps of hair brush his knuckles. Leaning in, he kissed the top of her head. “All right, then. I’ll let it go for now.

I need to talk to Perry a moment to make sure we’re all square but then we’ll get you home. ”

He surprised her, not just with the sudden withdrawal of demand but by simply scooping his arms under her and lifting her, not even giving her the option of rising. He set her in an occasional chair that was in the shadows. The chair was intended for a weak-kneed sub or as a comfortable seat from which a Mistress could contemplate the artistry of her bound submissive. Or she could make him bend over it and place his lips on the cushion where she’d just been while she fucked him with an impressively intimidating dildo. Marguerite had used it for all those reasons. Never because she couldn’t stand well enough on her own two feet.

She had to pull herself together. She couldn’t let herself believe even for a moment in the fantasy of someone else doing it for her. He kept his profile to her, glancing at her often as he dressed. Socks, underwear, tucking that appealing cock in the snug boxers, pulling up the slacks, belting them. She knew he had to be hurting like hell but not once under her unwavering gaze did he flinch. She knew part of it was male pride but she also suspected it was that chivalry of his that wouldn’t let her suffer the full guilt of knowing how much she’d hurt him.

At the height of her frenzy it had even crossed her mind to destroy him, obliterate him entirely, as if the emotional pain he’d drawn from her made him as bad as the source of the pain. At that moment she could no longer distinguish friend from foe and all that mattered was the solitude. Destroying everything so it would be quiet in her head. She wouldn’t even care if they took her away and put her in a room by herself forever, her only job to stare at padded walls and wait for the oblivion of the final injection.