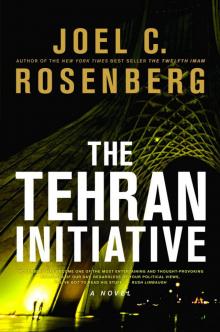 This novel is a work of fiction. Names, characters, places, and incidents either are the product of the author’s imagination or are used fictitiously. Any resemblance to actual events, locales, organizations, or persons living or dead is entirely coincidental and beyond the intent of either the author or the publisher.

To all our friends in Iran and the Middle East, yearning to be free.

William Jackson—president of the United States

from The Twelfth Imam

David Shirazi wondered if they’d even make it to the safe house in Karaj.

As he inched forward in Tehran’s stop-and-go traffic toward Azadi Square, he saw the flashing lights of police cars ahead. Despite the roar of jumbo jets and cargo planes landing at Mehrabad International Airport, he could hear sirens approaching. Beside him sat Dr. Najjar Malik, the highest-ranking nuclear scientist in the Islamic Republic of Iran and the most valuable defector to the Central Intelligence Agency in a generation.

Najjar stiffened. “Then we need to get off this road.”

David agreed. The problem was that every side street from here to the square was clogged with hundreds of other drivers trying to find their way around the logjam as well.

“We’re going to have to get rid of this car.”

“The moment a police officer runs these license plates, he’s going to come up with your name. We don’t want to be in the car when that happens.”

Without warning, David pulled the steering wheel hard to the right. He darted across two lanes of traffic, triggering a wave of angry honks.

Under no circumstances could he allow himself to get caught or implicated in the extraction of Najjar from the country. To do either would blow his cover and compromise all the work he’d done. The Twelfth Imam’s inner circle would never use the new satellite phones he’d just provided them. The MDS technical teams would be thrown out of the country. The CIA’s multimillion-dollar effort to penetrate the Iranian regim
e would be ruined. And given that Iran now had the Bomb, the CIA needed every advantage it could possibly get.

David heard a siren behind them. He cursed as he glanced in his rearview mirror and saw flashing lights about ten cars back. He guessed that a police cruiser had spotted his rapid and reckless exit from Azadi Road and gotten suspicious. Najjar, cooler than David would have expected under the circumstances, bowed his head and began to pray. David admired his courage. The worse things got, the calmer the man became.

The siren and flashing lights were getting closer. David turned the wheel, jumped the curb, pulled Najjar’s car off the congested street and onto the sidewalk, and hit the accelerator. Pedestrians started screaming and diving out of the way as David plowed through trash cans. The police cruiser was left in the dust, and David let himself smile.

The escape, however, was momentary. By the time they reached Qalani Street and took a hard left, another police cruiser was waiting. David wove in and out of traffic, but despite blowing through one light after another, he was steadily losing ground. Najjar was not praying anymore. He was craning his neck to see what was happening behind them and urging David to go faster. The road ahead was coming to an end. David suggested Najjar grab the door handle and brace for impact.

“Why?” Najjar asked at the last moment. “What are you going to do?”

David never answered. Instead, he slammed on the brakes and turned the steering wheel hard to the right, sending the car screeching and spinning across four lanes of traffic.

They were hit twice. The first was by the police cruiser itself. The second was by a southbound delivery truck that never saw them coming. The air bags inside Najjar’s car exploded upon impact, saving their lives but filling the vehicle with smoke and fumes. But theirs was not the only collision. In less than six seconds, David had triggered a seventeen-car pileup on Azizi Boulevard, shutting down traffic in all directions.

David quickly unfastened his seat belt. “You okay?” he asked.

“Are we still alive?”

“We are,” David said, checking his new friend for serious injuries. “We made it.”

“We needed a diversion.”

David couldn’t get out his own door. It had been too badly mangled. So he climbed into the backseat, which was littered with shards of broken glass, and kicked out the back passenger-side door. He jumped out of the car and surveyed the scene. It was a terrible mess in both directions.

The police car was a smoldering pile of wreckage. Gasoline was leaking everywhere. David feared a single spark could blow the whole thing sky high. Inside, the solitary officer was unconscious.

Using all of his strength, David pried the driver’s-side door open and checked the man’s pulse. Fortunately, he was still alive, but he had an ugly gash on his forehead, and his face was covered in blood. David pocketed the officer’s .38-caliber service revolver and portable radio. Then he pulled the officer far from the wreckage and laid him down on the sidewalk.

David hobbled back to Najjar’s car, realizing his right knee had gotten banged up worse than he’d first realized. He looked down and noticed his pants were ripped and that blood was oozing from his leg.

“You ready to move?” David asked, coming over to the passenger side.

“I think so,” Najjar said, his arms filled with the laptop and accessories.

They walked north about a hundred meters. Then David turned, pulled out the .38, aimed at the gas tank of Najjar’s crumpled Fiat, and pulled the trigger. The car erupted in a massive ball of fire that not only obliterated the vehicle but all traces of their fingerprints and DNA as well.

“What was that for?” a stunned Najjar asked, shielding his eyes from the intense heat of the flames.

David walked north down the center of Azizi Boulevard.

He limped his way past wrecked cars and distraught motorists fixated on the fire and smoke, with Najjar close behind. He clipped the police radio to his belt and put in the earphone. Just then, his phone vibrated. It was a text message from his CIA colleague, Eva Fischer, telling him to call their boss, Jack Zalinsky, in the secure mode. He did so right away, but it was Eva who actually picked up.

“Have you gone insane? The entire Global Operations Center is watching you via a Keyhole satellite. What are you doing?”

The chatter on the police radio suddenly intensified. “I can’t really talk now,” David said. “Do you need something?”

Suddenly shots rang out, shattering a windshield beside them. Instinctively David hit the ground and pulled Najjar down with him between a Peugeot and a Chevy, dropping his phone as he did. People started screaming and running for cover. He could hear Eva yelling, “What is that? What’s going on?” but he had no time to respond. He grabbed the phone and jammed it into his pocket. Ordering Najjar to stay on the ground, he pulled the revolver and tried to get an angle on whoever was shooting at them.

Two more shots rang out, blowing out the windshield of the Peugeot. David again flattened himself to the ground and covered his head to protect himself from the flying glass. He could see under the cars that someone was moving toward him. He got up and took a peek. Another shot whizzed by him and ripped into the door of the Chevy.

Dead ahead, maybe ten yards away, was a garbage truck. David made sure Najjar was okay, then made a break for the back end of the truck. His movement drew more fire. But it also gave him a chance to see who was doing the shooting. The blue jacket and cap were the giveaway. This was a Tehran city police officer.

Then the officer’s voice crackled over the radio.

“Base, this is Unit 116. I’m at the crash site. One officer is down with multiple injuries. Witnesses say they saw someone steal the officer’s service revolver. I’m currently pursuing two suspects on foot. Shots fired. Requesting immediate backup.”

This was not good. David crept along the side of the garbage truck, hoping to outflank the officer from the right, then stopped suddenly when he heard the sounds of crunching glass just a few yards ahead.

David tried to steady his breathing and carefully choose his next move as the footsteps got closer and closer. He could hear more sirens rapidly approaching. He was out of time. He took three steps and pivoted around the front of the truck, aimed the .38, and prepared to pull the trigger. But it was not the officer. It was a little girl, no more than six, shivering and scared.

How did she get here? Where is her mother?

Three more shots rang out. David dropped to the ground and covered the girl with his body. He took off his jacket and wrapped her in it, then got back in a crouch and tried to reacquire the officer in his sights.

But now there were two.

David had a clean shot at one of them, but he didn’t dare fire from right over the child. He broke right, hobbling for a blue sedan just ahead. Once again, gunfire erupted all around him. David barely got himself safely behind the sedan. He gritted his teeth and caught his breath, then popped his head up again to assess the situation. One of the officers was running straight toward David, while the other started running toward Najjar. David didn’t hesitate. He raised the revolver and squeezed off two rounds. The man collapsed to the ground no more than six yards from David’s position.

David had no time to lose. Adrenaline coursing through his system, he made his way to the first officer, grabbed the revolver from his hand, and sprinted toward the second officer. Racing through the maze of cars, he approached the garbage truck, stopped quickly, and glanced around the side. The second officer was waiting for him and fired. David pulled back, waited a beat, then looked again and fired.

The man fired three more times. David dove behind the Chevy, then flattened himself against the
ground and fired under the car at the officer’s feet. One of the shots was a direct hit. The man fell to the ground, groaning in pain. David heard him radioing for help and giving his superiors David’s physical description. Then, before David realized what was happening, the officer crawled around the front of the Chevy, took aim at David’s head, and fired again. David instinctively leaned right but the shot grazed his left arm. He righted himself, took aim, and squeezed off two more rounds at the officer’s chest, killing the man instantly.

David’s mobile phone rang, but he ignored it. They had to get out of there. They couldn’t let themselves be caught. But Najjar was nowhere to be found.

Again his phone rang, but still he ignored it. Frantic, David searched for Najjar in, behind, and around car after car. This time, his phone vibrated. Furious, he checked the text message only to find this message from Eva: 3rd bldg on rt.

David suddenly got it. He glanced up in the sky, thankful for Eva and her team watching his back from two hundred miles up. He made his way up the street to the third apartment building on the right. His gun drawn, he slowly edged his way toward the entrance.

The Tehran Initiative by Joel C. Rosenberg / Thrillers & Crime have rating 4 out of 5 / Based on32 votes