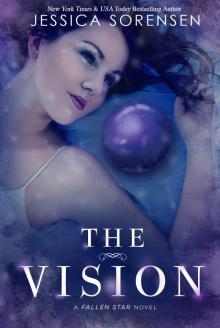 I kept having these dreams, or maybe they were more like nightmares. In them, Alex and I are standing out by the entrance to The Underworld. The lake is frozen and the trees are iced over with icicles dripping from the branches. The sky is as dark as a shadow and the air chills me to the bone. Alex is holding me, his arms are wrapped tightly around me. We stay at the edge of the frozen water, clutching onto one another as if our lives depend on it.

The wind is blowing my hair into my face. There is a hollowness to the outside, like nothing is there but Alex and I, as if the whole world is empty. As we hold each other, a thought occurs to me that we are not supposed to be together, and if we don’t let go, we will die. I look up at Alex and tell him my thoughts, but he always shushes me as he brushes my hair away from my face.

“It will be alright,” he whispers, but his bright green eyes tell me the opposite. It won’t be okay, they say.

I open my mouth to tell him that I know he’s lying, but a crackle ripples through the air and sucks the words away from my lips. I see them—the black hooded figures emerging from the trees, like an army of ice-monsters heading to destroy us.

I look at Alex, wanting him to say something—to do something—but he never does. He just sweeps my hair back and pulls me closer to him.

“It will be alright,” he whispers one last time, and then I am suffocated by light. I hold onto Alex and take a deep breath as I am engulfed by warmth.

It will be alright.

But will it? Because every time I have this dream, I always wake up, lying on the floor of the cabin, stuck out in the middle of the snow-buried mountains. And in the snow lies my weakness. Praesidium. The one thing that renders me of my Foreseer power and binds me to the cabin for as long as Stephan wishes. Yes, I always wake up from my dream, but sometimes I wish I wouldn’t.

I have been stuck in the cabin, where Stephan had left me, for nine days now. And each morning I watch the sun rise through the barred window, is another morning where my sanity is coming to its end. If I thought my life with Marco and Sophia had been lonely, then I had no idea what lonely was. Because this was the mere definition of lonely.

There was nothing in the cabin besides a bathroom. Stephan left a box of food, I guess, not wanting me to starve to death. He wanted me alive—he made that very clear. He just wanted my mind and emotions gone, which, if things kept going the way they were, would probably happen pretty quickly.

I wasn’t in that great of shape either. The spot where I hit my head on the rock, when Nicholas had shoved me down, constantly hurt, and I worried it might be getting infected. There was also only one blanket in the cabin and I constantly had to keep it wrapped around me, otherwise, I would freeze to death.

It was the same thing every day for nine days straight. I sat there on the cold, hardwood floor, curled up in a blanket that smelled like dust and moth balls, and stared out at the snowy mountains that were decorated with marble-sized, lavender balls of Praesidium.

But on the ninth day I lost it.

I was lying on the floor tracing the cracks in the floorboards with my fingers, when I suddenly realized something. Before I knew what I was doing, I stood up and went over to the front door. I swung it open and, ignoring the blast of Arctic wind that smacked me in the face, I stepped out into the snow, barefoot and in shorts, with a blanket wrapped around my shoulders.

I wasn’t sure where I was going, or if I would even make it very far, but I knew I could not stay here and give up.

Stephan would not win. Either I would escape, or I would die trying.

I would not let the world end.

I started down the mountain, shivering, shaking, and chattering until my muscles felt like they were going to break. But I forced myself to keep going, keeping my eyes on the Praesidium as I walked, wishing desperately that the trail of lavender marbles would finally end so I could foresee my way back to Maryland.

But as the wind kicked up, and the air dipped even colder, I knew.

I was going to die.

My body tensed. “Who is that?” I called out through the light.

“Come toward me?” the voice echoed.

I blinked, searching the light for someone, but I couldn’t tell what was up or down, or if I was even standing or sitting.

“Yes, you can,” the voice assured me. “You just have to look harder. ”

If the voice didn’t sound so unfamiliar, then I would have thought I was talking to Nicholas, because it seemed like something he would say. But this voice was much deeper and belonged to someone older.

So, not wanting to be difficult to a stranger, I blinked a few times, trying to “look harder. ” Strangely enough, the light began to dim. Slowly at first, and then much quicker, until there was nothing left but a faint glow.

I could see now that I was lying on a midnight-blue marble floor, staring up at what looked like a cathedral ceiling. I got to my feet and examined myself over. My skin was its normal pale color and it appeared that the cold hadn’t frostbitten any of my toes or fingers.

“Hello!” I called out, turning in a slow circle. The pale light fogged my surroundings, making it hard for me to see. But I could make out a row of columns on each side of me and a statue not too far off in front. I walked toward the statue, taking each step carefully, afraid that at any second someone—or something—was going to jump out from behind one of the columns.

I managed to make it to the statue unharmed, and without anyone jumping out at me. It was a statue of a man carved of white marble. There was something about the man’s face that looked familiar, but what had me puzzled even more was that in his hands was a crystal ball.

“What in the world,” I mumbled to myself. I leaned in to get a closer look at the plaque mounted at the statue’s feet. My pulse quickened as I read the plaque: Julian Lucas. Lucas? No. There was no way…Could this be a statue of my father?

I covered my mouth with my hands and started to back away.

I whirled around and then jumped back when I came face-to-face with a man that had a striking resemblance to the statue, only he was alive and breathing.

“Oh my God. ” My voice trembled. I couldn’t believe it. His eyes…the color…violet. “Dad?”

I had thought the alarming violet color of my eyes had been created from the star’s energy. But I was wrong because the man standing before me had the exact same alarming shade of violet radiating from his eyes.

“I—I…can’t…” Apparently, I had forgotten how to speak.

He gave me an understanding smile. “I know, it’s shocking, isn’t it?”

We stared at each other, not believing what we were seeing. He looked so much like me; the same color of brown hair, the same pale skin—only his was creased with wrinkles—and of course the same shade of violet in his eyes.

He considered this carefully. “While you were walking down the mountain, you passed out and took yourself here in vision form. ”

I swallowed hard. “So my body is still back on the mountain freezing to death?”

“Yes, but don’t worry, today isn’t the day you’re going to die, Gemma. ” He turned around, the strange silver robe he was wearing swishing behind him. He motioned for me to follow him. “We only have a few minutes before you have to go back, and I have something very important I need to show you. ”

“Okay…” I followed him, glancing around as I walked, wondering what this place was. “What do you need to show me?”

He looked at me, his violet eyes sparkling in the pale-yellow light that fluttered through the room. “I’m going to show you how you’re going to save the world. ”

I don’t know why, but I just about laughed at him. “You’re going to show me,” I pointed at myself, “how I’m going to save the world?”

“You sound like you don’t believe it’s possible,” he said.

I shrugged. “It’s just that I’ve seen things that have led me to believe otherwise. ”

“You have seen them in your visions,” he said, not as a question, but as a statement.

I gaped at him. “So, you know about my visions?”

He gave me a small smile as he turned down a hallway, lined with more columns and a ceiling swirled with yellows and blues that reminded me of Vincent van Gogh’s The Starry Night. “Where do you think you got the gift?”

“So you’re a Foreseer. ” I wasn’t really surprised by this, seeing how I had been told multiple times that abilities, such as the Foreseer ability, was usually a hereditary thing. Plus, I just saw the statue of him holding a crystal ball.

He nodded. “I am. And, like you, I also have unique abilities. ”

Now that shocked me and I tripped over my own feet, catching myself before I dove onto the marble floor. “The same abilities as me?” I asked

“Yes, but that is a story for another time,” he told me, looking sad. “Right now, you need to save the world. ”

I had a ton of questions. I mean, this was my first time meeting him, and I wanted to know about him. But there was an urgency in his voice that kept me quiet.

At the end of the hall, a stairway stretched up to a mausoleum-like building. Two massive columns formed an entryway around the door, and at the top of the door, a bright red light glowed from the screen-covered window.

“What is this place?” I asked, hoping that it just looked like a mausoleum.

He didn’t answer as he walked up the stairs to the mausoleum in question. I followed him, the marble steps feeling cold underneath my bare feet as I climbed up the stairs. I was nervous and my heart fluttered in my chest as my father opened the door. The hinges creaked loudly, as if it had been sealed shut for ages. Then he stepped in, and, with great hesitance, I did too.

It was dark inside the tiny room and the air was damp. The ceiling dripped with muddy water and the once white-tiled floor was stained brown with age. There were no windows and the column walls were cracked and worn away. Red lanterns softly lit a trail of red light down a narrow hallway.

“This way,” my father told me, gesturing down the hall.

The Redemption of Callie & Kayden

The Coincidence of Callie & Kayden