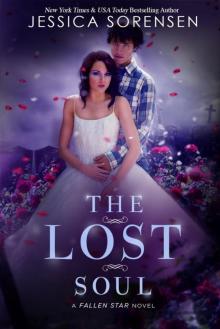 There’s no electricity, no humming on my skin. But standing in the field beside him, I feel electrified, like the lightning flashing across the cloudy sky.

“This is silly. ” I frown at Alex and pout out my lip. “We’ve been trying for weeks and I still can’t get it right. ”

A crooked smile plays at his lips. His green eyes shine lustrously. His dark brown hair is a mess all over his head and dangles in his eyes. “You’ll get there. Practice makes perfect, right?” He saunters behind me and leans his head over my shoulder. “If you want to break into the City of Crystal, to get your dad back, you’ll have to be able to protect yourself. Dyvinius and the Foreseers aren’t going to go down without a fight. ”

I square my shoulders and summon some determination. The wind tangles my brown hair and Alex sweeps it to the side. Clutching the knife, I aim the blade at the target mounted on the tree.

Releasing a breath, I flip the knife through the air toward the target. It flies like a dart, but stops several feet short of the tree, curving down and stabbing into the grass.

“You’ll get it. ” Alex lets out a breath. “You want to practice using the sword instead?”

I tilt my head back, meeting his eyes. “Why does it feel like you’re trying to turn me into a ninja?”

“I’m not. I’m trying to teach you how to defend yourself. ” He pauses, his eyes darkening with a look that makes my skin heat. “Although, you’d make one hell of a hot ninja. ”

My face remains stoic, even though my stomach spins a somersault. “Yeah, let’s move onto the sword. I think the grass has had enough of my bad aims for one day. ”

He nods and heads to his old cherry-red Chevy Camaro to collect the swords. I hike to the tree and pick up the knife. It’s verging on springtime, the leaves blossoming, the grass crisping with the warmer air. Lilacs flourish all around and the forest sings a gentle breeze. There’s peacefulness in the air, but it’s unnerving. Every time it’s quiet, uneasiness plagues me. Even though Stephan and the Death Walkers are gone and the portal can’t open, I fear danger and death are always around the corner, waiting for the perfect time to strike.

“You okay?” Alex waves his hand in front of my face. “What are those pretty violet eyes of yours staring at?”

“You’re worrying again. ” He rubs his jawline and adjusts the duffel bag on his shoulder. “I told you everything’s going to be fine. No one’s out to get us. We’re out to get them. ”

We move to the middle of the field, where the grass is shorter and drier. Thunder booms and lightening reflects in our eyes.

“Are you sure we’re safe out here?” I glance at the dark sky.

“I do. ” I elevate the jagged blade engraved with the inscription: mortem ubique.

He poises his sword in front of him and arches an eyebrow. “You ready?”

He stalks me like a rival, but he won’t hurt me. My feet are rooted to the ground. When he gets close, I spring forward and swing. He shields his knife up and our blades clink together. I twirl quickly and bring the sword around again, hoping that I don’t actually hit him. He ducks and his hand snakes around my waist. He lurches me into him and my sword falls to the grass.

Alex laughs softly and his fingers explore my skin. “Rematch?”

I sigh, resting my head against his shoulder. “I think I might—”

I’m interrupted by the ground, vibrating violently beneath our feet. Alex’s grip tightens on my hip as we’re jolted sideways. The grass splits apart and the dirt rises. He stabs the sword in the dirt and forces our weight on it. But our feet lose traction as the field opens up, striving to swallow us whole.

I grasp onto Alex as my feet dangle into the bottomless hole. I blink, trying to foresee us the hell out of the way, but my head fills with a buzz that crushes inside my skull.

“Hold on!” he screams, shifting his feet onto the flat land. Still holding me with one hand, he rolls on his stomach and catches my other hand. Fighting against the world, he hauls me up, a shoe slipping off and disappearing into the darkness.

We collapse, panting, pulses racing. As the earth rumbles, we scurry to our feet and dash for the car. The ground waves after us, thunder booms, lightning strikes at the trees. It’s the end of the world coming down on us. Again.

Then just as suddenly as the insanity began, it ceases. We halt and slowly turn around. Dirt has overtaken the grass. Trees are singed to a crisp and the sky is inactive and silent. Expanding out of the hole in the ground is a large willow tree. There is a person standing by the coarse trunk, but the branches cape down, shielding the person’s identity. But it’s a person I think I know.

Alex starts for the tree, but I draw him back, shaking my head. “Don’t… that tree’s from The Afterlife. ”

His eyebrows furrow as his eyes drift to the willow tree. A woman steps from underneath the wispy branches. Her white hair dances around her elongated face, her red lips are pursed together, and her silver eyes shimmer.

Alex aims the sword at her. “Why are you here?”

Annabella—the Queen of Essences—smoothes the wrinkles in her white dress, her eyes targeted on us, her lips refusing to speak.

Alex charily steps for her, a warning lacing his tone. “Annabella, what do you want?”

She smiles, motioning her hand, beckoning us to come closer.

Alex doesn’t listen. He holds my hand, edging us closer to Annabella and the willow tree. After we’re within arm’s reach, Annabella’s mouth creeps to a smile. Her skin crumbles from her face. Her hair alters from white to grey, her lips thin out, and her silver eyes hollow into her head.

“It’s a trick!” I back away from the Queen of the Afterlife, towing Alex with me. But his feet stay planted. “Alex, come on!”

Shaking my head, I tug fiercely on Alex’s hand. “No! You can’t take him! Not without me!”

“Oh, but I can. ” Her wicked snicker echoes. “You out of all people should understand every situation has a loophole. ”

She’s right. On my list of life lessons, loopholes are number one.

“No!” I grunt and dig my sneakers into the dirt, heaving Alex with every ounce of my strength.

He won’t budge, hypnotized by the Queen. He strides for her, wiggling his hand free from mine.

I fall on my butt. “Alex!” I scramble to my feet, but slam against an invisible wall guarding me from the willow tree. I bang my fists on the wall. “You can’t take him! Not without me!”

It’s too late. Alex is beside her as the tree sinks back below the ground. Hot tears escape my eyes. I let out a bloodcurdling scream. “This was all supposed to be over!”

The only answer is the crash of the thunder.

I jolt awake, gripping the blanket, drenched in sweat, my heart pounding like a madman inside my chest. Silver and blue lightning bolts flash and thunder clatters at the bedroom window. It was just a dream, I tell myself. But being a Foreseer, dreams aren’t always just dreams. Sometimes they’re warnings of the impending future. Alex and I eluded death once, because our souls are connected; something we discovered after sacrificing our souls for each other
’s lives. I handed mine over to Helena, the Queen of The Afterlife, who reins over the lost and tortured souls. Alex gave his to a greedy banshee, who was collecting free souls to gain power in the hope of taking the Queen of The Afterlife’s place. But Annabella released us from our duty, stating neither the Queen nor the Banshee could just take one of our souls—they’d have to take them together. It was then that I learned good still existed in the world, because she could have turned both our souls over to one of them.

I climb out of bed, wrap my arms around myself, and pad to the door. The Keepers’ castle is always cold. After moving in, I discovered the brick structure is ancient, with only fireplaces to heat the rooms.

I hurry down the hall, hoping I don’t wake up anyone. I stop in front of Alex’s bedroom door. It’s late and I almost leave. But worry nags my gut. I have to see him—I have to know he’s okay.

My fist falls against the door. “Alex. ” Silence returns my knock and I rap on the door again. The sound of my knock reverberates loudly through the sleeping castle. “God, he sleeps like the dead. ” I sigh and soundlessly push the door open.

His room is dark. I feel my way around the wall and to his bed. “Alex, wake up. ” My fingers search for him, but only encounter the blankets and pillows. My heart constricts in my chest as I remember the dream.

I jump at the sharp snap of the thunder. Rain rushes down, striking the window like needles “Damn it,” I curse under my breath, hyped up over nothing.

Arms envelop my waist and draw me back. It’s Alex and I relax, breathing in the warmth flowing from his skin.

“Where were you?” I turn, seeking his eyes through the darkness.

He’s close, shirtless, wearing black drawstring pajama bottoms. He tucks a strand of my hair behind my ear, his lips a sliver away from mine. “Getting a drink of water from downstairs… What are you doing up this late at night? In my room?”

“A bad one?” he questions. Lightning blazes outside the window, illuminating the room and his bright green eyes.

I nod, swallowing the lump in my throat. “It definitely wasn’t the best dream I’ve had. ”

“You want to tell me about it?” he asks, sketching my lips with his thumb.

I yawn. “Not right now. But in the morning I do. I just needed to see if you were okay. ”

“Okay,” he says, understanding the dream was about him.

I give him a small hug and start to depart for the door. His arms tighten and he urges my body against his, so every part of us is touching.

“You should stay,” he whispers, his warm breath feathering my cheek.

I hesitate, my gaze skimming to his bed. Whenever things get too heated between us, my emotions get the best of me. Some of them are so fresh that I have a hard time dealing with them. Eventually, I’ll have to learn or our relationship will go nowhere.

“We’ll just sleep. ” He laughs at my rigid reaction. “Jeez, Gemma, get your mind out of the gutter. ”

I shake my head and playfully shove him. Then we climb into his bed. I’m wearing plaid pajama shorts and my legs are ice-cold. I tuck my feet under his legs to warm them up.

“It’s really coming down out there. ” He observes the rain splashing against the window.