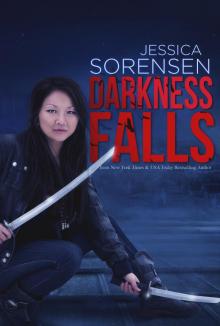 This book is a work of fiction. The names, characters, places, and incidents are products of the writer's imagination or have been used fictitiously and are not to be construed as real. Any resemblance to persons, living or dead, actual events, locales or organizations is entirely coincidental.

All rights are reserved. No part of this book may be used or reproduced in any manner whatsoever without written permission from the author.

Rule #1—Never go out after dark.

Rule #2—Always have a weapon in hand.

Rule #3—No matter what, never EVER get bit.

The sky is black, the streets are full of cries, and my clothes are drenched with either rain or blood. Maybe both. I’ve broken a rule and the consequences could be disastrous.

Rule #1—Never go out after dark.

The sky is thick with smoke that rises from the fires constantly burning within the city walls. The broken buildings, lost in the dirt of disease, tower the sides of the debris-covered roads. Abandoned cars thick with rust and fragmented glass wedge the streets. I leap over the hood of one and swing a sharp right, dipping down into the underground tunnels, away from the dead city, away from them. But a hand grabs the collar of my shirt and I’m yanked backward.

My weapon slips from my fingers and clanks to the ground.

The monster snarls, fangs gleaming, drool dripping from its rotting lips. I squirm from its grip and dodge to the right, but another one appears, just as hungry. I’m cornered. I press my back against the concrete walls soaked with filthy water, which seeps deep into my clothes.

This is the closest I’ve ever been to one. My amazing speed and quickness makes it hard for them to catch me. Tonight, I’m off though. Tonight, I’m worried about Maci.

It’s as dark as death, but I can still make out the blood dripping from the monsters eyes and the gaping wounds mapping its flesh. Its fangs tremble for my neck, desperate to devour—needing to feed. I search the ground for my weapon—I need my weapon.

But it seizes me by the shoulders and digs its fleshless fingers into my arms. My skin starts to give. If it breaks, I’ll be infected. I should be afraid—I should fear for my life. But I don’t.

I kick the monster between the legs, but it doesn’t faze. Maybe it’s not male? Male or not, I’ve pissed it off. It tips its head back and growls. Then its other arm springs forward and it clutches my throat. Blood pours from its eyes like rain from the sky. I ram my elbow into its chest, hard. But it barely budges. It’s a strong one.

And humans are weak.

It dips its nose toward my neck and takes a deep whiff, like I’m a top grade sirloin steak. I whack it in the chest and kick it in the shin, refusing to give up. Finally, it loses balance and stumbles backwards. Not missing a beat, I skitter around it and swerve around the other one. Then I run.

But I fall after a few steps, my nose cracking against the concrete. I roll over and the monster hovers above me. The more blood that drips from its eyes, the hungrier it is. And this one’s eyes are pouring water like a rainstorm. It assesses me, death staring me in the eyes. Yet I am not afraid. I should be terrified, but I never am.

The monster’s lips part. “No!” It cries.

My blood freezes. I’ve never heard one speak. I didn’t think they could speak.

It turns from me and wanders back down the tunnel, the other one following closely behind.

I stay on the ground, my jaw slack with shock. Because vampires never EVER leave humans alive.