Three Men in a Boat 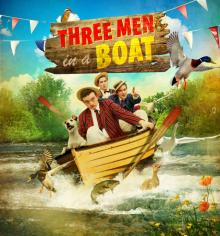 THREE MEN IN A BOAT (_TO SAY NOTHING OF THE DOG_).

_The chief beauty of this book lies not so much in its literary style_,_or in the extent and usefulness of the information it conveys_, _as inits simple truthfulness_. _Its pages form the record of events thatreally happened_. _All that has been done is to colour them_; _and_,_for this_, _no extra charge has been made_. _George and Harris andMontmorency are not poetic ideals_, _but things of flesh andblood--especially George_, _who weighs about twelve stone_. _Other worksmay excel this in depth of thought and knowledge of human nature: otherbooks may rival it in originality and size_; _but_, _for hopeless andincurable veracity_, _nothing yet discovered can surpass it_. _This_,_more than all its other charms_, _will_, _it is felt_, _make the volumeprecious in the eye of the earnest reader_; _and will lend additionalweight to the lesson that the story teaches_.

[Picture: Graphic of three men in a rowing boat]

There were four of us--George, and William Samuel Harris, and myself, andMontmorency. We were sitting in my room, smoking, and talking about howbad we were--bad from a medical point of view I mean, of course.

We were all feeling seedy, and we were getting quite nervous about it.Harris said he felt such extraordinary fits of giddiness come over him attimes, that he hardly knew what he was doing; and then George said that_he_ had fits of giddiness too, and hardly knew what _he_ was doing.With me, it was my liver that was out of order. I knew it was my liverthat was out of order, because I had just been reading a patentliver-pill circular, in which were detailed the various symptoms by whicha man could tell when his liver was out of order. I had them all.

It is a most extraordinary thing, but I never read a patent medicineadvertisement without being impelled to the conclusion that I amsuffering from the particular disease therein dealt with in its mostvirulent form. The diagnosis seems in every case to correspond exactlywith all the sensations that I have ever felt.

[Picture: Man reading book] I remember going to the British Museum oneday to read up the treatment for some slight ailment of which I had atouch--hay fever, I fancy it was. I got down the book, and read all Icame to read; and then, in an unthinking moment, I idly turned theleaves, and began to indolently study diseases, generally. I forgetwhich was the first distemper I plunged into--some fearful, devastatingscourge, I know--and, before I had glanced half down the list of"premonitory symptoms," it was borne in upon me that I had fairly got it.

I sat for awhile, frozen with horror; and then, in the listlessness ofdespair, I again turned over the pages. I came to typhoid fever--readthe symptoms--discovered that I had typhoid fever, must have had it formonths without knowing it--wondered what else I had got; turned up St.Vitus's Dance--found, as I expected, that I had that too,--began to getinterested in my case, and determined to sift it to the bottom, and sostarted alphabetically--read up ague, and learnt that I was sickening forit, and that the acute stage would commence in about another fortnight.Bright's disease, I was relieved to find, I had only in a modified form,and, so far as that was concerned, I might live for years. Cholera Ihad, with severe complications; and diphtheria I seemed to have been bornwith. I plodded conscientiously through the twenty-six letters, and theonly malady I could conclude I had not got was housemaid's knee.

I felt rather hurt about this at first; it seemed somehow to be a sort ofslight. Why hadn't I got housemaid's knee? Why this invidiousreservation? After a while, however, less grasping feelings prevailed.I reflected that I had every other known malady in the pharmacology, andI grew less selfish, and determined to do without housemaid's knee.Gout, in its most malignant stage, it would appear, had seized me withoutmy being aware of it; and zymosis I had evidently been suffering withfrom boyhood. There were no more diseases after zymosis, so I concludedthere was nothing else the matter with me.

I sat and pondered. I thought what an interesting case I must be from amedical point of view, what an acquisition I should be to a class!Students would have no need to "walk the hospitals," if they had me. Iwas a hospital in myself. All they need do would be to walk round me,and, after that, take their diploma.

Then I wondered how long I had to live. I tried to examine myself. Ifelt my pulse. I could not at first feel any pulse at all. Then, all ofa sudden, it seemed to start off. I pulled out my watch and timed it. Imade it a hundred and forty-seven to the minute. I tried to feel myheart. I could not feel my heart. It had stopped beating. I have sincebeen induced to come to the opinion that it must have been there all thetime, and must have been beating, but I cannot account for it. I pattedmyself all over my front, from what I call my waist up to my head, and Iwent a bit round each side, and a little way up the back. But I couldnot feel or hear anything. I tried to look at my tongue. I stuck it outas far as ever it would go, and I shut one eye, and tried to examine itwith the other. I could only see the tip, and the only thing that Icould gain from that was to feel more certain than before that I hadscarlet fever.

[Picture: Man with walking stick] I had walked into that reading-room ahappy, healthy man. I crawled out a decrepit wreck.

I went to my medical man. He is an old chum of mine, and feels my pulse,and looks at my tongue, and talks about the weather, all for nothing,when I fancy I'm ill; so I thought I would do him a good turn by going tohim now. "What a doctor wants," I said, "is practice. He shall have me.He will get more practice out of me than out of seventeen hundred of yourordinary, commonplace patients, with only one or two diseases each." SoI went straight up and saw him, and he said:

"Well, what's the matter with you?"

"I will not take up your time, dear boy, with telling you what is thematter with me. Life is brief, and you might pass away before I hadfinished. But I will tell you what is _not_ the matter with me. I havenot got housemaid's knee. Why I have not got housemaid's knee, I cannottell you; but the fact remains that I have not got it. Everything else,however, I _have_ got."

And I told him how I came to discover it all.

Then he opened me and looked down me, and clutched hold of my wrist, andthen he hit me over the chest when I wasn't expecting it--a cowardlything to do, I call it--and immediately afterwards butted me with theside of his head. After that, he sat down and wrote out a prescription,and folded it up and gave it me, and I put it in my pocket and went out.

I did not
open it. I took it to the nearest chemist's, and handed it in.The man read it, and then handed it back.

He said he didn't keep it.

"You are a chemist?"

"I am a chemist. If I was a co-operative stores and family hotelcombined, I might be able to oblige you. Being only a chemist hampersme."

I read the prescription. It ran:

And don't stuff up your head with things you don't understand."