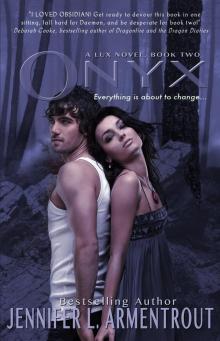 Ten seconds passed between when Daemon Black took his seat and when he poked me under my shoulder blade with his trusty pen. Ten whole seconds. Twisting around in my seat, I inhaled the unique outdoorsy scent that was all him.

Daemon pulled his hand back and tapped the blue cap of his pen on the corner of his lips. Lips I was well familiar with. “Good morning, Kitten. ”

I forced my gaze to his eyes. Bright green, like the stem of a freshly cut rose. “Good morning, Daemon. ”

Unruly dark hair fell over his forehead as he tilted his head. “Don’t forget we have plans tonight. ”

“Yeah, I know. Looking forward to it,” I said dryly.

As Daemon leaned forward, his dark sweater stretched over broad shoulders. He tipped his desk down. I heard the soft inhales from my friends Carissa and Lesa, felt the eyes of everyone in class watching us. One corner of his lips curved higher, as if he were secretly laughing.

The stretch of silence became too heavy. “What?”

“We need to work off your trace,” he said, low enough that only I could hear. Thank God. Trying to explain what a trace was to the general populace was not something I wanted to get into. Oh, you know, just alien residue that rubs off on humans and lights them up like a Christmas tree and becomes a homing signal to an evil alien race. Want some?

I picked up my pen and considered poking him with it. “Yeah, I figured as much. ”

“And I have this really fun idea of how we can do it. ”

I knew what his “fun idea” was. Me. Him. Making out. I smiled, and the green of his eyes heated.

“Liking the idea?” he murmured, and his gaze dropped to my lips.

An unhealthy amount of excitement had my entire body humming, and I reminded myself that his sudden turnaround had more to do with the effect of his bizarre alien mojo on me than it did with me as a person. Ever since Daemon healed me after the battle with the Arum, we were connected, and while that seemed to be enough for him to jump into a relationship, it wasn’t for me.

I wanted what my parents had. Undying love. Powerful. True. A whacked-out alien bond couldn’t do that for me.

“Not in this lifetime, buddy,” I said finally.

Rolling my eyes, I faced the front of the classroom. Daemon was a total babe, but he was stab-worthy, which, at times, zeroed out the babe part. Not always, though.

Our ancient trig teacher shuffled in, clutching a thick wad of papers while he waited for the tardy bell.

Daemon poked me with his pen. Again.

Squeezing my hands into fists, I debated ignoring him. I knew better. He’d just keep poking me. Turning around, I glared at him. “What, Daemon?”

He moved as fast as a cobra striking. With a grin that did funny things to my stomach, he glided his fingers along my cheek, plucking a tiny bit of fuzz out of my hair.

I stared at him.

I started to get all kinds of crazy ideas as his grin turned wicked, but I wasn’t playing his game anymore. I rolled my eyes and whipped back around. I would resist my hormones…and the way he got to me like no one else.

A slight tic of pain throbbed behind my left eye the rest of the morning, which I totally blamed on Daemon.

By lunch, I felt like someone had sucker punched me in the head. The steady noise of the cafeteria and the mix of disinfectant and burned food made me want to run from the room.

“You going to eat that?” Dee Black gestured at my untouched cottage cheese and pineapple.

Shaking my head, I pushed my tray over, and my stomach roiled as she dug in.

“You could eat the football team under the table. ” Lesa watched Dee with obvious envy sparkling in her dark eyes. I couldn’t blame her. I’d once seen Dee eat an entire package of Oreos in one sitting. “How do you do it?”

Dee shrugged dainty shoulders. “I guess I have a fast metabolism. ”

“What did you guys do this weekend?” Carissa asked, frowning as she wiped her glasses with the sleeve of her shirt. “I was filling out college applications. ”

“I was making out with Chad all weekend. ” Lesa grinned.

Both girls looked at Dee and me, waiting for us to share. I guessed the whole killing-a-psycho-alien-and-almost-dying thing probably wasn’t something to throw out there.

“We hung out and watched stupid movies,” Dee answered, giving me a slight smile as she tucked a shiny black curl behind her ear. “It was kind of boring. ”

I started to smile, but a warm tingle skated across the nape of my neck. The conversation around me faded and a few seconds later, Daemon dropped into the seat to my left. A plastic cup full of strawberry smoothie—my favorite—was set in front of me. I was more than a little shocked to be receiving any present from Daemon, much less one of my favorite treats. My fingers brushed his as I took the drink, and a jolt of electricity danced along my skin.

I yanked my hand back and took a small sip. Delish. Maybe it would make my tummy feel better. And maybe I could get used to this new gift-giving Daemon. Much better than the other douchebag version of him. “Thank you. ”

He smiled in response.

Daemon laughed. “I’m only at the service of one person in particular. ”

My cheeks flamed as I scooted my chair over. “You are not servicing me in any way. ”

He leaned in, closing my newly gained distance. “Not yet. ”

“Like that will ever happen,” Lesa retorted with an eye roll.

Daemon pulled a sub out of his bag. Only he could skip fourth period early to get lunch and not end up in detention. He was just so…special. Every girl at the table, besides his sister, was staring at him. Some of the guys were, too.

I wiped a hand over my damp, clammy forehead. “What plans?”

“Dee and I were talking in English about throwing a party the week after next,” Carissa jumped in. “Something—”

“Small,” Carissa corrected, eyes narrowing on her friend. “Just something with a few people. ”

Dee nodded, and her bright green eyes glimmered with excitement. “Our parents are going to be out of town Friday, so it works out perfectly. ”

I glanced at Daemon. He winked. My stupid heart skipped a beat.

“That’s so cool that your parents are letting you have a party at your house,” Carissa said. “Mine would stroke out if I even suggested something like that. ”

Dee shrugged one shoulder and looked away. “Our parents are pretty cool. ”

I forced my expression blank as a pang hit me in the chest. I truly believed Dee wanted her parents alive more than she wanted anything else in this world. And maybe even Daemon, too. Then he wouldn’t bear the weight of being responsible for his family.

During the time we’d spent together, I’d figured out most of his bad attitude was because of all the stress. And there was his twin brother’s death…

The party became the topic of discussion at the table for the rest of the lunch period. Which was kind of cool scheduling, since my
birthday was the following Saturday. But by Friday, the party would be all over the school. In a town where drinking in a cornfield was the height of excitement on a Friday night, no way was this going to stay a “small” party. Did Dee realize that?

“You okay with all of this?” I whispered to Daemon.

I knew he could if he wanted, which meant he didn’t have a problem with it.

Upset tummy or not, there was no way I could refuse that. “Sure. ”

His lips tipped up one side and he leaned toward me, his mouth inches from mine. “Come and get it. ”

Come and get…? Daemon placed half the cookie between those full, totally kissable lips.

My mouth dropped open. Several of the girls at the table made sounds that had me wondering if they were turning into puddles under the table, but I couldn’t bring myself to check out what they really were doing.

Heat swept over my cheeks. I could feel the eyes of everyone else, and Daemon…dear God, Daemon arched his brows, daring me.

Mortified, I wanted to crawl in a hole. What did he think I was going to do? Take the cookie from his mouth like something straight out of an R-rated version of Lady and the Tramp? Heck, I kind of wanted to, and I wasn’t sure what that said about me.

Daemon reached up and took the cookie. There was a gleam to his eyes, as if he’d just won some battle. “Time’s up, Kitten. ”

I stared at him.

Breaking the cookie in two, he handed me the larger piece. I snatched it away, half tempted to throw it back in his face, but it was…it was chocolate chip. So I ate it and loved it.

Taking another sip of my smoothie, I felt unease skitter along my spine like I was being watched. Glancing around the cafeteria, I expected to find Daemon’s alien ex-girlfriend giving me her trademark bitch look, but Ash Thompson was chatting with another boy. Huh. Was he a Luxen? There weren’t many their age, but I doubted Ash in all her supremeness would be smiling at a human boy. My gaze moved away from their table, scanning the rest of the cafeteria.

Mr. Garrison stood by the double doors to the library, but he was staring at a table full of jocks who were making some intricate designs with their mashed potatoes. No one else even remotely looked in our direction.

I shook my head, feeling foolish for being weirded out over nothing. It wasn’t like an Arum was going to bum-rush the high school cafeteria. Maybe I was coming down with something. My hands shook a little as I reached for the chain around my neck. The obsidian was cool against my skin, comforting—a herald of safety. So I needed to stop freaking out. Maybe that was why I was lightheaded and dizzy.

It surely had nothing to do with the boy sitting beside me.

There were several packages waiting for me at the post office and I only barely squealed. They were advanced reader copies from other bloggers passing them along for review. And I was, like, whatever. Sure evidence I was coming down with mad cow disease.

The trip home was torturous. My hands felt weak. My thoughts were scattered. Gathering my mail close to my chest, I ignored the way the skin on the back of my neck tingled as I climbed the porch steps. And I also ignored six feet and then some of boy leaning against the railing.

“You didn’t come straight home after school. ” Annoyance colored his tone. Like he was my own screwed-up, super-hot version of the Secret Service and I’d managed to evade him.