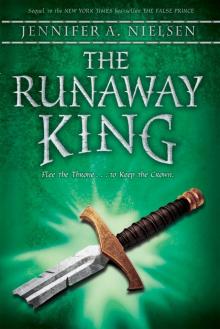 I had arrived early for my own assassination.

It was the evening of my family’s funeral, and I should have already been at the chapel. But the thought of mourning alongside the arrogant coxcombs who would also be there sickened me. If I were anyone else, this would have been a private matter.

For a month, I had been the king of Carthya, a role for which I had never been prepared and which most Carthyans believed was entirely unsuitable for me. Even if I wanted to disagree, I had no credibility for such an argument. During these first weeks of my reign, courting favorable public opinion had hardly been my top priority. Instead, I had a much bigger task: convincing my regents to help prepare for a war I felt sure was coming.

The biggest threat came from Avenia, to the west. Its leader, King Vargan, had come to the funeral unexpectedly. Maybe his claims of only wanting to pay his respects sounded sincere, but I was not deceived: He’d grieve more for the loss of his after-supper cake than for my parents and my brother. No, Vargan had come to learn my weaknesses and assess my strengths. He had come to test me.

Before engaging in any confrontation with Vargan, I had needed time to think, to be sure of myself. So rather than enter the funeral, I had told them to start without me, then escaped here, to the royal gardens.

This had become my favorite place on the frequent occasions when I needed to get away from everyone. The bright springtime flowers were surrounded by tall, dense hedges and lined with plants of every variety. Majestic trees kept the view from above concealed through most seasons of the year, and the grass was soft enough to make bare feet nearly mandatory. In the center of it all was a marble fountain with a statue at the top depicting King Artolius I, a grandfather from generations ago who had won independence for Carthya. My name, Jaron Artolius Eckbert III, partially came from him.

In hindsight, these gardens were the perfect place for a nice and quiet attempted murder.

I didn’t even consider something as passive as sitting tonight. Overwhelmed with conflicted feelings surrounding the funeral, and with Vargan’s late arrival, my body was tense and my emotions raw. I needed to climb, to work off some energy.

I quickly scaled the first level of the castle, using the unevenly cut rocks as grips for my fingers and feet. The lowest ledge at this part of the wall was broad and swallowed up in ivy, but I rather liked that. I could fold myself into the dense leaves and glance out at the gardens with the feeling that I was a part of it all, rather than a simple observer.

After less than a minute, the gardener’s door opened below me. That was odd. It was far too late for a caretaker to be out here, and this ground was forbidden to anyone else unless I invited them in. I crept to the edge of the wall and saw a figure dressed in black cautiously making his way forward. This was no servant, who would have announced himself properly, if he even dared enter at all. The figure made a quick survey of the area, then withdrew a long knife and took refuge in some bushes directly beneath me.

I shook my head, more amused than angry. Everyone would have expected me to come here for reflection tonight, but they wouldn’t have planned for me until after the funeral.

The assassin thought he’d have surprise on his side. But now the advantage was mine.

Silently, I unlatched my cloak so it wouldn’t interfere. Then I withdrew my own knife, gripped it tightly in my left hand as I crouched at the tip of the ledge, and leapt directly onto the man’s back.

As I jumped, he moved, so I only clipped his shoulder as we fell in opposite directions. I was up first and took a swipe at his leg with my knife, but it didn’t cut nearly as deep as I’d hoped. He kicked me to the ground, then knelt across my forearm and wrenched the knife from my grasp, tossing it far from us.

The man caught me on the jaw with a powerful punch that knocked my head against the ground. I was slow to get up, but when he reached for me, I kicked him as hard as I could. He stumbled back and crashed into a tall vase, then fell to the ground, not moving.

I rolled to face the castle wall and massaged my jaw. The fact that my hand was already on my face probably saved my life. Because a second attacker came out of nowhere, holding a rope that he wrapped around my neck. He pulled it tight, pinching off my air. But with my hand trapped inside the rope, at least I could give myself some chance to breathe.

I punched an elbow backward, connecting with the chest of this new attacker. He grunted, but it took three hits before he was forced to readjust his position and loosen the rope. When he shifted, I rounded on him and reared back an arm for a swing.

Then I froze. In the instant I locked eyes with the intruder, time stopped.

It was Roden. Once my friend. Then my enemy. Now my assassin.

I t had only been a matter of weeks since I’d seen Roden, yet it seemed like months. In our last encounter, he had tried to kill me as a final attempt to get the throne for himself. But I sensed his reasons for being here tonight were even darker.

Together we’d been trained by a nobleman named Bevin Conner, who’d snatched us and two other boys, Tobias and Latamer, from Carthyan orphanages with the intention of passing one of us off as Jaron, the lost prince of Carthya. Jaron’s parents had attempted to send him to a boarding school where he might learn some much-needed manners, but after he’d escaped the ship bound for Bymar, pirates had attacked with the intention of bringing about Jaron’s demise. Nobody — not Conner, not Roden, not the other boys — knew that I was, in fact, Jaron in disguise. Roden still didn’t know this. As far as he knew, I was an orphan named Sage, no more worthy of the throne than he was.

It was a good thing Conner hadn’t attempted to pass him off as Prince Jaron, because in this short time he’d changed enough to look even less like me. Roden’s brown hair had lightened and his skin was tanner than before. He looked older and certainly acted that way. When I’d last seen him, he had been upset, but it was nothing compared to his expression now. This went far beyond anger.

Dropping the rope, Roden got to his feet and drew out a sword. He held it like an extension of his arm, as if he’d been born with that very weapon in his hand. My knife was somewhere behind him, hidden in shadow. The odds weren’t exactly in my favor.

“I was with you at Farthenwood. You can’t lie to me about who you really are. ”

Which was exactly my point, if he thought about it. Speaking as calmly as I could, I said, “Lower your sword, and I’ll explain everything. ” I had located the place where my knife lay, but it was too far to be retrieved before he could use that sword. So at this point, I much preferred to talk with him.

“I’m not here for your explanations,” he growled.

His sword remained ready, but I slowly stood, keeping my hands visible. “You’ve come to kill me, then?”

“This fraud of yours is over. It’s time you learn who is really in command. ”

He shook his head. “I’m with powerful people now. And we’re coming for you. I’d rather kill you here, but the pirate king has some business with you first. ”

Although I appreciated the delay in my death, somehow I doubted any meeting with the pirate king was good news. With a smirk, I said, “So you joined up with the pirates? I couldn’t imagine anyone but the ladies’ knitting club accepting you. ”