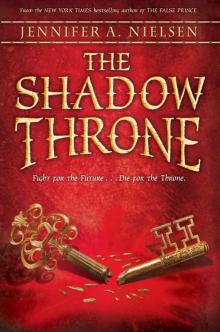 THREE WEEKS BEFORE THE WAR

In my life, I’d had my share of fights, sometimes with fists, sometimes with knives, occasionally with a sword. I’d faced opponents twice my size, twice as mean, and, as a general rule, uglier than I ever hoped to be. But nothing had ever topped the ferocity of the argument now going on in the center of my great hall.

“Bringing you to this castle was the greatest mistake of my life!” I yelled. My fists were curled so tightly into balls that it felt as if my nails might pierce my skin. “And I would order your hanging right now, except that your neck isn’t worth the price of the rope!”

The target of my threat was none other than Roden. In the few short months we had known each other, he and I had been through a lot together, including him trying to kill me twice — three times if we counted the broken leg — and me risking my life to convince him to come back to Carthya as the captain of my guard. Obviously, we’d had our share of disagreements. But none were half so loud as this current argument.

“I would gladly die,” Roden yelled back, “if the order came from less of a fool for a king!”

Gasps echoed around the hall at the insult. Words like that easily justified my ordering Roden’s arrest, but I didn’t. There were too many things that still needed to be said, or yelled, if necessary.

“Do you think your position as captain makes us equals?” I asked. “You may command our armies but you do not command me! And I will lead them my own way!”

Roden pointed down at my right leg, which the surgeon had ordered to remain tightly wrapped for at least another few weeks. “You can’t lead anything on a broken leg. ”

“Then maybe you shouldn’t have broken it!” I said.

“I should’ve broken your jaw instead,” Roden countered. “Then I wouldn’t have to listen to your ridiculous orders!” There were more gasps from the regents in the room and the passing servants, and he appealed to them to continue the argument. “Our soldiers are scattered throughout this country. If Avenia invades from the south, they will crush us. ”

My high chamberlain, Lord Kerwyn, hurried toward us and in hushed tones said, “My king, could we continue this conversation in the privacy of the throne room? Everyone is listening. ”

Yes, they were. Not only those who had been in the room when it started, but many others who had heard the yelling and come to see the commotion for themselves. Kerwyn may have felt embarrassed for me, but I had no intention of making this private.

I stepped back from Kerwyn and said, “There’s nothing to continue, Lord Kerwyn. The captain of my guard thinks I should have no say in the way my armies are trained. ”

Kerwyn looked at Roden, clearly appalled by his disrespect, but Roden only tightened the muscles on his face.

“We all bow to the king’s will, Captain. So must you. ” Kerwyn’s scolding tone was so sharp, Roden actually flinched.

But before Roden could speak, I said, “No, Kerwyn. I won’t have him bow to me and secretly insist he’s in the right. ” Then to Roden, I said, “If you think you can train our men better, then I dare you to do so. Take whomever you wish, train them in whatever way you want. Then we’ll compare our two groups. You’ll see I’m right. ”

“Never!” Roden yelled. “I’ll begin training in the courtyard at once. ”

“Not in my courtyard, or even in my city!” I retorted. “If you do this, you will leave Drylliad. Leave with all your arrogance and high hopes, and come back when you finally understand your place. ”

Kerwyn put his hand on my arm. “Jaron, I beg you to think of what you’re saying. You two must make peace. You are still injured, and if war is truly coming, then we need your captain here. ”

I only brushed off his hand and leaned in to Roden, then hissed, “Get out. ”

Roden stared back with an anger so fierce, it worried me. Then he announced that within the hour, he would leave, taking forty of the men who had been assigned to him. Despite the things we had said to each other, I hoped he would go with only the best of luck.

I watched him leave, and then stared around at all those who had gathered to watch our exhibition. They were trusted members of the court, servants, and citizens of my country. And quite possibly, at least one of them was here as a spy for our enemies, who would now report that the armies of Carthya were broken and divided.

Ever since the day I returned from the pirates, Carthya had begun making preparations such as had not been seen in a generation. We were storing up food, forging weapons, and building our defenses, but for all that, the thing I needed most would be the hardest to get: time.

As it turned out, we had even less time than I’d expected. Only three short weeks later, the war would begin. . . .

I received news of the attack on Libeth at sunset while standing on a wide grassy field near the castle walls. Facing me were Kerwyn, Amarinda, and Mott, but I barely saw them.

Libeth was a peaceful town, long insulated from the troubles that had plagued other settlements near Avenia. Its citizens were the families of farmers and traders, and the raid certainly would’ve come without enough warning for even the strongest to form an adequate defense. I couldn’t begin to comprehend the horror of what they’d faced in the night, the destruction left to them now. The thought of it sucked the breath from me.

And, there was more. Imogen had been taken during the attack.

Everyone seemed to be talking at once, none of them realizing that my head was swarming with questions that no one here could answer. Did we know if she was still alive? If so, had she been harmed? What would they do to her if they thought it could hurt me? For that was surely the reason King Vargan had sent his armies after her.

If Imogen was still alive, then Avenia would seek our total surrender in exchange for her return. They would know I couldn’t grant that, so I would have to attempt a rescue. She was nothing but bait to them, and I, their prize.

Beyond that, the war I’d been anticipating for several months had finally arrived. But everything I had so carefully planned seemed irrelevant now. So little of this news was what I’d expected. And Kerwyn was steadily making it worse.

“We’ve also just received word that Gelyn and Mendenwal are advancing from the north and east,” he said. “This was a coordinated attack and we are surrounded. Jaron, the war has begun. ”

They all returned to talking again, but I couldn’t hear any of it, or at least, I couldn’t separate one word from another. It was impossible to comprehend what they wanted from me.

I stared at her without seeing and began back-stepping. “Forgive me,” I mumbled. Then I turned and ran, led blindly by some force inside me that had to get away. I needed a place to think, to understand. Somewhere to breathe.

I sprinted toward the castle, only vaguely aware of the sharp pain that still came to my right leg whenever I worked it too hard. The broken bone from Roden remained soft, and yet I pushed myself faster. If anything, I wanted to feel the pain, to give my panicked emotions somewhere to go.

Servants and soldiers were blurs beside me as I ran. I wasn’t sure where I was going, or what I hoped to find there. Only one thought remained locked in my mind, that Imogen had been taken. And they would demand everything for her return.

The Shadow Throne by Jennifer A. Nielsen / Young Adult / Fantasy have rating 5.3 out of 5 / Based on53 votes

Mark of the Thief
The Ascendance Trilogy
The Underworld Chronicles