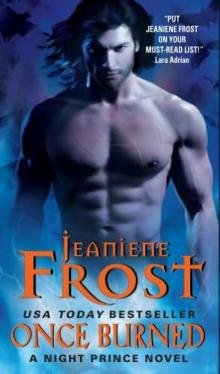 After a tragic accident scarred her body and destroyed her dreams, Leila never imagined that the worst was still to come: terrifying powers that let her channel electricity and learn a person's darkest secrets through a single touch. Leila is doomed to a life of solitude...until creatures of the night kidnap her, forcing her to reach out with a telepathic distress call to the world's most infamous vampire...

Vlad Tepesh inspired the greatest vampire legend of all—but whatever you do, don't call him Dracula. Vlad's ability to control fire makes him one of the most feared vampires in existence, but his enemies have found a new weapon against him—a beautiful mortal with powers to match his own. When Vlad and Leila meet, however, passion ignites between them, threatening to consume them both. It will take everything that they are to stop an enemy intent on bringing them down in flames.

(The first book in the Night Prince series)

A novel by Jeaniene Frost

To JBA, for everything.

I parked my bike in front of the restaurant, wiping the perspiration from my upper lip. It was unseasonably warm this January, but sweating during a Florida winter was better than freezing in a Northern one. I twisted my hair into a knot, my neck cooler once the long black swath was off it. With a final swipe at my forehead, I entered the restaurant, ignoring the tables in favor of the patrons seated at the bar.

It only took a glance to see that most of them were average height, with a few extremely tall exceptions. Damn. If Marty wasn’t here, then I had to ride to his next favorite hangout, and it looked like it was going to rain. I threaded through the tables, making sure to keep my right hand affixed to my thigh so it wouldn’t accidentally brush anyone. It was that or wear the bulky electrical glove that inspired questions from nosy strangers. When I got to the bar, I smiled at the pierced, tattooed man who scooted enough to give me space at the countertop.

Dean shook his head, rustling the chains that led from his nostrils to his ears. “Not yet, but I just got here.”

“Raquel?” I called out. The bartender turned around, revealing a beautiful but bearded face that tourists surreptitiously or openly stared at.

“The usual, Frankie?” she asked, reaching for a wineglass.

That wasn’t my real name, but it was what I went by nowadays. “Not this time. I’m looking for Marty.”

Raquel didn’t ask why I’d come in person instead of calling to ask that same question. Even though all the carnies that wintered in Gibsonton pretended they didn’t know about my condition, none of them except Marty ever attempted to touch me, and no matter the weather, they didn’t offer me a ride when they saw me on my bicycle.

I sighed. “If he comes in, tell him I’m looking for him?” We were supposed to start practice two hours ago. The off season turned Marty from a rigidly disciplined partner into a frequent slacker. If I didn’t find him soon, he’d pass the point of being reasoned with and would stay out all night drinking and telling stories about the old carnival glory days.

I started to walk away, but Dean tapped his beer with his fork, directing my attention back to him with the sound. “Want me to call the Tropicana and ask if Marty’s there?”

He had correctly guessed the next place I was headed to, but then again, Dean had known Marty longer than I had.

“It’s only a mile and I need to keep my legs in shape.”

“They look fine to me,” Dean said huskily, his gaze lingering on the limbs in question before moving over the rest of my body. Due to the heat, I only wore shorts and a tank top, so his view was pretty unrestricted. Then Dean shook his head as if to remind himself why checking me out was a bad idea. “See you around, Frankie,” he finished in a brisker tone.

My chest tightened with an ache that was as familiar as it was useless. Yeah, Dean knew why fantasizing about my legs—or any other part of me—was pointless, and I’d long ago accepted that there were some things I’d never have. Yet in a flash of weakness, I found myself looking at a couple who were seated at a nearby table. Their fingers were interlaced as they whispered to each other. That simple touch was something they hardly seemed aware of, but it caught my attention like a spotlight beamed onto it, turning that ache in my chest into something closer to a burn.

The couple glanced at me, perhaps sensing my stare, but then their gaze quickly passed me by. Either they hadn’t noticed the scar that ran from my temple to my right hand, or they didn’t find it as interesting as the lizard-scale tattoos covering Dean’s entire body, Raquel’s beard, J.D.’s eight-foot height, or Katie’s fourteen-inch waist that looked even tinier compared to her ample hips and double-D chest. It was still early, too. Most of Showtown USA’s regulars didn’t get here until after nine.

The couple continued to stare at the group by the bar without any attempt at subtlety, and the annoyance I felt over my friends being gawked at shook me from my brief melancholy. Some tourists came to Gibsonton to marvel at the carnival remains decorating many streets, or to see the occasional trained bear, elephant, or other exotic animal on someone’s lawn, but most of them came to stare at the “freaks.” The locals were immune to it, or played up their peculiarities for tips, but I still couldn’t shake my anger over the rudeness so often displayed. Different didn’t equal subhuman, yet that’s exactly how many of Gibsonton’s residents were treated by passersby.

Still, it wasn’t my place to lecture people on their lack of manners, not to mention Raquel wouldn’t take kindly to me chastising her customers. With my lips compressed together, I headed to the door, startled when it flung open as I reached for it. I jumped back in time to avoid being plowed over by a man who strode through as though he owned the place, but I wasn’t fast enough to prevent his hand from grazing my arm.

“Ouch”! he snapped at the contact, giving me an accusing glance. “What the hell?”

He didn’t know it, but he was lucky. If I hadn’t learned to harness some of the currents in me, or released the worst of them into lightning rods only an hour before, his experience would’ve been much worse.

“Static electricity,” I lied. “It’s bad around this area.”

His expression said he didn’t believe me, but I had nothing in my hands, and my outfit wouldn’t conceal much, either. After another glare, he turned his back on me.

“Which exit do I take to get to Tampa?” he called out to the bar at large. “My damn nav system isn’t working here.”

That wasn’t unusual around these parts and I knew the answer, but I stayed silent, not wanting to risk another inadvertent touch by talking to him again.

I went out the bar door—and a harried-looking blonde ran right into me. She let out a yelp that I mentally echoed out of sheer frustration. After months of a spotless record, now I’d zapped two people in less than five minutes. At least Rude Dude had taken some of the extra voltage out of me so hers probably did feel like static electricity instead of mild electrocution.

“It’s my fault.” She laughed, patting me in an apologetic way. “I wasn’t looking—”

I didn’t hear the rest of what she said. Images seared across my mind in varying shades of black, white, and gray.

I was in bed with my lover, our heavy breathing the only sound in the room. Afterward, I whispered that I was going to tell my husband I was leaving him the following weekend.