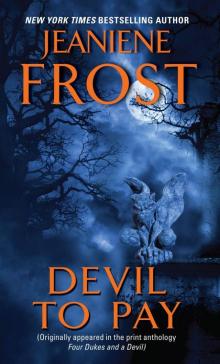 "I don't want any trouble," he said, realizing the stupidity of those words. It was after midnight, he was in a derelict alley with three thousand dollars' worth of crack cocaine on him - and that was the good news.

"You lost?" one of the men asked, coming closer.

The other three from the opposite end of the alley drew closer, too. There was no way out. Blake could feel him rouse, sensing the danger. He didn't have much time.

"You need to leave," Blake said, fear setting in as he felt that familiar buzzing start in his head.

Another of them laughed. "Give us those bags you just bought, bitch, and we'll leave. " For a split second, Blake hesitated. He'd bought the crack with the last of his money, and he needed it.

Not because he was an addict; Blake had never touched drugs in his life. No, he'd intended his first use to be the last thing he ever did.

But that buzzing in his head was getting louder. No. Not yet. Not until I can get away from these people. . .

"Take it and leave me alone," Blake ground out, yanking the bags from his coat.

One of them took the bags, then shoved Blake. He staggered and fell, tasting blood as his mouth banged against a fire escape.

That rustling in his head got louder. It was too late.

Confusion was stamped on the faces peering at him. "He crazy," someone muttered.

Blake glanced around. No one had a gun or knife drawn. This was a dark, gang-infested alley in Columbia Heights, DC. Couldn't one of them stab him or shoot him?

Blake began to yell the most incendiary thing he could think of. "What're you standing there looking at? You recognize me from last night, when I was fucking your mother?"

They surrounded Blake, kicking him. Blake twisted, making no move to defend himself. Instead, he arched toward the blows. Fear rose, but not of dying.

Break my neck, Blake thought savagely. Or take a pipe and smash my head open!

They didn't, though one of them did smash his foot into Blake's face, breaking his nose. Blake coughed up blood even as his whole body clenched. He was almost here. Blake tried to force him back, but he was too strong.

"What's the matter with you?" Blake roared with his last ounce of strength. "Kill me!" A hard kick snapped Blake's head back before his world went white. For a brief, blissful moment, Blake thought he'd finally gotten to die, and he felt overwhelming relief .

But when Blake came back to reality, there was blood everywhere. A few people were gathered at the end of the alley. Blake didn't know how long they'd been standing there, but their eyes were wild, faces chalky with shock. They'd probably never seen anything like this, even there, in one of the worst parts of the District.

Blake let out a howl of despair as he stared at the thick red blood coating his hands and the bodies around him. Damn you, he silently screamed at the monster inside him. Damn you to hell!

But that was the problem. Hell was where the devil inside Blake came from.

Elise's living room began to shake, but she barely noticed it. She was so used to the vibrations every time a train zoomed by that it was more attention-grabbing when there were extended periods of calm.

The fifties song "Jump, Jive and Wail" played on her iPod, a recent gift from her sire, Mencheres. Elise would have continued to listen to music on her records, no matter how many times the trains made the needle jump and scratch them, but one of Mencheres's most common lectures was to embrace the changing world. Some vampires, as they got older, withdrew from society and became hermitlike, clinging to the things from their original time period. Eventually those vampires could become so disconnected that hatred for the ever-advancing world was a side effect.

Elise was already a loner. She lived under a metro tunnel, didn't socialize much with other vampires or humans, and far preferred big-band music to the noise on the radio these days. All things considered, Mencheres had reason to be concerned about her sliding down that hermit road, but she didn't hate the modern world or its changes. She was just happier by herself.

More shaking of the walls announced the arrival of the six-fifteen train. Elise put her book down with a sigh. Time to shower and eat, activities that required her to leave her comfortable home.

She put on a tank top and pants, adding a jacket over that in spite of the warm temperature outside.

Fewer clothes meant more attention, and Elise wanted to talk to as few people as possible. She pulled her hair into a ponytail, put on a baseball cap, and opened the creaking metal door.

A blast of smells hit her as she went into the tunnels that connected the defunct section where she lived to the operating metro tunnels above. At least she didn't need to breathe; the residual odors from the indigent who used these places as a temporary residence and bathroom, combined with the stench of rotted food, dead rats, or other animals - were bad enough.

The few homeless people who were in the tunnels at that hour didn't look at Elise as she walked by.

Every so often, a newcomer would approach her. One who hadn't been warned about her by the others, or who hadn't listened. Elise didn't feed from any curious newcomers - smelling them was bad enough

- she just slammed them with the power in her gaze and compelled them to leave her alone. If one was stupid enough to attack her, well. . . that person didn't live long enough to regret it.

Tonight it was only the regulars, so Elise passed by without incident. She walked out of the tunnel and through the station platform, keeping her head down, not needing to look to know the way. It was so familiar to her, she could have made the trip in her sleep.

Once free of the closeted atmosphere, Elise's steps became longer and more relaxed. She even hummed as she made her way down Connecticut Avenue to the fitness club. The girl behind the counter barely glanced at Elise when she came inside, but a nod indicated that Elise didn't need to show her membership card. She was such a regular sight there, few employees asked to see it anymore.

Elise went upstairs to the multitude of exercise machines. Her size would never be any different than it was now, but the club employees asked too many questions if she didn't at least pretend to exercise.

After twenty minutes on the treadmill, Elise went to the locker room. She stripped and showered, then brushed her teeth with the toothbrush she kept with a few other items in a locker. After a quick blow-dry of her hair, she was ready to move on to the next item in her routine.

Some nights, when Elise was lucky, she fed from whoever was alone in the locker room. It only took a flash of her gaze for the woman to forget Elise had just cornered her and drunk her blood. But most evenings were busy at the gym. It was easier for Elise to walk the city, and find someone alone - or accompanied by fewer witnesses to brainwash.

Tonight, Elise found her meal along 7th Street, a young man who wandered away from his friends in the Sculpture Garden. She drank from him, closed the holes with a drop of her own blood, and sent him back to his companions inside of two minutes. He'd be sleepier from the pint she drained from him but otherwise unharmed. It was only in the movies that vampires needed to kill to feed, along with other falsehoods like wooden stakes and sunlight being harmful to them.

As a nod to her sire's admonishments to get out more, Elise then sat and read at a local coffee shop instead of just buying more books and going straight home. She even exchanged a comment about the weather with someone who sat across from her. There. No one could say she wasn't interacting with humans except to bite
them.

When the coffee shop closed, however, Elise gratefully headed home. She walked through the Capital Lawn, taking comfort in the familiarity of the gleaming white buildings and older structures. Then she followed the line of the tracks through the city until she reached the station where the tunnels connected.

She'd made it past the few remaining travelers and into the inoperative tunnels when she smelled something unmistakable. Blood, seasoned with the distinctive tang of death. Elise quickened her pace, her sneakers making hardly any sound at all. There were very few homeless left in the tunnels at this hour, though their wariness was unfounded since Elise never killed one who hadn't attacked her first.

Still, those who guessed what she was didn't linger long after dark. Silly humans. Just because she preferred to go out at night didn't mean she was trapped inside during the day.

The smell became stronger the deeper Elise ventured inside the tunnel. Even over the sound of an approaching train, Elise could hear a heartbeat just ahead. Whoever it was had slunk back into one of the old maintenance alcoves but would soon find out that a sneak attack was a bad idea.

When the man stepped out onto the track with his back to her, she paused in surprise. Whoever this was didn't seem even to know she was there, let alone be lying in wait. That stench of blood and death came off the stranger, but even stronger was despair. He balanced on the edge of the track as if in indecision. The train would be here any second. The fool wouldn't try to cross the tracks now, would he?

The man clutched his head, muttering, "No, not yet!" several times. The tunnel vibrated as the train approached. With growing awareness, Elise saw that the man was going to jump right in front of it.

Even as she charged forward to snatch him back, something happened. The despairing scent pouring off him changed to the choking stench of sulfur. His mouth opened in an impossibly wide snarl as he whirled, gripping Elise with more strength than any human should have. Pinpoints of red shone in his eyes, like sparks before a fire, and before her gaze, his skin seemed to turn to a waxy ashen shade.

"Vampire, " he hissed, reaching for her throat.

Elise didn't pause to wonder what was going on. She punched him in the head, watching in relief as he collapsed to the tunnel floor.