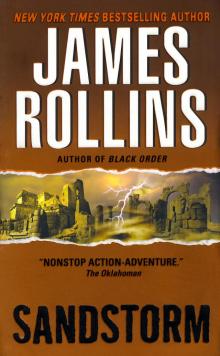 H ARRY MASTERSON would be dead in thirteen minutes.

If he had known this, he would’ve smoked his last cigarette down to the filter. Instead he stamped out the fag after only three drags and waved the cloud from around his face. If he was caught smoking outside the guards’ break room, he would be shit-canned by that bastard Fleming, head of museum security. Harry was already on probation for coming in two hours late for his shift last week.

Harry swore under his breath and pocketed the stubbed cigarette. He’d finish it at his next break…that is, if they got a break this night.

Thunder echoed through the masonry walls. The winter storm had struck just after midnight, opening with a riotous volley of hail, followed by a deluge that threatened to wash London into the Thames. Lightning danced across the skies in forked displays from one horizon to another. According to the weatherman on the Beeb, it was one of the fiercest electrical storms in over a decade. Half the city had been blacked out, overwhelmed by a spectacular lightning barrage.

And as fortune would have it for Harry, it was his half of the city that went dark, including the British Museum on Great Russell Street. Though they had backup generators, the entire security team had been summoned for additional protection of the museum’s property. They would be arriving in the next half hour. But Harry, assigned to the night shift, was already on duty when the regular lights went out. And though the video surveillance cameras were still operational on the emergency grid, he and the shift were ordered by Fleming to proceed with an immediate security sweep of the museum’s two and a half miles of halls.

That meant splitting up.

Harry picked up his electric torch and aimed it down the hall. He hated doing rounds at night, when the museum was lost in gloom. The only illumination came from the streetlamps outside the windows. But now, with the blackout, even those lamps had been extinguished. The museum had darkened to macabre shadows broken by pools of crimson from the low-voltage security lamps.

Harry had needed a few hits of nicotine to steel his nerve, but he could put off his duty no longer. Being the low man on the night shift’s pecking order, he had been assigned to run the halls of the north wing, the farthest point from their underground security nest. But that didn’t mean he couldn’t take a shortcut. Turning his back on the long hall ahead, he crossed to the door leading into the Queen Elizabeth II Great Court.

This central two-acre court was surrounded by the four wings of the British Museum. At its heart rose the great copper-domed Round Reading Room, one of the world’s finest libraries. Overhead, the entire two-acre courtyard had been enclosed by a gigantic Foster and Partners–designed geodesic roof, creating Europe’s largest covered square.

Using his passkey, Harry ducked into the cavernous space. Like the museum proper, the court was lost to darkness. Rain pattered against the glass roof far overhead. Still, Harry’s footsteps echoed across the open space. Another lance of lightning shattered across the sky. The roof, divided into a thousand triangular panes, lit up for a blinding moment. Then darkness drowned back over the museum, drumming down with the rain.

Thunder followed, felt deep in the chest. The roof rattled, too. Harry ducked a bit, fearing the entire structure would come crashing down.

With his electric torch pointed forward, he crossed the court, heading for the north wing. He rounded past the central Reading Room. Lightning flashed again, brightening the place for a handful of heartbeats. Giant statues, lost to the darkness, appeared as if from nowhere. The Lion of Cnidos reared beside the massive head of an Easter Island statue. Then darkness swallowed the guardians away as the lightning died out.

Harry felt a chill and pebbling of gooseflesh.

His pace hurried. He swore under his breath with each step, “Bleeding buggered pieces of crap…” His litany helped calm him.

He reached the doors to the north wing and ducked inside, greeted by the familiar mix of mustiness and ammonia. He was grateful to have solid walls around him again. He played his torch down the long hall. Nothing seemed amiss, but he was required to check each of the wing’s galleries. He did a fast calculation. If he hurried, he could complete his circuit with enough time for another fast smoke. With the promise of a nicotine fix luring him, he set off down the hall, the beam of his torch preceding him.

The north wing had become host to the museum’s anniversary show-case, an ethnographical collection portraying a complete picture of human achievement down the ages, spanning all cultures. Like the Egyptian gallery with its mummies and sarcophagi. He continued hurriedly, ticking off the various cultural galleries: Celtic, Byzantine, Russian, Chinese. Each suite of rooms was locked down by a security gate. With the loss of power, the gates had dropped automatically.

At last, the hall’s end came into sight.

Most of the galleries’ collections were only temporarily housed here, transferred from the Museum of Mankind for the anniversary celebration. But the end gallery had always been here, for as far back as Harry could recall. It housed the museum’s Arabian display, a priceless collection of antiquity from across the Arabian Peninsula. The gallery had been commissioned and paid for by one family, a family grown rich by its oil ventures in that region. The donations to keep such a gallery in permanent residence at the British Museum was said to top five million pounds per annum.

One had to respect that sort of dedication.

With a snort at such a foolish waste of good money, Harry splayed his torch’s spot across the engraved brass plate above the doorway: THE KENSINGTON GALLERY. Also known as “The Bitch’s Attic. ”

While Harry had never encountered Lady Kensington, from the talk among the employees, it was clear that any slight to her gallery—dust on a cabinet, a display card with a smudge on it, a piece of antiquity not properly positioned—was met with the severest reprimand. The gallery was her personal pet project, and none withstood her wrath. Jobs were lost in her wake, claiming even a former director.

It was this concern that kept Harry a few moments longer at his post outside the gallery’s security gate. He swept his torch around the entrance room with more than casual thoroughness. Yet again, all was in order.

As he turned away, withdrawing his torch, movement drew his eye.

He froze, torch pointing at the floor.

Deep within the Kensington Gallery, in one of the farther rooms, a bluish glow wandered slowly, shifting shadows with its passage.

Another torch…someone was in the gallery…

Harry felt his heart pounding in his throat. A breakin. He fell against the neighboring wall. His fingers scrambled for his radio. Through the walls, thunder reverberated, sonorous and deep.

He thumbed his radio. “I have a possible intruder here in the north wing. Please advise. ”

He waited for his shift leader to respond. Gene Johnson might be a wanker, but he was also a former RAF officer. He knew his shit.

The man’s voice answered his call, but dropouts ate most of his words, interference from the electrical storm. “…possible…are you sure?…hold until…are the gates secure?”

Harry stared back at the lowered security gates. Of course he should have checked to see if they had been breeched. Each gallery had only one entrance into the hall. The only other way into the sealed rooms was through one of the high windows, but they were wired against breakage or intrusion. And though the storm had knocked out main power, the backup generators kept the security grid online. No
alarms had been raised at central command.

Harry imagined Johnson was already switching cameras, running through this wing, bearing down on the Kensington Gallery. He risked a glance into the five-room suite. The glow persisted deep in the gallery. Its passage seemed aimless, casual, not the determined sweep of a thief. He did a quick check on the security gate. Its electronic lock glowed green. It had not been breached.

He stared back at the glow. Maybe it was just the passing of some car’s headlights through the gallery’s windows.

Johnson’s voice over his radio, cutting in and out, startled him. “Not picking up anything on the vid…Camera five is out. Stay put…others on the way. ” Any remaining words disappeared into the ether, fritzed by the electrical storm.

Harry stood by the gate. Other guards were coming as backup. What if it wasn’t an intruder? What if it was just the sweep of headlights? He was already on thin ice with Fleming. All he needed was to be made a fool of.

He took a chance and raised his torch. “You there!” he yelled. He thought to sound commanding, but it came out more of a shrill whine.

Still, there was no change in the wandering pattern of the light. It seemed to be heading even deeper into the gallery—not in panicked retreat, just a meandering slow pace. No thief could have that much ice in his veins.

Harry crossed to the gate’s electronic lock and used his passkey to open it. The magnetic seals released. He pulled the gate high enough to crawl under and entered the first room. Straightening, he lifted his torch again. He refused to be embarrassed by his momentary panic. He should’ve investigated further before raising the alarm.

But the damage was done. The best he could do was save a bit of face by clearing up the mystery himself.

He called out again, just in case. “Security! Don’t move!”

His shout had no effect. The glow continued its steady but meandering pace into the gallery.

He glanced back out the gate to the hall. The others would be here in under a minute. “Bugger it,” he mumbled under his breath. He hurried into the gallery, pursuing the light, determined to root out its cause before the others arrived.

With hardly a glance, he passed treasures of timeless significance and priceless value: glass cabinets displaying clay tablets from Assyrian king Ashurbanipal; hulking statues of sandstone dating back to pre–Persian times; swords and weapons from every age; Phoenician ivories depicting ancient kings and queens; even a first printing of The Arabian Nights, under its original title, The Oriental Moralist.

Sandstorm by James Rollins / Actions & Adventure / Thrillers & Crime have rating 5.7 out of 5 / Based on34 votes