&quot;Pine&quot; and 7 Other Short Romances, Page 1 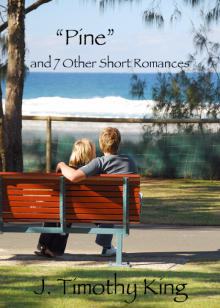 and 7 Other Short Romances

This is a work of fiction. All the characters and events portrayed herein are fictitious or used fictitiously. Any similarity to actual persons, living or dead, or actual events is entirely coincidental.

“Pine” and 7 Other Short Romances

Each morning Jace walked by her house on his way to school. Each afternoon he passed it on his way home. Sometimes, he also passed at other times. Occasionally he caught a glimpse of the bright-faced girl with wavy blonde locks. She sat under the two conifers that towered overhead. But as far as he knew, she never noticed him.

The house itself, a grey Stick Victorian with brown trim, spoke of a happy family. Its expansive porch took a jaunt through the sweet-scented yellows and reds of the flower garden. Little gabled alcoves jutted into the world, embraced by the overall form of the structure, as if its gables were parents looking after their offspring. A squat wall of white stone stood, isolating the yard from the public sidewalk, making up in intensity what it lacked in stature, a formidable protector to all within.

But the trees were even more special, for under these Jennifer would read. Or sometimes she would just be sitting quietly or humming softly a tune Jace didn’t recognize. Jace paid her no heed, or else she might see his admiration. But out of the corner of his eye, he noticed her shapely form, and he fought to keep breathing. And in his imagination, he felt the softness of her pink cashmere sweater in his delicate hands. He felt her fingers running through his thick, dark hair. Her chocolate eyes and his ordinary brown ones got lost in each other. Perhaps his finger stroked the line of her eyebrow, following her face around softly-curved cheek and jaw, finally resting under her chin.

But Jace said nothing, made no motion out of the ordinary. He merely continued walking, as nonchalantly as possible for a big-footed, lanky teen in a grey tee and worn khakis.

Jennifer walked into second-period Algebra wearing a close-fitting, short-sleeved salmon top and jeans. Jace looked up to see her flip her hair over her shoulder, sending a scented breeze wafting over his face.

In fifth-period study hall, Jennifer read. Jace took out a pencil and sketchbook, and he drew. From his seat two rows behind hers, Jace filled a page with sketches. At one point, Jennifer peered in his direction. Jace quickly buried himself in the papers on his desk. It was only partially an act. From his mental snapshot, he saw dark eyes, sultry, staring at him, which with talent and skill he transferred to the page.

In sixth-period English class, Jennifer sat at the desk directly in front of Jace. At one point, she turned to him. “I broke my pencil. Do you have an extra I could borrow?”

“Yeah.” He always carried surplus sharp pencils. Jace handed one to her.

The bell rang signaling the end of the day. As Jace started his walk home, Jennifer caught up to him.

“Jace!” She proffered the borrowed pencil. “Here’s your pencil. Thanks.”

He took it, but just for a moment, she held on to the pencil, would not release her grip, and Jace wondered whether she wanted to keep it. As far as he was concerned, she could. It was only a pencil.

“You were really a life-saver,” she said.

“It was no big deal,” Jace replied. It was only a pencil; he had only saved her a trip to the pencil sharpener.

They talked as they walked, mostly trivia—school, the weather, the ball game—until they reached Jennifer’s house.

“Can I show you something?”

Jennifer led him up the path and under the tall trees.

“This is one of my favorite spots,” she said.

The shade was cool, and the air smelled of pine. Birds sung through a light breeze, which gently vibrated the branches in an awkward motion Jace could never figure out. Jennifer leaned against one of the trees.

“Sometimes I imagine standing under these trees and getting kissed by a boy I really like.” She giggled coyly. “It’s just a silly fantasy.”

She rubbed her foot through the blanket of needles underneath. Then her gaze met his.

“I guess everyone has silly fantasies like that sometimes.”

“I’d love to see some of your drawings,” she said.

“I saw you drawing a picture one time. It was pretty good. It looked like you did it a lot.”

He pulled from his book bag a sketchpad. “Here,” he said, and handed it to her.

They sat next to each other under the trees, and she opened the first page to reveal a rough rendering of a house. On the next page some neighborhood kids played at the playground down the street. Then came a local road with cars, a bicycle and rider, someone working in an office.

She turned the page again, and her own face gazed back at her as if she were looking into a mirror. But the face in the mirror was beautiful, suave, womanly, yet still young. It was the face of a supermodel, but not fake like supermodels can be; it was a real person, of flesh and blood and graphite.

Jennifer swallowed. “This is really good.”

The page after that was a collage of Jennifer. She was cute, sophisticated, sexy, humble, studious, and numerous other qualities for which there are no words.

Jennifer didn’t look angry or scared as she looked him in the eye. She took a breath. “Will you kiss me?”

Having previously only fantasized of the moment, Jace was now confused by the reality of it. Not knowing what to do, he froze, eyes wide and transfixed, unable to move forward, unable to run away. He could almost reach out with his mind and bridge the gap. But not all of the will power in the world would alone solidify these vibrant images and give them physical form.

Dizzy, as if in a dream, he touched his lips to hers, soft and full. She smelled good. He put his arm around her, and his hand passed over the strap of her bra. Her body was warm and there. She put her hand on his leg.

A moment later, he counted her eyelashes. He touched his thumb to her eyebrow and traced it around, and Jennifer snuggled her cheek into Jace’s palm. Her skin was soft. It was smooth. And she looked happy.

“Can you sit with me for a little while?”

The next day, Jace had to walk on the grass as he passed by the house, because the green and white moving van was taking up the whole sidewalk. He hoped to catch a glimpse of Jennifer, but she was nowhere to be seen.

Now when Jace walks by the house, he sometimes sees two young children playing in the yard. Jace has Jennifer’s new address, and they’ve exchanged one or two letters. But he doesn’t know whether he’ll e
ver see her again. He figures, even if you’re an artist, sometimes you draw dead. Still he imagines he sees Jennifer sitting under the pines, reading or humming softly a tune he doesn’t know.

A Penchant for Cotton

She approaches me during my lunch hour in the park, wearing a white, cotton T-shirt, along with blue shorts and sneakers. She has propped her smooth, right leg on a bench near where I am sitting and is tying her shoe. My eyes fix, unable to move from their stare.

My first crush wore cotton T-shirts, soft and warm, like a woman. I accidentally bumped into her one day while filing into Algebra class. My arm rubbed against her back, feeling her bra clasp through the thin, white fabric. My entire body involuntarily froze for several seconds. I remember feeling as though I had just touched something sacred, maybe defiled it, like Moses at the burning bush or Isaiah in the temple.

I did not tell my friends, because boys don’t talk about their feelings. However, I took every opportunity over the next days, weeks, months—one of those—to study her face, her hair, her body, every detail, from my seat one row behind her and halfway across the room. I still remember long, straight, dark hair drawn up at the side with a barrette, flowing around a thin, fair-skinned face, concave nose, gentle jaw and chin, long neck.

Once, she looked over in my direction, and I quickly turned my attention to the open book lying on my desk.

Finally, the kid beside me asked, “Do you like her?” I shrugged.

“She’s cute,” he continued. “Hey, you should talk to her.” I didn’t know if that was such a good idea.

“You should ask if you can walk with her to her next class.” Walking with her, that was an idea I could get