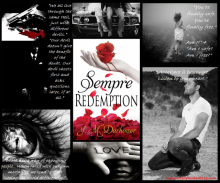 On October 12, at 11:56 in the evening, Corrado Alphonse Moretti died.

There had been a strong lurching in his stomach and a sudden wooziness as blood gushed from the bullet wounds in his chest. Pain swept from his body like a rolling wave, numbness swallowing him whole. Everything blurred, sights and sounds distorted, as reality twisted and the world around him faded away.

And then there was nothing.

No bright lights. No gentle voices. No angelic presence. Only blackness. He heard nothing, he saw nothing, and he felt nothing. After everything Corrado had done in his life, he had expected hellfire and brimstone.

He was a bit disappointed, to say the least.

A few minutes later, at exactly midnight, Corrado was violently shocked back to life. His heart beat once again as oxygen saturated his body, but his newfound peace was instantly destroyed: The moment they brought him back into the world, ripping him from the darkness of afterlife, he was transported to a time he had long ago wished to forget.

It was a decade earlier but only a few feet away from the small, dingy hospital room he now lay in, soiled with blood, sweat, and bitter tears. The room from ten years before had been filled with the same feeling—heartbreak and misery, the harsh stench of imminent death thick in the air.

Corrado stood quietly in the doorway that warm October day, his eyes fixed inside the sterile room. Carmine DeMarco had always been slightly small for his age, but he seemed so minuscule in the large hospital bed. Tubes and wires ran from his frail body to various machines surrounding him, their humming and beeping not enough to drown out the strangled voice in the corner.

Vincent DeMarco sat near his son, rocking and frantically muttering to himself. Corrado had never seen him so out of control before, agitated and deranged almost like a feral animal. His sanity was slipping, his hair a dirty mess and his shirt soiled with blood. Vincent’s wife’s blood, to be precise . . . blood that had been spilled less than twenty-four hours before.

The sight of it sickened Corrado. It wasn’t the first time he’d seen Maura’s blood, but it would certainly be the last. She was dead and never coming back, but Vincent was clearly struggling to accept the truth.

Corrado wanted to tell him to stop being absurd, but it would be a waste of breath. He couldn’t comfort him. No words would take his pain away. And, truthfully, Corrado couldn’t imagine the anguish his brother-in-law felt. He didn’t fear death, didn’t fear jail or eternal damnation, but one thing he couldn’t fathom was losing Celia. He’d vowed to honor her, to cherish her, to protect her . . .

It was no wonder Vincent was so quick to take the blame. He had failed at that—he had failed to protect Maura.

Sighing, Corrado glanced back at his nephew. Carmine had been found near death behind Tarullo’s Pizzeria. They didn’t know what had happened yet, but one thing was clear: whoever ambushed them intended for the boy to die, too.

That fact made Corrado feel even sicker. He had never been particularly fond of children, with their needy ways and grubby little hands, but one thing he treasured was innocence. He envied it. He had murdered many men during his years with La Cosa Nostra, but he prided himself on never killing anyone he felt didn’t deserve his wrath.

And staring at his nephew, so helpless and vulnerable, Corrado couldn’t imagine what would possess someone to harm him. It was unheard of. Some things even the wickedest of men didn’t tolerate, and killing a kid in cold blood was one of those things.

Things were different now, though. As much as it infuriated him, times were changing, and he wondered what that meant for Carmine. At only eight years old, he had been thrown headfirst into the lifestyle. When he woke up—if he did—his world wouldn’t be the same. Whether Carmine liked it or not, he couldn’t escape the life. Not after this. He was now a part of it, and Corrado knew he would spend the rest of his life trying to make sense of the chaos.

Hatred brewed in Corrado’s gut, hot like molten lava. The longer he stood there, listening to the babble of a devastated man, the angrier he grew. All he could think about was getting revenge on the people who had hurt them. Not only did his vow to the organization demand it—an eye for an eye—but so did his weary heart.

Corrado’s heart, a decade later miraculously holding steady on the cardiac monitor, grew stronger every passing day. He would survive the shoot-out in the Chicago warehouse. The Kevlar Killer would live to see another day.

On December 1, after being comatose for six weeks, Corrado Alphonse Moretti opened his eyes.

The black Mazda RX-8 sped along the worn gravel road, twisting and turning as it penetrated deeper into the foothills of the Blue Ridge Mountains. Haven clutched the passenger seat as the car haphazardly weaved through the dense forest.

“Are we lost?” she asked hesitantly as she stared at her boyfriend. Carmine was slouched in the driver’s seat, fiddling with the radio. Sunglasses shielded his eyes from her, so she couldn’t tell if he was paying any attention to the road.

Haven glanced out the windshield, squinting from the early morning sunshine. Things looked the same in every direction—nothing but endless trees surrounding them. How could he know? “Are you sure?”

She shook her head. Stubborn. “Where are we going?”

She started to grow frustrated when he jerked the wheel to the left, nearly skidding off the narrow road. Her seatbelt locked in place, tightly confining her in the seat, as she inhaled sharply. Before she could let out the scream that bubbled up in her chest, Carmine pulled beside a fence along the road and cut the engine, turning to her with a satisfied smile. “See, not lost. ”

Haven shook her head and surveyed the area. At first it appeared to be nothing unusual, a small gap in the trees with a cabin set a few yards away, until she spotted the faded white sign in the distance. LANDELL CHRISTMAS TREE FARM, it said in green hand-painted letters. Excitement stirred inside of her, but it was quickly crushed when she read on: OPEN NOVEMBER 22 TO DECEMBER 22.

Although it felt as if time had stopped for the two of them, the calendar told a different story. It was December 23 already, a month since they had returned to the small North Carolina town of Durante in an attempt to get back to their lives . . . in an attempt to regain a bit of normalcy and piece together their relationship. Dealing with the fallout of her kidnapping had been a struggle, but they took it day by day . . . minute by minute . . . second by second.

“They’re closed, Carmine,” she said, frowning as they got out of the car. She shivered and wrapped her coat tighter around her to ward off the cold. “Yesterday was the last day. ”

Carmine opened the trunk and pulled out an ax, slinging it over his shoulder. “I know. ”

She watched, mouth agape, as he climbed the wooden rail fence surrounding the property and leaped to the other side. “Isn’t that breaking and entering?”

He held his free hand out to help her over. “More like trespassing. ”

Haven sighed and started to respond, but his look pleaded with her not to argue. Hesitantly, she conceded and took his hand. Carmine helped her across the fence, lacing their fingers together and squeezing gently.

“Are you sure about this?” she asked.

“Yes, I’m sure. It’s Christmas, and this is
what Christmas is all about. ”

“No, picking out trees and decorating them with colored balls and other frilly shit. It’s about mistletoe and presents and lights and stars and family and eggnog. A lot of fucking eggnog, but without the egg and the nog and the other shit they put in with the alcohol. It’s disgusting. ”

“And here I thought it had something to do with religion. ”

Together, they walked through the tree farm. Haven would occasionally stop and point one out, but each time Carmine seemed to find some fault with it. Too short or too tall, too thick or too thin, too many branches or not enough needles. He disregarded them because of their color, refused trees because of their shape, and simply scoffed when she suggested they look at the pile of leftover precut evergreens.

“How about this one?” she asked after a while, stopping in front of a tree a few inches taller than her. “Do you like it?”

Haven’s brow furrowed, unsure as to what he was talking about. The branches appeared full to her. “So finicky. ”

“Whatever,” he muttered. “Do you see any others?”

“Uh . . . ” She glanced around, randomly motioning toward another tree a few feet away. “What about that one?”

Carmine scanned it. She awaited his complaint, sure he would find a flaw in it, but he smirked instead. “Perfect. ”

She was surprised. “Are you sure?”

Haven shrugged. Every single one of them looked the same to her—just like the hundreds of others they had passed along the road on the way. “It’s fine with me. ”

Letting go of her hand, Carmine studied the tree, deciding how to go about taking it down. Haven watched him for a moment, the scene surreal, and burst into laughter when he took his first swing. It barely even sliced the thick bark.

“This is going to take you all day,” she said. “We should’ve just picked one that was already chopped down. ”

Haven thought coming to a tree farm was cheating itself, considering they could have taken one of the small ones from the backyard, but she thought better of pointing that out. His frustration mounted with each swing of the ax, and she didn’t want to make it any worse.

He whacked the trunk repeatedly, the blade eventually cutting through the wood. Despite the cold temperatures, by the time the tree tilted Carmine was huffing and drenched with sweat. It gathered along his forehead, ran down the side of his face, and dripped from his chiseled jaw. Haven watched him struggle in silence, a familiar pang of guilt deep down inside of her gut. It was always subtly there, lurking, violently striking when she least expected it to, like a startled viper fighting for its life. It viciously gnawed at her, poisoning her insides and conjuring up intense feelings of shame when she was reminded of what he had done.

This boy—this stubborn, selfless, stupid boy—had given himself to the Mafia. He had handed control of his future over to the men they hated most in exchange for her life. For her safety. And he had done it so easily, so quickly, like he didn’t have to think about it at all . . . like sacrificing for her came just as naturally as breathing.