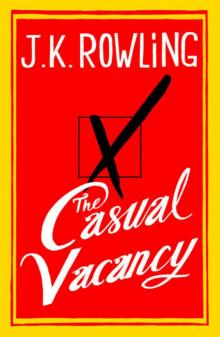 6. 11 A casual vacancy is deemed to have occurred:

(a) when a local councillor fails to make his declaration of acceptance of office within the proper time; or

(b) when his notice of resignation is received; or

Barry Fairbrother did not want to go out to dinner. He had endured a thumping headache for most of the weekend and was struggling to make a deadline for the local newspaper.

However, his wife had been a little stiff and uncommunicative over lunch, and Barry deduced that his anniversary card had not mitigated the crime of shutting himself away in the study all morning. It did not help that he had been writing about Krystal, whom Mary disliked, although she pretended otherwise.

'Mary, I want to take you out to dinner,' he had lied, to break the frost. 'Nineteen years, kids! Nineteen years, and your mother's never looked lovelier. '

Mary had softened and smiled, so Barry had telephoned the golf club, because it was nearby and they were sure of getting a table. He tried to give his wife pleasure in little ways, because he had come to realize, after nearly two decades together, how often he disappointed her in the big things. It was never intentional. They simply had very different notions of what ought to take up most space in life.

Barry and Mary's four children were past the age of needing a babysitter. They were watching television when he said goodbye to them for the last time, and only Declan, the youngest, turned to look at him, and raised his hand in farewell.

Barry's headache continued to thump behind his ear as he reversed out of the drive and set off through the pretty little town of Pagford, where they had lived as long as they had been married. They drove down Church Row, the steeply sloping street where the most expensive houses stood in all their Victorian extravagance and solidity, around the corner by the mock-Gothic church, where he had once watched his twin girls perform Joseph and the Amazing Technicolor Dreamcoat, and across the Square, where they had a clear view of the dark skeleton of the ruined abbey that dominated the town's skyline, set high on a hill, melding with the violet sky.

All Barry could think of as he twiddled the steering wheel, navigating the familiar turns, were the mistakes he was sure he had made, rushing to finish the article he had just emailed to the Yarvil and District Gazette. Garrulous and engaging in person, he found it difficult to carry his personality onto paper.

The golf club lay a mere four minutes away from the Square, a little beyond the point where the town petered out in a final wheeze of old cottages. Barry parked the people-carrier outside the club restaurant, the Birdie, and stood for a moment beside the car, while Mary reapplied her lipstick. The cool evening air was pleasant on his face. As he watched the contours of the golf course disintegrating into the dusk, Barry wondered why he kept up his membership. He was a bad golfer: his swing was erratic and his handicap was high. He had so many other calls on his time. His head throbbed worse than ever.

Mary switched off the mirror light and closed the passenger side door. Barry pressed the auto-lock on the key-ring in his hand; his wife's high heels clacked on the tarmac, the car's locking system beeped, and Barry wondered whether his nausea might abate once he had eaten.

Then pain such as he had never experienced sliced through his brain like a demolition ball. He barely noticed the smarting of his knees as they smacked onto the cold tarmac; his skull was awash with fire and blood; the agony was excruciating beyond endurance, except that endure it he must, for oblivion was still a minute away.

Mary screamed - and kept screaming. Several men came running from the bar. One of them sprinted back inside the building to see whether either of the club's retired doctors was present. A married couple, acquaintances of Barry and Mary's, heard the commotion from the restaurant, abandoned their starters and hurried outside to see what they could do. The husband called 999 on his mobile.

The ambulance had to come from the neighbouring city of Yarvil, and it took twenty-five minutes to reach them. By the time the pulsing blue light slid over the scene, Barry was lying motionless and unresponsive on the ground in a pool of his own vomit; Mary was crouching beside him, the knees of her tights ripped, clutching his hand, sobbing and whispering his name.