A Zombie For The Holidays, Page 1 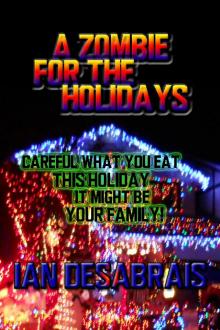 A ZOMBIE FOR THE HOLIDAYS

This book is a work of fiction. Names, characters, events, and locations are fictitious or are used fictitiously. Any resemblance to actual persons or events, living or dead, are entirely coincidental.

This ebook is licensed for your personal enjoyment only. The book contained herein constitutes a copyrighted work and may not be reproduced, stored in or introduced into an information retrieval system or transmitted in any form or by any means (electrical, mechanical, photographic, audio recording, or otherwise) for any reason (excepting the uses permitted to the licensee by copyright law under terms of fair use.) without the specific written permission of the author.

If you would like to share this ebook with someone else, please purchase an additional copy for each recipient. If you are reading this book and did not copy it, please purchase your own copy. Thank you for your support and for respecting our work. Enjoy your read.

You can also check out my tumblr page

Also check out a book I write online with Ivan Desabrais.

Comments can be sent to

Be careful what you eat this holiday, it could be your family.

To all my wonderful tweeple who follow me on @myzombiejournal, I appreciate you. Enjoy my free story.

This stories may not be suitable for young readers. It may contain real and mature themes. It may give you nightmares. It will make you think about zombies.

A father, husband, man named Rex, finds himself in a department store on Christmas Eve. People are fighting and screaming, there is blood and there's darkness. Hiding from the crazy people tearing each other apart, he asks himself a question, 'Will I make it out alive?'

“What the hell is going on?” I asked anyone in general.

Racks of clothes were knocked to the ground. A woman with red hair screaming, some psycho chick had a handful of her hair. This is what I get for shopping on christmas eve.

“A fight dummy,” a smug jerk said at my side.

I looked at him, his brown eyes lowered. None of this would matter to me if the damn present I ordered my wife arrived on time. Got an email around 5pm telling me they wouldn’t be able to ship the package for two weeks.

“Who do you think you are?” I asked the jerk.

I stared him down, he shifted his vision back to the scene before us. A crowd was surrounding the battle, like some epic in ancient Rome, gladiators fighting for the prize. A shriek unlike anything I’ve heard, I’m sure it would’ve made those horror movie babes jealous.

The surrounding crowd howled out and stampeded away. They scattered in fear, a group charging in my direction. I maneuvered between the wild crowd. My actions brought me right onto the scene of the fight. What were they running from?

The red haired woman was on the ground, a shocking amount of blood pooling around her, she must have been stabbed. Her attacker, a lithe girl around mid twenties was on top of her. She was tearing at her victim’s shirt exposing flesh. Nobody was doing anything, just fleeing from the area. I moved closer. The psycho chick took a mouth full of the red head’s flesh and bit down, she tugged at it like a dog. What the hell was she doing?

The psycho chick half looked up at me, blood dribbling from the strands of flesh in her mouth. Her teeth broke the skin, she yanked back and chewed on it like a ravenous animal, making strange gurgling sounds. I was transfixed, I wanted to do something, but the scene was so strange I didn’t know what I should do. The psycho cannibal lunged back on top of her victim, she took another big bite out of her.

The psycho looked up at me, her soulless black as death eyes cutting a hole to my soul. My wife would be pissed right now, she never wanted me to get involved in anything that didn’t concern our family. I maybe should have listened here, but my wife and kids were safe at home and I was in the moment.

The dead girl crawled over her victim towards me. Why would I think she was dead? Her mouth opened, revealing her crimsoned teeth, a strange throaty groan escaped her. It sent chills through my body.

I was moving back and the psycho was crawling after me. A few people rushed to the bleeding lady, one of them possibly a doctor, he was giving out orders to the others.

“Calm down,” I told the psycho.

This is one crazy night, what did I get myself into? I continued backing away with her following me. Someone talked over the intercom, a girl, she sobbed, it made her announcements inaudible. I bumped into a product shelf. The psycho leapt at me. I twisted and tried to move away. She grabbed my leg and sunk her teeth into my calf, right through my pants.

Her ferocious bite broke my skin, I could feel the warm trickle of blood dripping down my leg. I grabbed a handful of her dark hair, lifted her head and swung the psycho away from me, she smacked onto the ground.

“What the hell is wrong with you?”

This is nuts, I wanted nothing more then to be at home playing some PS3 with my son, damn he got me addicted to it.

The psycho chick got to her feet, staggering like a drunk. The doctor was approaching her from behind, his hands up prepared to protect himself if something happened.

She spun around and clawed at him, he bawled like a wounded beast and stumbled back, a gash ripped open on his face from her deadly fashioned nails. Sirens wailed, employees rushed to the doors. The police entered and chained the entrance at their backs. What the hell was that about? There was something off about these two, they already had their guns out.

“Okay, everybody get back,” the grey haired officer said.

Really I don’t know if he was a cop, he had a uniform and a badge but I’ve never seen it’s kind before. No way was his gun police issue. He had an ammo pouch on his side. The armed men continued closer.

“It will be okay,” the grey haired one said, then mumbled some code into his radio.

They past the red haired victim on the ground.

I didn’t like what was said. I had the instinct to flee. The grey haired man aimed his shining gun at the woman who bled out on the ground. BANG. Part of her head blew off.

The psycho had her head tilted inhumanly to the side. This is the first time I noticed her appearance. Her lips black, thick veins in her face and a
rms.

The grey haired man swung around, his gun aimed at me then crossed over to the dark haired girl who started this all. BANG. The psycho’s blood splattered over my shirt, her body lifted and crashed to the ground.

The doctor was trembling, he kneeled by the psycho and checked her.

“You killed this woman.”

“She was already dead,” the grey haired man said.

“Morgan, what’s going on in there? We heard shots,” a woman’s voice questioned over his radio.

The grey haired man kept his gun aimed on me, “The virus has spread, had to cure a few.” He motioned towards his partner. “Junior get over here.”

The younger man sprinted over.

“Shit, look at his face,” Junior said pointing at the doctor.

Morgan turned his gun on the doctor and shot, his brains scattered and lifeless body fell to the ground. The gun swung back aiming at me. I wanted to run right there, to get the hell out of this godless place.

“Junior check him out, there was an infected right next to him.”

The young man walked to me, his dark pistol found his hand and he pointed at my face.

“You bit or anything?” Junior asked.

Bit, shit, that psycho tried to have a snack of my leg. I could still feel the blood on my calf. They killed the red head, the psycho and the doctor, I did not want to be next.

“Take off your shirt,” Junior ordered.

I was not interested in getting my brains blown out. Morgan came closer, he pointed his gun at my chest.

“You need to take your clothes off, you have blood all over you.”

I looked down at myself, he was right, I had no other option at his point. Maybe I could lie about the bite on my calf. People were standing around filming with their cellphones and these two armed men didn’t seem to care. None of the customers or employees were moving to help me. I started unbuttoning my shirt. Thanks you bunch of jackasses, stand there filming while I get my head blown apart.

Morgan sighed, he turned to her. His gun sank back into it’s holster at his side. I took a few steps back, not enough for Junior to notice.

“There’s a very dangerous infection going around, we have to stop it before the virus spreads.”

The girl looked concerned, “What are you going to do with him?”

Morgan looked back at me. The store blacked out, no lights on anywhere. Screams and yells roared out.

“Something grabbed my arm,” Junior cried.

My ears rang, but I wasn’t hit. That crazy bastard just shot somebody, hopefully his partner. Had to get far away from them. I slammed into somebody, we both tumbled over.

“ASSHOLE,” the guy I ran into yelled.

I fumbled through my pockets and found my slim cellphone, it was in sleep mode. I hit a button and a dull white glow was emitted. The guy was still on the ground, he looked across at me.

“What happened to the lights?” He asked.

I didn’t know how to answer, held back what I saw.

Got to my feet, using my cell as a light source. I looked back a the guy on the ground. A hand grabbed onto his shoulder, my heart jumped. He turned to find out who it was. I leaned in bringing my cellphone closer. A man’s face came from the darkness, his dull eyes staring at me. A hissing groan came from him and he sank his teeth into the man’s shoulder, he screamed and struggled against his hungry new friend. Another set of hands came onto him and a throaty growl. Together the infected yanked him into the darkness, the guy screamed out. There was groaning and a guttural growl, smacking lips and a sound much like cutting through a watermelon.

I didn’t want to stick around. My cell blacked out on me, I hit a button and the white glow tore through what darkness it could. My feet just couldn’t move fast enough. People were calling out all around the store, worried and in panic.

“Everyone stay calm,” a woman’s voice called out. “Emergency lights will be on soon, stay still and be careful.”

“My son,” a young woman’s voice