Part #1 of The Sheikh's True Love series by Holly Rayner 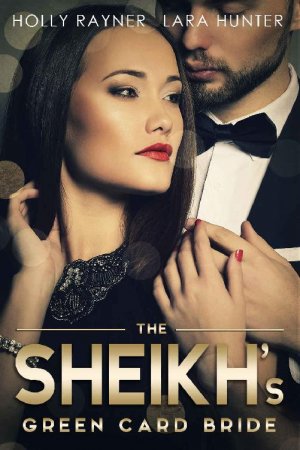 Not including the three-hour delay on her flight from Seattle, she’d been traveling to the Dubai office for more than a day, and the time change was something she could never seem to get used to. Now, her black heels clicking across the airport floor, she stifled another yawn as she made her way down the escalators and toward the long line of drivers. Her name was printed on a large white sign held by a dark-skinned gentleman in a very sharp suit.

“Miss Calvert?” the man said as she approached, and Nicole nodded.

“Yes,” she replied, her voice weary.

The man nodded back at her and lowered his sign, gesturing for her to follow him out of one of the sliding glass doors.

The city was baking in the hot desert sun, and Nicole tilted her head up ever so slightly to catch a few rays on her pale skin. To bare one’s face in the Middle East was sometimes considered a bad move culturally, but Dubai was different. It was the perfect blend of East and West, and while Nicole didn’t exactly appreciate the time it took to get there, she couldn’t fault the city for it.

Her driver approached a sleek black car and opened the rear passenger door for her.

“Miss,” he said, standing back and taking her bag to place in the trunk as she slid inside and shivered under the air conditioner’s blast.

Nicole enjoyed the cold. She was a Seattle native, and had had no other choice growing up—either you liked clouds, or you moved. Still, she traveled to Dubai twice a month, and her body never ceased to complain as it fought time and time again to adjust to the unforgiving desert heat.

She reached into her purse and pulled out a hair tie, running her slender fingers through her long blond hair as she pulled it away from her face. Taking a deep breath, she leaned into her seat, and tried not to think about sleep. Pure, beautiful, peaceful sleep. In a big bed with duvet comforters and fluffy pillows…

Stop it, she thought, chiding herself.

She dug a manicured nail into her arm to keep herself awake, trying to think about anything other than the sheer bliss it would be to close her eyes and dream of an easier life.

Nicole hadn’t always been a personal assistant. She had passed the Bar the previous year, before landing a coveted spot on the legal team of Futurescapes International. It had been an exciting few weeks working for one of the fastest-growing tech companies around, and Nicole had loved every minute of settling into her new job.

One day she’d been walking down the hall of the company’s Seattle offices when she’d run into the CEO himself.

“Oof!” she’d uttered as she collided with Bahir Al-Jabbar.

The man wasn’t even thirty years old yet, and his olive skin and honey-colored eyes made him disconcertingly handsome for a company boss and one of the world’s youngest billionaires. That was the man gently holding onto her arms, keeping her coffee from spilling all over the floor.

Bahir’s eyes were intense as he looked at her, and Nicole winced as she waited to be fired. Bahir had a reputation for being a fair and generous business owner, but she knew that so early into her contract, one mistake could be it.

The CEO released her arms and crossed his, staring at her with a thoughtful expression. “Nonsense, I wasn’t looking where I was going. But now that you’re here in front of me, would you mind coming into my office for a moment?”

Bahir laughed. “Let’s tone it down with the ‘sir’ stuff, OK? Call me Bahir.”

“Yes…Bahir,” she said, the foreign name sounding awkward on her tongue.

Bahir strolled ahead of her down the clean, sparse hallway. His office took up a whole corner of the thirty-second floor, surrounded entirely by floor-to-ceiling windows, and Nicole could see the Space Needle the moment she stepped inside. She had been working at Futurescapes for several weeks already, but had never set foot inside that office before. She held in her gasp of amazement; the view was incredible.

Bahir slid behind his desk, sinking into a large leather chair. The desk was enormous, but felt appropriate considering the size of the room. He continued to stare at her, and Nicole shifted from one foot to another in her heels. Finally, he spoke.

“Calvert. Nicole Calvert, sir. I’ve been on your legal team for three weeks now, sir,” she said, hoping she wasn’t sweating. She clung to her paper coffee cup for dear life, though the liquid had already gone cold.

Bahir grinned, a small dimple gracing his left cheek. “Nicole, I’d like to be frank with you, and I can’t do that if we’re sticking to formalities,” he said.

Nicole cleared her throat, not sure what to say.

“Is there anything I can do to make you feel a little more comfortable?” Bahir asked, and Nicole let out a laugh.

“Maybe just be a little less rich and powerful,” she said—what she didn’t add was “and a lot less handsome.”

Bahir’s grin deepened as he twirled his chair around to look out at the Seattle cityscape. “Well that I can’t do, but I think you’ll see that I’m just a regular person, in time.”

“Regular for who? Prince William or the President?” Nicole replied with a nervous laugh.

He could call himself normal all he wanted, but there was nothing “regular” about Bahir Al-Jabbar. He had been raised the son of a powerful Middle-Eastern sheikh, and given all the best the world had to offer. He’d converted his first-class education into a successful career as a tech entrepreneur. He enjoyed a world of yachts and islands, beautiful resorts and corner offices with panoramic views. To the average person, Bahir was more god than mortal.

As he turned back to face her, Nicole tried to remove that comparison from her mind. The man wanted to be treated as an equal, at least to some extent. Nicole would try and give him that.

“I can assure you, Ms. Calvert, princes and presidents are also just regular people. They take showers. They like bagels. Sometimes they might wear the same pair of jeans more than once,” he said with a glimmer in his eye.

He was teasing her, Nicole thought, and she allowed the tension in her shoulders to ease just a notch.

“Well then, if we all like bagels, I suppose there’s no reason why we can’t all get along,” she said lightly, pushing down her trepidation.

Bahir leaned in and placed his forearms on his desk, and Nicole took a small, subconscious step back.

“All right then, Nicole. Now that we’re on the same level, I was hoping you could accept a promotion.”

Nicole blinked. “A what?”

Bahir sat back in his comfortable chair, his gaze intent, even as mirth shone through his eyes.

“A promotion? You know, like a raise and an elevated position?”

Nicole couldn’t help but be honest.

“Why would you give me a promotion? I’ve only been here three weeks, and you just met me five minute ago when I nearly bulldozed you in the hallway. What possible reason could you have for promoting me?”

Bahir reached out for a pen and twirled it between his fingers as his penetrating stare continued to bore into her.

She could see then how he won out negotiations with business competitors and industry experts. His presence was strong and imposing, all while being somehow warm at the same time.

Finally, he set the pen back on the desk, breaking his stare.

“I like you, Nicole. You’re honest, and I don’t get a lot of honesty around here. As you mentioned, people are intimidate
d by my position of wealth and status, and tend to hold back around me. The reason I’m offering you a promotion is because my personal assistant has decided to abandon me and leave me helpless. Just now I ran into you, a competent, capable employee, and voilà: new personal assistant!”

Nicole stared at him for a moment before replying.

“You want me to be your…assistant?” she asked, dumbfounded.

Bahir sighed. “That’s what I just said, isn’t it?”

“And how is that a promotion, exactly?” she asked, taking a seat in a plush, leather sofa across from the desk. Her feet were killing her in her heels, and she couldn’t keep thinking straight standing up. What was going on?

Bahir raised one perfectly-arched eyebrow. “I should think it’s quite obvious. You’ll be working directly with me at all times, traveling with me, ensuring that business is conducted successfully. I can increase your salary by fifty percent, and there are excellent perks.”

“Does the job require a degree?”

Bahir waved a hand dismissively. “I don’t know, probably. You already have one, so we’re good there.”

Nicole leaned in, capturing his gaze and not letting him look away.

“I have a J.D. in International Business Law, sir,” she said, nearly hissing out the last word. “I think my time is worth more than running errands and currying favor for a billionaire. Besides, do you even know what I earn?”

Bahir shrugged. “No. Why, you think I won’t double it? I’ll triple it. Please, Nicole,” he said, leaning in, his eyes beseeching.

Nicole felt her heart speed up at those words. It felt strange to be begged by such a rich and powerful man. Her boss, no less.

She thought about it for a moment. Of course she could use the money. Her education had cost more than a house, and with triple her salary she could pay off her loans in no time, if Bahir was good for his word. But at the same time, Nicole was a lawyer. She had worked relentlessly hard to become one, studying for night after sleepless night, determined to succeed. Could she really give that up to be his little errand girl?

“How long is what?” he asked with just a flicker of a smile, and Nicole felt herself blush even as she pressed on.

“How long would I work this position before I could go back to the legal team?”

Bahir shrugged. “I’m sure we can find a replacement soon—in a few weeks, perhaps. You know the hiring process can take some time. I’ll ask you one more time, Nicole, and I’m not a man used to begging, so please put me out of my misery here.”

His tone carried a slight edge this time. It was almost enough for Nicole to balk, but then another thought caught her mind.

Her younger brother would be graduating from Stanford in a few short weeks. Maybe she could pass the job on to him, and kill two birds with one stone. Failing that, at the very least, she could hopefully get him a job in the company. Being this close to Bahir could increase her chances of helping him. It was enough to sway her decision.

“I’ll take double my salary until I am reinstated on your legal team,” she said, and Bahir flashed her a very bright and charming smile.

“Fantastic. It’s yours. Now, here’s a list of things I need done by six o’clock tonight,” he said, immediately back to business.

He held out a messy pile of papers and folders to Nicole, who took hold of them haphazardly, trying not to spill everything on the floor. Staring at the pile, she could see a jumble of handwritten notes and typed up memos.