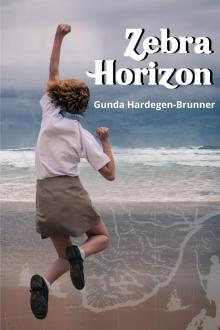 All rights reserved. This book or any portion thereof may not be reproduced or used in any manner whatsoever without the express written permission of the publisher except for brief quotations in a book review.

All characters in this publication are ficticious and any resemblance to real persons, living or dead, is purely coincidental.

Other Books by Gunda Hardegen-Brunner

Sample Chapters from other books

When I was 12, I decided that there must be more to life than going to school in a little Bavarian town. I told my parents, that all I wanted for my birthday, was to be sent to Summerhill School in England, a place where they knew that it is more important for children to be themselves, than force them to learn the anatomy of the inner ear and make buttonholes by hand – in the age of the automatic sewing machine. My father told me I was crazy. I wrote to the headmaster of Summerhill anyway. He sent me a very funny letter, at the end of which he said, that I was already too old to start at his school. He probably thought I was too far down the process of becoming a ‘good’ citizen.

My friend Anna and I then wrote a poem of 23 verses, in which we gave our school a piece of our mind. It filled 3 pages in the school-newspaper and became the scandal of the district. The newspaper was promptly banned and the only reason the school didn’t expel us was that Anna nearly died because of a burst appendix, and they couldn’t put more strain on her mother, who had already lost 13,5kg in 2 weeks, she was so worried.

I boycotted the buttonhole/needlework classes as much as possible. It wasn’t easy, because that old witch Frau Semmelweiss would wait in front of our door 10 minutes before her time to take over, to make sure that nobody escaped. That’s why I also had to skip the English classes and my English marks were terrible. Later, when my National Geographic collection took up about 2 cubic metres of my room, I knew words my teacher hadn’t even heard of, but my marks were still terrible, because my vocabulary was not in the curriculum. I realized that to get away from the German system I would have to persuade my parents to emigrate. I immediately ran into problems. My father, a doctor, said the tropics were out because he had no inclination to live in countries with mosquito borne diseases. My mother said Muslim countries were out because she could not abide their dress code. She had got herself arrested once before while on holiday in Spain, because she insisted on tanning in the nude. I was more for respecting other people’s cultures.

When I was 16, I discovered an article about ‘exchange students’ in my dad’s Rotary magazine. I went straight to the president of his club, who was a bit surprised, because I was the first and only applicant, who had ever walked into his office. After I had explained the procedure to him, he accepted me without further fuss as a candidate.

I didn’t know it then, but that trip was going to change my life.

Africa appeared at the first light of dawn. The Sahara stretched like a dark, frozen ocean 10.000 metres below. A million stars and the silver disc of the moon hung in the sky. The night faded and an orange glow hit the eastern horizon. The dunes, divided by black valleys, emerged in shades of purple. Suddenly a segment of sun set the earth on fire. The purple melted into reds and yellows and the blacks into shaded ochre. The desert gradually petered out, changing to sandy plains and barren grassland. At lunch time the DC 10 dodged between grey, equatorial Cumulonimbus clouds. I took a good schluck of red wine. Life was incredibly exciting.

Through the green jungle below little red paths criss crossed leading to forlorn villages. In Germany you can spit from one village to the next. As kids we used to play a game with my grandmother: you had to find a spot with a view where you could turn 360 degrees without seeing a house, a road or an electricity pole. It was just about impossible and she hardly ever had to hand out the first prize of a carob bar filled with nuts and honey, devoid of any preservatives. My gran believed in health food long before it became a national obsession.

I ate some pretzels enjoying the view. Looked like down there you could walk for weeks and turn in circles all the time without ever getting a glimpse of civilization.

Hours later there was grassland sprinkled with thorntrees and occasional signs of humanity appeared. A plume of red dust from a car on a dirt road. Remote farms in clusters of trees. The silvery ribbon of a dead straight highway. A tiny town in the middle of nowhere.

I didn’t really want to go to South Africa. What a rotten place – apartheid and all. I had nightmares right from the start. Whites killing blacks and vice versa. The committee of the Rotary Exchange Programme did not give me any choice. Victoria Bay in South Africa or nothing. My friends said: how can you go to a country where they’ve never heard of human rights? Hell, I felt guilty. In the end I just shut up. If they wanted to stay in old, sclerosed Europe where just about everything was predictable and cast in rigid laws, that was their problem. I was more for seeing the world for myself and for adventures in far off places.

At dusk, the lights of a town etched the coastline of the Indian Ocean. Victoria Bay! I could hardly believe I had arrived. A short while later I stepped onto African soil! The air was humid and filled with unknown scents of vegetation. I nearly exploded with the feeling of adventure. I saw real African blacks. They were unloading the luggage from the plane.

A small crowd was waiting at the arrivals in the tiny airport building.

Who has come to fetch me? Maybe that fat couple with the 3 kids over there. I hope not. They look terrible…

I only knew my future host family’s surname.

I grabbed my rucksack and my sea bag from the luggage carousel.

A thin elderly man with a lot of grey hair and a melancholic smile asked: “Are you Mathilda Lindner?”

Hm, they sent the grandfather.

“Welcome to V.B. My name is Hannes Wieffering.” He pointed to a robust grey haired lady. “Meet my wife Marieke. We’ll be your host parents for the next couple of weeks.” Marieke planted a kiss on my lips.

Yuk, what the hell does that mean?

”You must be tired and hungry, my girl. We’ll have some lekker boerekos when we get home.”

I grinned at her, waiting for an opportunity to wipe my mouth without her seeing it.

At the car Hannes held the passenger door open for Marieke and one of the back doors for me. After he had made sure that ‘the ladies’ were comfortably seated, he loaded my luggage in the boot as if I couldn’t have done that myself. I was astounded. We were living in the 20th century after all. Hadn’t those old fashioned gentlemanly manners died out during the last century? I tried to keep an open mind about it.

The town sprawled out on several hills around a huge bay. Hannes said there were some uninhabited islands in the bay, but one couldn’t see them in the dark. The lights of a big ship blinked far out in the ocean and more and more stars appeared in the sky. Tall palm trees lined the street we took along the beach. White foamy waves washed up on the sand. Across the road, blocks of flats sat like a row of fossilized dinosaurs.

Weird to drive on the ‘wrong’ side of the
road.

A bank of clouds reflected the bright lights of the harbour. The CBD was deserted. I felt like in a dream. In my mind I had visited Victoria Bay lots of times already. A place made up of some photos I’d seen in brochures and a short paragraph in an encyclopaedia. V.B. wasn’t famous for anything, except that in the 1920s man had finally managed to build a harbour in the bay, a project that ‘was greatly hampered by the turbulence of the sea’. There was a bit of tourism and some industry and a hinterland of bush, dairy and chicory farms and mountains.

We went up a hill with houses in big gardens, came past a golf course and finally turned into a cobbled driveway. It was all quite different to what I had imagined. When I got out of the car gusts of wind made the trees rattle and a big Labrador licked my hand. In my mind travels I had never been aware of my body but now I was glad to arrive. I badly needed a toilet.

That night I slept in a white room with garlands of pink flowers on the wallpaper and a matching bedspread. On the dressing table were some southern hemisphere flowers in a blue vase. On one wall hung a painting of a herd of elephants in front of some orangey mountains. On the night table was a jug of water covered with a beaded cloth to keep the insects out, an upturned glass and a bible. I exploded in a burst of giggles. I was lying in a real young lady’s bed! In Germany I had painted my room in the flashy colours of the disc cover of Hair, and I slept on a mattress on the floor, like most people, who aren’t completely brainwashed by the advertising Mafiosos. I snuggled up under the young lady’s blanket and loved the idea to wake up in this foreign room the next morning. To plunge into a different universe was part of the adventure. It was August 1975 and I had a whole year of discovery ahead of me. Judging by this first day, it would be colossally exciting.