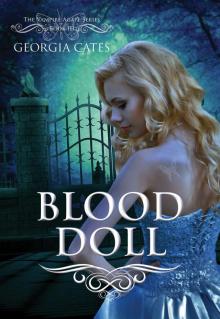 Avery Ferrand is surrounded by twelve armed vampiric guards when she’s escorted into the room where at least one hundred vampires are unaware they’re gathered in her honor. They silence as she enters and their full attention becomes fixed upon the only human in the room–the blood jewel–as she is led to her seat. It looks much like a royal throne for a king or queen so it gives the illusion that she’s treated with high regard. But I know better.

I’m unable to see her face from where I’m standing in the crowd but I have a unobstructed view of the pale skin exposed at the top of her strapless blood red ball gown. Her severe pallor is evidence that Vincent has shown no mercy in draining her for tonight’s blood jewel ceremony and I’m sickened. I think of what that must have been like for her and I want to inflict a long and painful death upon her captor. It would give me great pleasure to watch him scorch during a slow sunrise before meeting his final death.

I’m enjoying the scene playing out in my head as the bastard lifts his vial and instructs the entire room of vampires to ingest the substance that will transform them into his minions. They are killers–just as I once was–but none of them deserve to have this addiction unknowingly forced upon them. “Now, let us all partake of the precious blood jewel together. ”

I lift the vial to my lips as part of the deception and I’m unable to stop myself from sniffing the blood contained inside before I pretend to consume it. I’m surprised to discover it doesn’t have an essence at all. I’ve never known human blood to lack scent. I suppose it’s a characteristic specific to only a blood jewel so she isn’t so easily revealed among the vampire population. Perhaps it’s a trait given by Anteros to enable her a better chance at survival.

A fledgling walks through collecting the empty vials on a silver platter–a show of how no expense was spared–and I’m relieved when I’m able to rid myself of the evidence of my deception. I hear the voices around me murmuring about the exceptional taste of Avery’s blood and I begin to worry that this large group of vampires might break into a frenzy to get to Jenn’s sister. There will be nothing Curry or I can do if that happens.

I listen for the sound of her mundane heart and I’m surprised when I realize it isn’t pounding as one would expect. How strange. It’s calm for a human sitting before one hundred vampires that just consumed her addicting blood. At the very least I would expect a fast, thready beat due to her recent loss of blood volume. But it isn’t. I’m guessing it’s another Anteros given mode of survival.

The crowd in front of me shifts and I dart from side to side until I’m able to get a look at Avery Ferrand for the first time. She’s staring blankly into the crowd but turns her head–almost as if I called her name–and makes eye contact with me. I want to look away. But I can’t. She is the most beautiful woman I’ve ever seen.

Her heart speeds as our eyes remain locked. I can’t bring myself to blink because I’m too mesmerized by her beauty but then I realize that whatever I’m feeling toward her must be part of the blood jewel attraction. I didn’t consume her blood so what little is left of it must be calling out to me like a siren summoning her victim to his doom.

I feel a harsh jab into my side so I fight the urge to continue staring at the beauty in front of me. I’m barely a victor over the strange desire I feel but I manage to turn to Curry. “What?”

“Our host is calling you so why don’t you go see what he wants. ” Curry’s words are slow and deliberate as he gives me a look I can only interpret as a warning to be careful.

“Oh, sure, sure. ” My words stumble. I’m embarrassed Curry has seen how easily I’m enraptured by the blood jewel. It’s a sign of weakness–something I don’t care to fall victim to.

I’m cautious as I approach Vincent where he is sitting on the armrest of Avery’s throne. I want to look at her again–and my eyes beg permission–but I don’t grant it. I fear any attention directed toward this lunatic’s most prized possession could cause an unwelcome riff.

An evil grin appears on Vincent’s face as he reaches out to stroke Avery’s cheek and it takes every ounce of strength I have to not rip his arm from its socket. “I couldn’t help but notice your special interest in my sweet, sweet Avery. ”

Shit. He’s already noticed the attention I gave her so I don’t dare make the mistake of looking directly at her again. He drops his hand from her face and watches me. “Did you enjoy her blood?”

I’m in a shitload of trouble if he asks for specifics so I rack my brain to remember some of the comments murmured by those around me after they drank her blood.

Damn! I draw a total blank because I was too preoccupied with seeing her for the first time. “I did. It was mesmerizing just as you said. ”

“I know it was everything I promised it would be and more, but what did you think of it?”

He’s pressing me. But why? Does he suspect I didn’t drink her blood?

I look from Vincent to Avery against my better judgement. She peers up at me through her long lashes and I confirm the beautiful color of her eyes for the first time. They’re the most unusual color of golden brown–a shade I can’t recall ever seeing in all of my years–but they’re a perfect pairing with her long blond curls. “She is perfection like nothing I’ve ever known before. ”

“Her blood used to be better, if you can believe that. ” There’s no misinterpreting the disgust in his voice and I have the urge to defend her against his verbal assault.

“I can’t imagine it being better. ” Nor can I imagine wanting her more than in this moment so I force my eyes from hers because I’m ashamed. I shouldn’t want her.

“My sweet Avery has become desensitized by us. We no longer frighten her so she doesn’t produce the adrenalin high she once did. As you can imagine, I want to get that sensational high back again. I’ve tried everything but I can’t seem to achieve it anymore. ”

Jenn told us the tactics he used on her and Avery to achieve a higher saturation of adrenalin in their blood so I’m not at all shocked by his admission. However, I am a little surprised by how much pleasure his dissatisfaction brings me and I struggle to fight the grin threatening to spread across my face. “I’m sorry, Vincent. I don’t understand what you mean. ”

“Phillip. ” I’m briefly caught off guard when he uses my alias. “I noticed the way you looked at my Avery. ” He places two fingers under her chin, lifts her face upward, and strokes her carotid. “You noticed too didn’t you my sweet angel?”

She makes no reply before she lowers her eyes. “Don’t you smell her fear and hear her fluttering heart, Phillip? It’s been months since this happened. She might as well have been dead to the world until she saw you in the crowd and then her pathetic little human heart began to race. Now, adrenalin is coursing in her blood and seeping from her skin. Isn’t it magnificent?”

I knew the scent of adrenalin well but that was not the fragrance tickling my sense of smell. It was something entirely new and different. And I liked it a lot more than I should. “She is a splendid creature and you are very lucky to have such a rare commodity. ”

“Come closer to her, Phillip. ” Why does he continue saying my alias and where is he going with this? It can’t be good wherever it is.

I’m cautious again as I take a single step toward her and stop. I don’t want to make any aggressive moves that could trigger one–or all–of her guards to charge me. When Vincent sees that I have no intention of coming closer, he motions with his hand. “Closer, I want you to touch her, Phillip. ”

Is he setting me up? Is it his plan to have the guards attack me? Perhaps as an example of what not to do with
his property? “Okay, this is getting a little too weird. ”

Vincent rises from the armrest and there’s venom seething in his voice. “I said for you to touch her and you are a guest in my home so please show some respect for your generous host that shared her blood with you tonight. ”

I’m furious as I move closer to Avery but then I look at her and all of my anger dissipates the moment I press the back of my hand to her face and slowly stroke her soft cheek. Human touch. It’s something I haven’t felt in decades and I bask in the feel of her warm skin against my cool hand. But that isn’t what feels so amazing. It’s the nearly electrical-like current I feel creeping beneath my skin. It’s almost as if the point where I stop and she begins no longer exists.

It’s easy to imagine us as the only two people in the room–maybe even the earth–but then Vincent ruins the moment when he opens his mouth. “It is glorious what your touch does to her. ”

He finds pleasure in this girl’s fear. That’s when I decipher what I’m doing to Avery and why he made me touch her. I’m unintentionally terrorizing her because she doesn’t understand that I’m here to save her and not join in with these sick bastards. “I’m glad you are pleased. ” I turn to walk away–attempting to hide my disgust–but he isn’t finished with me.

“Stop, we’re not done here. ” I cringe inwardly before I turn back because I don’t know what to expect next from this psychopath. “You’ve accomplished what no one else could and I need to reward you for your achievement. ”

I don’t want to know what constitutes his idea of contribution. “I need no reward. ”

Vincent motions again for my return while stretching out his words in a threatening tone. “Phillip … come … back. ”

I want no part of this game he’s playing but I don’t have a choice if I wish to maintain my cover so I return to stand before him. “I have just one more request. ” It comes out as a whisper and his tone is even more devious when he lowers his voice.