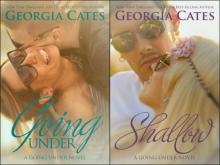 Why the hell was I driving to Collinsville to watch Dane Wickam race? And better yet, how had I let him talk me into making a two-hundred dollar bet that he would win? I didn’t know jack about racing and if I had to guess, Dane didn’t either. Sure, his parents bought him a fast, new Porsche for graduation, but that didn’t mean he knew how to race it.

I stopped at a red light just before we entered Collinsville, Jessie’s old stomping ground, and looked up in my rearview mirror at him sitting in my backseat. “Hey, Jessie, do you know this guy Dane is going to race?”

“Yeah, I went to school with Hawke at Collinsville. We were in the same class and I’ve helped him out with his car before. ”

“Hawke?” I laughed and the only thing I could picture was some guy with a big hooked nose like a bad cartoon. “What kind of name is Hawke? His mom is wrong for doing that to him. ”

“His name is Nick Hawke, but everyone calls him Hawke and the name suits him pretty well. He’s very well known for his predatory nature. ”

I watched Jessie laughing in my mirror. “No, girls are his chosen prey. ”

Claire twisted around in her seat to look at Jessie. “That’s funny because I was under the impression that the Collinsville ladies’ man left when you came to East Franklin. ”

“No, Hawke was always the favorite among the chicks. They love his pretty face. I swear he can sweet talk himself into any girl’s pants, so I want you to keep your distance from him. I don’t want you falling for any of his Jedi sex tricks. ”

What tha’? I spun around to look at Jessie sitting in the backseat behind Claire. “Did you just say Jedi sex tricks?”

Somehow in the midst of spinning around to look at Jessie, I forgot I was the one in the driver’s seat and my foot accidentally slipped from the brake to the accelerator.

“Payton, look out!” Claire squealed just before I rammed into the back of the car stopped in front of us.

The whole thing happened in a split second. Shit. My parents were going to kill me. I didn’t have the best driving record ever, but at least I’d never gotten into an accident. So much for my clean accident-free driving history.

Jessie leaned toward me in the driver’s seat. “Yes, I said Jedi sex tricks. ”

“Shut up,” I barked as I looked at the car in front of us to assess the damage but I couldn’t tell anything from inside the car. I watched the driver sling his door open and get out to look at the back of his car before he turned and stared at me with narrowed eyes.

Oh. My. Gosh. I just mated my Lexus with a P. O. S. Camaro being driven by quite possibly the hottest guy I’d ever seen. The problem other than the obvious? He was pissed about it, like really pissed, and he was staring at me like he could strangle me.

“Umm, I don’t think you should get out of the car. He looks really mad. Maybe we should just call in the accident and wait on the police to come,” Claire suggested.

“Nah, I’ve got this. ” Jessie opened the door and was out of my car before Claire could object. He was Claire’s knight in shining armor and because I was the bestie without a boyfriend, he took it upon himself to be my protector as well. That was just Jessie.

I cracked my window as he walked by. “Hey, Kimosabe, do you think you can manage to not take a gunshot wound or knife to the gut? You know you don’t have a really great track record with confrontation. ”

Without looking back, he flipped me off over his shoulder and I looked at Claire. “You really need to teach your boyfriend some manners. ”

She rolled her eyes as she shook her head. “Apparently I’m not very successful at that. I haven’t managed to teach you any over the years. ”

“I have manners, but you know my motto. Why be difficult, when with only a little bit of effort, you can be impossible?”

Claire shifted uncomfortably in her seat as she watched Jessie talking to the guy I just hit. I couldn’t tell anything by the expression on his face as he put his hands on his hips and turned back to look at me in the car. “There are a lot of other things you could excel at besides being a smart ass. ”

“I'm sorry you find my normal behavior to be so highly inappropriate, Princess. ”

“Nope, you know that you don’t get to call me that. Jessie is the only one with that privilege. ”

Jessie turned from talking with ‘hot guy I just slammed into’ and walked around to Claire’s side of the car. She rolled down her window and Jessie leaned in with his arms resting on top of my car as he looked at Claire. “Warning. This is going to go over like a turd in the punchbowl. ”

I leaned around Claire to see Jessie because that clearly meant I was about to be pissed about something. “What’s that supposed to mean?”

“He says that he won’t sue if you’ll go out with him. ” He was laughing and Claire punched him with her hand as she mouthed, “Stop. ”

I looked at Jessie and waited for the punchline. “You need to stop trying to be a clown, Bro, because there’s no circus in town. ”

He held his hands up like he was an innocent party, but he was still laughing. “That’s what he said. Don’t shoot the messenger. ”

“Oh, hell to the naw,” I announced as I waved my hand back and forth. Now it was me slinging my car door open. “I only need a minute to take care of this. ”

“Calm down and play nice, Payton. Keep in mind that you just ran into the back of his car,” Claire graciously reminded me.

“I don’t play nice when I’m given ultimatums. ” I slammed my car door shut and straightened my short skirt before I walked toward Mr. Prince of Nothing Charming in my four inch wedge heels. This was going to be the most fun I’d have all night so I planned to take advantage.

Damn. The closer I got, the more I realized how great looking this jack off was and frankly it was a little unnerving. His hair was dark and longer than I liked, but it suited him so perfectly the way the untamed tendrils curled and stuck to the perspiration along his forehead. He reached to shove a lock out of his face and his dark chocolate brown eyes pierced mine through his long sooty lashes as though he saw straight through to my soul.

His shoulders were broad, just the way I like them and his black T-shirt fit his chest tightly so I was able to see how well defined his chest was beneath it. I could tell he worked out. A lot.

He caught me looking and my own heart betrayed me as it began to race without my permission. My breath was held hostage in the back of my throat as my eyes moved from his chest up to his face and I wondered what his semi-scruffy chin would feel like against my throat as it slid lower.

Hey, Self! Stop having a lady boner moment! This guy is trying to coerce you into a date by the means of a threat. Don’t crack just because he’s eye candy.

I stood in front of him with my arms folded and waited for him to say the first word, but he didn’t. Good thing I didn’t mind speaking up. “So, I have to go out with you if I don’t want to get sued, huh? Are you kiddin’ me, dude? That’s called blackmail and it’s illegal. ”

He gave me a big lopsided seductive grin and I was certain it wasn’t the first time he had used it to get what he wanted. “Some might call it extortion, but I think a date would be adequate compensation for any damage that may have occurred. ”

I turned to look at the back of his car and saw that neither of our vehicles had suffered any damage during my unfortunate Jedi sex trick mishap. I could have argued that there was nothing to be compensated for, but I felt like having a little fun with this guy. “Do you have something I could
use to write my contact information on?”

His lopsided grin oozed with satisfaction and turned up on both sides to reveal two of the cutest dimples I had ever seen. He reached into his pocket and pulled out his cell. “Don’t need it. I’ll put you in my phone,” he said as he stood there waiting to hear my digits.

He was going to add me in his cell phone, today’s version of the Little Black Book. He didn’t see the smirk on my face because he was busy looking at his phone while I called off, “5-5-5-3-9-8-5. Vivian Archer, Attorney at Law. She’s my mother and your attorney may contact her so they may discuss the conditions of your claim against me. ”

Okay, that was a little bit of a lie. My mother had not practiced law in years, but he didn’t have to know that. His sexy little grin faded and mine spread bigger. “Now, if you’ll excuse me, I have money riding on a race and I’d like to be there to collect my winnings. ”

That lopsided grin made a reappearance. “A race, huh? I heard about that. I hope you bet on Hawke instead of that spoiled rich kid from East Franklin or you can expect to kiss your money good-bye. ”

So, he was a ‘know it all’ also. “As a matter of fact, I did not bet on anyone named after a bird. My money is riding on the brand new Porsche. ”

In his fitted black T-shirt and dark washed jeans, he stepped back and leaned against his old black Camaro. He crossed his arms and I suspected he did so to call attention to his muscular, tanned biceps. Mission accomplished.

“You placed a bet on a car with no consideration for the driver? That’s known as bad betting, Doll Face. I hope you didn’t wager a lot of money because you are going to lose. ”

I shifted my weight to one leg and kept my arms crossed over my chest. “I have two Benjamins on the Porsche that is going to win. ”

He let out a high pitched whistle. “Wow, you seem very confident in your car, so how would you feel about upping your ante since you’re so positive the Porsche will leave Hawke in the dust?”

I wish I could, but I didn’t have cash on me and I doubted this jerk took credit. “Sorry, no can do unless I can swipe my Visa up your ass crack. ”

He grinned and laughed. “Wow, I didn’t expect anything like that to come out of a beautiful little delicate mouth of yours. ”