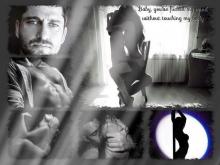 I feel guilty for taking a mind-altering drug so I can deal with the feelings I'm having about leaving Jack Henry—especially after everything I went through with my mom's addiction. But I need an escape from the torment in my head. It's a temporary fix—I knew that when I took it—and I have no idea how I'll cope with my feelings once I'm home without the effects of the medication to help me.

It kills me to admit it, but I think I might understand how my mom's addiction started. I see how the path might be an easy one to follow when all you can see is darkness. This is a huge red flag for me. I'll love Jack Henry until I draw my last breath, but I won't allow myself to walk the same path as my mother—no matter how tempting.

Our grueling flight from Sydney lands at LAX and I immediately notice the distinct smell of Los Angeles—fuel and smog—when our jet bridge attaches. It's the same odor that caught my attention when we connected here with our flight to Australia three months earlier. Wow. That was such a different time in my life.

We fight our way out of the crowded terminal and find Addison's parents waiting for us at baggage claim. She's going home for two weeks to spend time with them before she comes back to Nashville. This means I'll be alone in our apartment for the next fourteen days. I'm not so sure that's a good thing.

The Donavons welcome their daughter with open arms—and me too. They love me like a daughter and I think about how perfect it could've been if I'd fallen in love with their son instead of a man who never wants to see me again. My relationship with Ben could've gone much differently. Who knows what might have happened between us had I not stumbled upon Jack Henry McLachlan in that bathroom hallway? But I did, and it isn't possible for me to be sorry about it. To regret meeting the man I love would be to wish him away, and I can never do that. The excruciating pain I feel in my heart is worth even the briefest time we had together.

Addison looks at me like we'll never see one another again. "I really wish you'd come with me. I hate to see you go home like this. "

"I'll be fine, Addie. " She has no idea how experienced I am with finding ways to cope when life has treated me a little too cruelly. "My mom would be really disappointed if I didn't come home today. "

"Yeah…but promise me you won't spend the next two weeks sitting in the apartment thinking about him. "

"I promise I'm not going to do that," I lie. I fake a smile to reassure her. "I'm jumping head first into my music as soon as I'm back. It'll be a good distraction. "

"You know I don't believe you. " She's wearing that look I hate so much. Pity. Grrr.

"I'm not breakable, Addie. I'm a tough cookie. Yes, I'm sad about leaving him but I'll get over it. It's not the end of the world. " Lie. Lie. Lie. There's something wrong with me. I can't even tell my best friend how shattered I am. Why am I not able to let anyone in? Except Jack Henry…he's the only one in this world who has broken through, who knows the real me.

"We'll talk every day while I'm gone. " She squeezes me tightly as we say goodbye and whispers in my ear, "I'll need to know you're okay. "

I hate the way she makes me sound—like I'm self-destructive. It pisses me off. "Shit, Addie! My life isn't over because I'm not with him. Yes, I'm going to miss Lachlan. " I wish I didn't have to call him that with her. "Missing him is okay—it's normal—but it doesn't mean I'm gonna lie down and die. " The words sound really good coming out of my mouth. I wish they were true.

She's smiling. I think that means she's pleased by my feisty retort but she doesn't realize she's poking an unstable beast with her invisible stick. "Good. That's exactly what I needed to hear from you. "

"I just needed to know post-Lachlan Laurelyn isn't going to be like post-Blake Laurelyn. "

Psst. Post-Blake Laurelyn has nothing on post-Jack Henry Laurelyn but I can't let her know that so I'll have to get my shit together before she comes back to Nashville. "No worries, Addie. "

"I feel marginally better about letting you go home alone now, but I meant what I said about talking every day. "

She looks relieved. Did she really buy what I'm selling? Damn, I'm better at this than I thought.

When we part ways, I'm left by myself. Again. Like always.

While waiting in the terminal, I decide to check in. "Hey, Mom. "

"Hey, baby girl. " Something about those words always puts me at ease.

"I just wanted to let you know we made it fine. I'll be boarding for Nashville in about an hour, so I'll need you to pick me up around one. "

"I'll be there. I can't wait to see you and hear everything about your trip. " Dammit! Am I going to admit that I went to Australia and fell in love with a man I'll never see again?

"I can't wait to see you, either. " I don't think I have a choice. Every moment of my three months in Australia practically revolved around Jack Henry. I won't have much to share if I don't tell her about us. "We have a lot to talk about, Mom. "

"I have things to tell you too. " Uh-oh. That statement could only precede what my mom thinks of as good news. I really don't need more shit at this point in my life and I'm positive I don't want to hear about whatever it is before I board this flight. "Okay. You can surprise me after I'm home. "

I end the call and my mind immediately spins with all the things she might tell me. She sounded really happy. It's gonna be something about him. I know it is, without a doubt. She was too giddy for it to be anything else.

For the first time in my life, I'm not pissed off at her for being so in love with him. I understand it now—how she can still be so consumed by him after all these years. Is that what I can expect the rest of my life to be like? I'll never forget the love I have for Jack Henry. Never.

My mom has been forced to look at me—the child she shares with the man she loves—almost every day for twenty-three years. I make it impossible for her to forget him, especially since I'm his mini-me all the way down to his brown hair and light brown eyes. Not an ounce of my mom's blond and green.

Maybe living without Jack Henry won't be as bad for me since I won't have his child as a daily reminder of what we once had. The thought reminds me of what he told me the first time we talked about birth control. I don't want you leaving here with my ankle-biter in your belly. That night feels like a million years ago.

He doesn't think so now—because he's trying to be selfless—but one day he'll marry another woman and give her his children. Margaret will see to it. I'm certain of it. And the thought breaks my heart because I want to be the one to have his babies.

Oh, shit—my birth control pills. I remember taking them out of the nightstand drawer. Did I leave them on the bed? I was so distracted throwing things into suitcases before Jack Henry could come home for a lunchtime romp. Stupid, you told yourself to not forget them and you did anyway.

There's nothing I can do about it now. I'll run by the pharmacy as soon as I get home. I'll be two days behind by the time I'm able to get my hands on another pack. Taking more than one at a time is gonna make me feel blah—that extra dose of hormones always does that to me—but it should at least keep me from being pregnant. Maybe.

I look at my phone in my hand and I can't help myself—I have to see his face now that I don't have Addison interpreting my every move. I look at the first picture I ever took of Jack Henry. It's the one where he's driving us to Avalon, the top down on the convertible after we went into town for condom shopping. I giggle aloud as I remember my shock at seeing how many he bought. I look around the terminal to see if anyone is looking at me like I'm craz
y. I don't care—maybe I am a little on the mental side. If I'm not today, I have a feeling I will be before much longer.

I disembark in Nashville and see the top of my mom's blond head in the distance. She's tall so she's easy to spot and I'm relieved to see she's alone. I almost expected her to have him with her, although deep down, I knew it was an unrealistic possibility.

She wraps me in her arms and I realize I need her in a way I never have before. I long to tell her everything about Jack Henry. I want her to reassure me that it's all going to be okay. Even if it's a lie, I'm desperate for her to tell me I'll go on and one day be fine without him.

"Mmm," she groans as she squeezes tightly. "I'm happy to have my girl back. "

She steps back but holds on to my hands, stretching my arms to study me. "You look different, Laurie. "

She has no idea how different I am from the girl she saw three months ago. "I'm tanned. "

"And I can't wait to hear all about it. How about a late lunch? You can tell me everything. "

She takes me to my favorite Mexican restaurant and my mouth begins to water when I smell the spicy aroma coming from the kitchen. It's a hole in the wall but the food is authentic. I've missed it. Since it's midafternoon, they're not busy and we take our usual booth in the corner. "Laurie, I have some wonderful news. "

I guess that means she's going first and what I have to say about Australia and Jack Henry will wait until she's finished. "Okay. I'm listening. "

"It's about me and your dad. " She looks ecstatic so I'm guessing he's given her some sort of attention or sign of affection. If that's what this is about, she's pathetic. And I'm following right in her footsteps. "You know he came to see me while you were in Australia…"

Beauty from Surrender by Georgia Cates / Romance & Love have rating 4.1 out of 5 / Based on90 votes