Home » Gena Showalter » Through the Zombie Glass
←Home
Through the zombie glass, p.1

Through the Zombie Glass, p.1 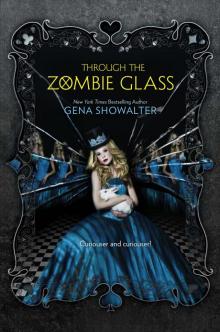 Begin at the Beginning

More and more I’d been dreaming about the crash that killed my parents and younger sister. I relived the moments as our car flipped end over end. The sounds of metal crunching into pavement. The stillness when everything was over, and I was the only one awake. . . maybe the only one alive.

I’d struggled to free myself from the seat belt, desperate to help little Emma. Her head had been twisted at such an odd angle. My mother’s cheek had been slashed open like a Christmas ham, and my father’s body had been thrown out of the car. Panic had made me stupid, and I’d hit my head on a sharp piece of metal. Darkness had swallowed me whole.

But in my dreams, I watched my mother blink open her eyes. She was disoriented at first, moaning in pain and trying to make sense of the chaos around her.

Unlike me, she had no problem with her seat belt, freeing herself and turning, her gaze landing on Emma. Tears began to rain down her cheeks.

She looked at me and gasped, reaching out to place a trembling hand on my leg. A river of warmth seemed to rush through me, strengthening me.

Panting, my body dotted with perspiration, I scanned my surroundings. I saw walls of ivory and gold, painted in swirling patterns. An antique dresser. A furry white rug on the floor. A mahogany nightstand, with a Tiffany lamp perched next to a photo of my boyfriend, Cole.

I was in my new bedroom, safe.

My heart slammed against my ribs as though trying to burst free. I forced the dream to the back of my mind and moved to the edge of the bed to peer out the large bay window and find a sense of calm. Despite the gorgeousness of the view—a garden teeming with bright, lush flowers that somehow thrived in the cool October weather—my stomach twisted. Night was in full bloom, and so were the creepies.

Fog that had brewed on the horizon for hours had finally spilled over, gliding closer and closer to my window. The moon was round and full, set ablaze with orange and red, as if the surface had been wounded and was bleeding.

Zombies were out tonight.

My friends were out there, too, fighting the creatures without me. I hated myself for falling asleep at such a critical time. What if a slayer needed my help? Called me?

Who was I kidding? No one would call, no matter how badly I was needed.

I stood and paced the room, cursing the injuries that kept me tucked inside. So I’d been sliced from hip to hip a few weeks ago. So what? My stitches had been removed and the flesh was already scarring.

Maybe I should just arm up and head out. I’d rather save someone I love and risk another life-threatening injury than do nothing and stay out of harm’s way. But. . . I didn’t know where the group had gone, and more than that, if I did manage to track them down, Cole would freak. He would be distracted.

Dang it. I would do as I’d been told and wait.

Minutes stretched into hours as I continued to pace, a sense of unease growing sharper with every second that passed. Would everyone come back alive? We’d lost two slayers in the past month alone. None of us were prepared to lose another.

The hinges on my door squeaked.

Cole slipped inside the room and threw the lock, ensuring that no one would bust in on us. Relief plucked the claws right out of the unease, and I thrilled.

He was here. He was okay.

His gaze landed on me, and I shivered, waiting for a vision. . . hoping for one.

Since the day we’d met, we’d experienced a small glimpse of the future the first time our eyes locked on any given day. We’d seen ourselves making out, fighting zombies and even relaxing in a swing. Today, like almost every day since my stabbing, I experienced nothing but crushing disappointment.

Why had the visions stopped?

Deep down, I suspected one of us had built up some sort of emotional wall—and I knew it hadn’t been me.

I was too entranced by him.

Always he threw off enough testosterone to draw the notice of every girl within a ten-mile radius. Though he was only seventeen years old, he seemed far older. He had major experience on the battlefield, had fought in the human/zombie war since he could walk. He had experience with girls, too. Maybe too much experience. He knew just what to say. . . how to touch. . . and we melted. I’d never met anyone like him. I doubted I ever would again.

He wore all black, like a phantom of the night. Inky hair stuck out in spikes, with leaves and twigs intertwined in the strands. He hadn’t bothered to clean his face, so his cheeks were streaked with black paint, dirt and blood.

Violet eyes almost otherworldly in their purity shuttered, becoming unreadable, even as his lips compressed into a hard, anguished line. I knew him, and knew this was his let’s-just-burn-the-world-to-the-ground-and-call-it-good face.

“What are you doing out of bed, Ali?”

I ignored the question as well as the harshness of his tone, understanding that both sprang from a place of deep concern for me. “What’s wrong?” I asked. “What happened out there?”

Silent, he disarmed, dropping daggers, guns, magazines of ammo and his personal favorite, a crossbow. He’d come to me first, I realized, not even bothering to stop at his house.

“Were you bitten?” I asked. Suffering? Zombie bites left a burning toxin behind. Yes, we had an antidote, but the human body could take only so much before it broke down.

“I saw Haun,” he finally responded.

Oh, no. “Cole, I’m so sorry. ” A while back, Haun had been killed by zombies. The fact that Cole had seen him again meant only one thing. Haun had risen from his grave as the enemy.

“I suspected it would happen, but I wasn’t ready for the reality of it. ” Cole’s shirt was the next to go.

The blade-sharp cut of his body always stole my breath, and now was no exception, regardless of the horror of our conversation. I drank him in—the delightfully wicked nipple ring, the sinewy chest and washboard abs covered with a plethora of tattoos. Every design, every word, meant something to him, from the names of the friends he’d lost in the war to the depiction of the grim reaper’s scythe. Because that was what he was. A zombie killer.

He was total bad boy—the dangerous guy monsters feared finding in their closets.

And he was closing the distance between us. I buzzed with anticipation, expecting him to draw me into his arms. Instead, he bypassed me to fall onto the bed and cover his face with scabbed hands.

“I ashed him tonight. Ended him forever. ”

“I’m so sorry. ” I eased beside him and brushed my fingers over his thigh, offering what comfort I could. I knew he understood that he hadn’t actually ashed Haun, or even the ghost of Haun. The creature he’d fought hadn’t had Haun’s memories or his personality. It had had his face and nothing more. His body had simply been a shell for unending hunger and malevolence.

“You had to do it,” I added. “If you’d let him go, he would have come back for you and our friends, and he would have done his best to destroy us. ”

“I know, but that doesn’t make it any easier. ” He released a shuddering sigh.

I looked him over more intently. He had angry cuts on his arms, chest and stomach. Zombies were spirits, the source of life—or afterlife in their case—and had to be fought by other spirits. That was why, to engage, we had to force ours out of our bodies, like a hand being pulled out of glove. An
d yet, even though we left our bodies behind, frozen in place, the two were still connected. Whatever injury one received, the other received, as well.

I padded to the bathroom, wet several washrags and grabbed a tube of antibiotic cream.

“Tomorrow I start training again,” I said as I tended him, distracting us both.

He glared up at me through lashes so thick and black he looked as if he wore eyeliner. “Tomorrow’s Halloween. All of us have the day and night off. And by the way, I’m taking you to a costume party at the club. I’m thinking we’ll stick with the whole battered and bruised theme and go as a naughty nurse and even naughtier patient. ”

My first outing in weeks would be a date with Cole. Yes, please. “I think you’ll make a very sexy naughty nurse. ”

Don’t laugh. “Promises, promises. ” I tsked, then tried to continue more seriously. “But I never mentioned hunting. ” Too many people would be out, and some would be dressed as zombies. At first glance, we might not be able to tell the real deal from the fake. “I only mentioned training. You are working out tomorrow morning, aren’t you?” He always did.

He ignored my question, saying, “You’re not ready. ”

“No, you’re not ready for me to be ready, but it’s happening whether you like it or not. ”

He scowled at me, dark and dangerous. “Is that so?”

“Yes. ” Not many people stood up to Cole Holland. Everyone at our school considered him a full-blown predator, more animal than human. Feral. Dangerous.

Cole wouldn’t hesitate to tear into someone—anyone—for the slightest offense. Except me. I could do what I wanted, say what I wanted, and he was charmed. Even when he was scowling. And it was strange, definitely something I wasn’t used to—having power over someone else—but I’d be lying if I claimed not to like it.

“Two problems with your plan,” he said. “One, you don’t have a key to the gym. And two, there’s a good chance your instructor will suddenly become unreachable. ”

Since he was my instructor, I took his words as the gentle threat they were and sighed.

When I’d first joined his group, he’d thrown me into the thick of battle without hesitation. I think he’d trusted his ability to protect me from any kind of threat more than he’d trusted my skills.

Through the Zombie Glass by Gena Showalter / Young Adult / Horror have rating 4.2 out of 5 / Based on38 votes