The Worlds of Joe Shannon, Page 1 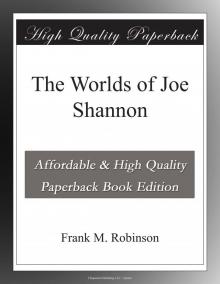 Produced by Greg Weeks and the Online DistributedProofreading Team at https://www.pgdp.net

This etext was produced from IF Worlds of Science Fiction March 1954. Extensive research did not uncover any evidence that the U.S. copyright on this publication was renewed.

_Strumming a harp while floating on a white cloud might be Paradise for some people, but it would bore others stiff. Given an unlimited chance to choose your ideal world, what would you specify--palaces or log cabins?_

THE WORLDS of Joe Shannon

I'll take beer, son, and thanks again for the offer. As you can see,I'm kinda down on my luck. I know what you're thinking, but I'm notreally on the bum. I usually make out all right--nothing fancy, mindyou, but it's a living. Odd jobs in the winter and spring, follow theharvests in the summer and fall. Things are slack right now.

You? Electronics, huh? Used to know a fellow in electronics....

His name was Joe Shannon, used to work for Stellar Electric up inFremont. Young fellow, not more'n twenty-five or so. Rail thin, wispyhair, serious look--you know, the one suit, absent-minded type. Joewas a brain. A triple-A, gold-plated, genuine genius. Had a wife namedMarge. Not beautiful but pretty and a nice figure and a cook you neversaw the likes of. Like I say, she was married to Joe but Joe wasmarried to his work and after you'd been around a while, you couldtell there was friction.

But that ain't the beginning.

I suppose I'm partly responsible because it started when I was overfor dinner one night. I had been working in the garden and doing oddjobs around the house that afternoon and I finagled it so I wasinvited for supper. Marge Shannon made chili that I just couldn't stayaway from. Thick with beans and meat and easy on the spices so itwouldn't burn an old man's stomach.

Joe and I had just gone into the living room--Marge stayed in thekitchen to do the dishes--and I was feeling stuffed and kinda sleepy.All of a sudden Joe says out of a clear blue sky: "Harry, this is ahell of a world we live in, isn't it?"

Now Joe had never struck me as being the unhappy type. He loved hiswork, he loved his wife (and just about in that order), and so far asI knew he didn't owe any money. So I tried to feel him out, to findout where the rub was.

"There's nothing wrong with the world, Joe," I says. "It's just thepeople in it."

He started methodically filling his pipe and tamping down the tobaccoand not saying a word and I get the feeling that he's deadly seriousabout something.

"You're right," he says quietly. "It isn't the world, it's thepeople."

I sit there feeling puzzled but a lot less sleepy and finally I ask:"Anything wrong, Joe?"

He lights his pipe and settles back in the big, overstuffed easy chairwith the flowered slip-cover that Marge made, still frowning. "It's anunhappy world," he repeats.

"It all depends on what side of the picture you want to look at," Isays, trying to cheer him up. "Maybe you been reading too manynewspaper headlines."

Now, son, there's a million things that make people unhappy. Givenhalf the night, I could maybe list a couple of hundred. But to narrowit down to one or two, I couldn't do it. So I just shook my head andlet Joe carry the ball.

"It's a complex world, Harry. A lot of people never adjust to it. Someof them turn the tables and try to adjust the world to them, whichmakes a lot of other people unhappy. No, I'd say there's a certainnumber of people who just don't fit in this world of ours. Maybe at adifferent time and on another world, they might fit. But they don'tfit on this one, not right here and now."

That was a way of looking at it that I had never thought of before.And Joe had a point. Now you take old Barney Muhlenberg, the towndrunk. I knew Barney when he was a boy, and a more sober,adventure-seeking young rascal you never saw. But by then all thefrontiers had dried up, it was between wars, and the only adventureBarney could find was in the bottom of a bottle. Barney was one ofthose poor folks born fifty years too late.

Or you take Miss Alice Markey, the history teacher at Fremont High.She's an old spinster--frail, white-haired, and a little bit crabbynow. You'd never believe it but she used to be the romantic type.Somehow, the right man just never came along, but she's never given uphoping either.

Sure, you wouldn't believe it to look at them. But that's how peopleare, down underneath. All dreams and wishful thinking.

It always seemed to me that you weren't going to help people byletting them fall asleep on a couch at fifty dollars a nap and tryingto convince them they should give up their dreams.

"You've got to give people something _positive_!" Joe says, hitting anend table with his fist so an ashtray jumps off.

I sat up and began to take notice. Once Joe had an idea, he usuallydid something about it.

"You got something in mind," I accused.

He stopped pacing and pointed his pipe at me like it was the workingend of a twenty-two rifle. "I got an idea, Harry," he says, the geniusshowing in his eyes like the dollar signs in a cash register. "I'mgoing to make a machine during my vacation and...."

And then Marge is in the doorway, dishtowel in her hand and littleanger spots in her cheeks. "Joseph Shannon!" she says, stamping herfoot. "You know perfectly well what we're going to do and where we'regoing to go on your vacation!"

Joe's mouth got set and I could see a storm blowing up so I struggledto my feet and got my hat. "That was awful nice chili, MissusShannon," I says, and it isn't much more than two seconds later whenI'm out the front door and walking up the sidewalk.

Well, Joe--stubborn Irishman that he was--stayed right in town duringhis vacation. He had a laboratory in the basement and every day when Iwent by I could hear him and Wally Claus, his assistant, working downthere, hammering and nailing and running electric motors that spatsparks and whined worse'n two alley cats fightin' in a fish market.

On the day that it's finished, Joe invites me over for dinner again.After the meal's over--and Joe's so anxious that he don't even tellMarge how nice the tuna fish casserole was--we go down into thebasement. Marge doesn't come along.

"What's the matter with Marge?" I ask. "Ain't she interested?"

Joe jams his hands in his pockets, scowls, and says: "We've beenhaving a little trouble, Harry. She doesn't see things my way."

It isn't any of my business so I clam up and walk over to where thewhole front half of the basement is curtained off with a couple of oldsheets and a drawstring.

"This is it," Joe says proudly, pulling on the drawstring. "Thegreatest invention since the wheel!"

Well, to tell you the truth, son, I was kinda disappointed. I hadexpected something big and shiny but what there was looked a littlelike a cross between a phone booth and one of those things in trainstations where you take your own photograph. I looked inside and all Icould see was a big screen in front, like on a television set, a coinslot, and a funny looking hat with a cable leading out of it.

"It's real nice," I says, not actually knowing whether it was or not."What is it?"

I took another look at the machine, and then looked at Joe. It occursto me that maybe he's been working too hard or that arguments withMarge have sorta unsettled him.

"Look, Harry," Joe says, "remember when we were talking about all thepeople who didn't fit in this world?"

"What if people could choose the type of world they wanted to livein?"

He fishes around for his pipe and lights up. "How big's the universe,Harry?"

"Most scientists say the universe is infinite," Joe explains. "And ifit's infinite, then it must have an infinite number of worlds in it.An actual world to match whatever kind of world you can