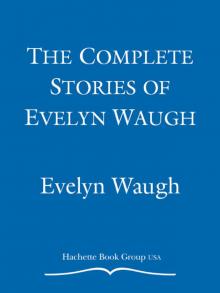 A Handful of Dust

Love among the Ruins

The End of the Battle

The Ordeal of Gilbert Pinfold

The Complete Stories of Evelyn Waugh

The Diaries of Evelyn Waugh

The Letters of Evelyn Waugh

They Were Still Dancing

When the Going Was Good

A Tourist in Africa

The Essays, Articles and Reviews of Evelyn Waugh

Copyright © 1998 by the Estate of Evelyn Waugh

All rights reserved. No part of this book may be reproduced in any form or by any electronic or mechanical means, including information storage and retrieval systems, without permission in writing from the publisher, except by a reviewer who may quote brief passages in a review.

The “Warner Books” name and logo are trademarks of Hachette Book Group, Inc.

Visit our Web site at www.HachetteBookGroup.com

A House of Gentlefolks

The Manager of “The Kremlin”

Love in the Slump

The Man Who Liked Dickens

Love Among the Ruins

The Curse of the Horse Race

Fragment of a Novel

The House: An Anti-Climax

Portrait of Young Man with Career

Antony, Who Sought Things That Were Lost

Fragments: They Dine with the Past

Evelyn Waugh wrote short fiction throughout his life. His literary career—which gained critical momentum in 1928, when his first book, a biography of Dante Gabriel Rossetti, and his first novel, Decline and Fall, were both published—actually commenced in 1926, with the publication of Waugh’s first post-Oxford story.

Through the decades that followed, as Waugh produced sixteen novels and nearly a dozen nonfiction works, he continued to write short fiction. Most of his stories appeared originally in periodicals ranging from Harper’s Bazaar to The Atlantic and Good Housekeeping. The stories were subsequently published in book form in Waugh’s lifetime in such collections as Mr. Loveday’s Little Outing and Other Sad Stories, Tactical Exercise, and Basil Seal Rides Again; an additional volume, Charles Ryder’s Schooldays, was published posthumously.

The Complete Stories of Evelyn Waugh, which makes all of Waugh’s short fiction available to American readers for the first time, is adapted from a scholarly edition compiled by Ann Pasternak Slater and published in Great Britain by the Everyman’s Library. Following is bibliographical information regarding the initial publication of each of Evelyn Waugh’s stories.

“A House of Gentlefolks,” introduced as “The Tutor’s Tale” in The New Decameron: The Fifth Day, ed. Hugh Chesterman, Basil Blackwell, Oxford, 1927.

“Out of Depth,” subtitled “An Experiment Begun in Shaftesbury Avenue and Ended in Time,” Harper’s Bazaar, London, December 1933.

“The Sympathetic Passenger,” for the “Tight Corner” series in The Daily Mail, 4 May 1939.

“Compassion,” The Month, August 1949. A shorter version appeared as “The Major Intervenes,” The Atlantic, July 1949.

“The Curse of the Horse Race,” Little Innocents: Childhood Reminiscences by Dame Ethyl Smith and others, Cobden-Sanderson, London, 1932.

“Antony, Who Sought Things That Were Lost,” The Oxford Broom, June 1923.

“Do you know, I don’t think I can read mine. It’s rather unkind.”

“Darling Basil, you must.”

“Imogen, tell him you won’t be in a rage with him.”

“Basil, do read it please.”

“Well, then, if you promise you won’t hate me”—and he smoothed out the piece of paper.

“Poor Adam, I never thought of him as Dublin, of course it’s perfect.”

“So phallic, my dear, and prickly.”

“And such vulgar flowers.”

“Yes, his digestion you know.”

“And can’t sting, only crush.”

“I must draw a picture of Adam fascinating a rabbit,” and then, “Imogen, you’re not going?”

“I must. I’m terribly sleepy. Don’t get drunk and wake me up, will you?”

“My dear, I’m far too tired to be in a rage with anybody. Good night.”

“I knew she would be, you shouldn’t have made me read it.”

“She’s been very odd all the evening, I consider.”

“She told me she lunched with Adam before she came down.”

“I expect she ate too much. One does with Adam, don’t you find?”

“But you know, I’m rather proud of that character all the same. I wonder why none of us ever thought of Dublin before.”

“Basil, do you think Imogen can have been having an affaire with Adam, really?”

NOTE.—No attempt, beyond the omission of some of the aspirates, has been made at a phonetic rendering of the speech of Gladys and Ada; they are the cook and house-parlourmaid from a small house in Earls Court, and it is to be supposed that they speak as such.

The conversations in the film are deduced by the experienced picture-goer from the gestures of the actors; only those parts which appear in capitals are actual “captions.”

A CENTRE OF LONDON NIGHT LIFE.

The “Art title” shows a still life of a champagne bottle, glasses, and a comic mask—or is it yawning?

“Never mind, dear, I can see the way. Oh, I say—I am sorry. Thought the seat was empty—really I did.”

“Well I never—tried to make me sit on ’is knee.”

“Go on. I say, Gladys, what sort of picture is this—is it comic?”

The screen is almost completely dark as though the film has been greatly over-exposed. Fitful but brilliant illumination reveals a large crowd dancing, talking and eating.

“No, Ada—that’s lightning. I dare say it’s a desert storm. I see a picture like that the other day with Fred.”

EVERYBODY LOVES MY BABY.

Close up: the head of a girl.

It is rather a lovely head, shingled and superbly poised on its neck. One is just beginning to appreciate its exquisite modelling—the film is too poor to give any clear impression of texture—when it is flashed away and its place taken by a stout and elderly man playing a saxophone. The film becomes obscure—after the manner of the more modern Continental studios: the saxophonist has become the vortex of movement; faces flash out and disappear again; fragmentary captions will not wait until they are read.

A voice with a Cambridge accent from the more expensive seats says, “Expressionismus.”

After several shiftings of perspective, the focus becomes suddenly and stereoscopically clear. The girl is seated at a table leaning towards a young man who is lighting her cigarette for her. Three or four others join them at the table and sit down. They are all in evening dress.

The girl is protesting that she must go.

“Adam, I must. Mother thinks I went out to a theatre with you and your mother. I don’t know what will happen if she finds I’m not in.”

There is a general leave-taking and paying of bills.

The hero and heroine drive away in a taxi.

Halfway down Pont Street, the heroine stops the taxi.

She hesitates for a moment and then kisses him.

Adam and the taxi drive away.

Close up of Adam. He is a young man of about twenty-two, clean-shaven, with thick, very dark hair. He looks so infinitely sad that even Ada is shaken.

Can it be funny?

The cab stops and Adam gives it all his money. It wishes him “Good-night” and disappears into the darkness. Adam unlocks the front door.

On his way upstairs he takes his letters from the hall table; they are two bills and an invitation to a dance.

He reaches his room, undresses and sits for some time wretchedly staring at himself in the glass. Then he gets into bed. He dare not turn out the light because he knows that if he does the room will start spinning round him; he must be there thinking of Imogen until he becomes sober.

The film becomes darker. The room begins to swim and then steadies itself. It is getting quite dark. The orchestra plays very softly the first bars of “Everybody loves my baby.” It is quite dark.

Close up: the heroine.

Close up: the hero asleep.

The hero still asleep. The electric light is still burning.

A disagreeable-looking maid enters, turns out the light and raises the blind.

“Is the bathroom empty?”

“I think Miss Jane’s just this minute gone along there.”

She picks up Adam’s evening clothes from the floor.

Adam lies back and ponders the question of whether he shall miss his bath or miss getting a place at the studio.

Miss Jane in her bath.

Adam deciding to get up.

Tired out but with no inclination to sleep, Adam dresses. He goes down to breakfast.

“It can’t be Society, Gladys, they aren’t eating grape fruit.”

“Well, that dress isn’t at all what I call fashionable, if you ask me.”

“Look now, ’e’s got a invitation to a dance from a Countess.”

“I don’t understand this picture.”