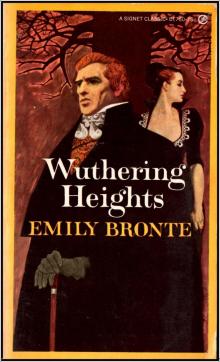 1801.--I have just returned from a visit to my landlord--the solitaryneighbour that I shall be troubled with. This is certainly a beautifulcountry! In all England, I do not believe that I could have fixed on asituation so completely removed from the stir of society. A perfectmisanthropist's heaven: and Mr. Heathcliff and I are such a suitable pairto divide the desolation between us. A capital fellow! He littleimagined how my heart warmed towards him when I beheld his black eyeswithdraw so suspiciously under their brows, as I rode up, and when hisfingers sheltered themselves, with a jealous resolution, still further inhis waistcoat, as I announced my name.

A nod was the answer.

'Mr. Lockwood, your new tenant, sir. I do myself the honour of callingas soon as possible after my arrival, to express the hope that I have notinconvenienced you by my perseverance in soliciting the occupation ofThrushcross Grange: I heard yesterday you had had some thoughts--'

'Thrushcross Grange is my own, sir,' he interrupted, wincing. 'I shouldnot allow any one to inconvenience me, if I could hinder it--walk in!'

The 'walk in' was uttered with closed teeth, and expressed the sentiment,'Go to the Deuce:' even the gate over which he leant manifested nosympathising movement to the words; and I think that circumstancedetermined me to accept the invitation: I felt interested in a man whoseemed more exaggeratedly reserved than myself.

When he saw my horse's breast fairly pushing the barrier, he did put outhis hand to unchain it, and then sullenly preceded me up the causeway,calling, as we entered the court,--'Joseph, take Mr. Lockwood's horse;and bring up some wine.'

'Here we have the whole establishment of domestics, I suppose,' was thereflection suggested by this compound order. 'No wonder the grass growsup between the flags, and cattle are the only hedge-cutters.'

Joseph was an elderly, nay, an old man: very old, perhaps, though haleand sinewy. 'The Lord help us!' he soliloquised in an undertone ofpeevish displeasure, while relieving me of my horse: looking, meantime,in my face so sourly that I charitably conjectured he must have need ofdivine aid to digest his dinner, and his pious ejaculation had noreference to my unexpected advent.

Wuthering Heights is the name of Mr. Heathcliff's dwelling. 'Wuthering'being a significant provincial adjective, descriptive of the atmospherictumult to which its station is exposed in stormy weather. Pure, bracingventilation they must have up there at all times, indeed: one may guessthe power of the north wind blowing over the edge, by the excessive slantof a few stunted firs at the end of the house; and by a range of gauntthorns all stretching their limbs one way, as if craving alms of the sun.Happily, the architect had foresight to build it strong: the narrowwindows are deeply set in the wall, and the corners defended with largejutting stones.

Before passing the threshold, I paused to admire a quantity of grotesquecarving lavished over the front, and especially about the principal door;above which, among a wilderness of crumbling griffins and shamelesslittle boys, I detected the date '1500,' and the name 'Hareton Earnshaw.'I would have made a few comments, and requested a short history of theplace from the surly owner; but his attitude at the door appeared todemand my speedy entrance, or complete departure, and I had no desire toaggravate his impatience previous to inspecting the penetralium.

One stop brought us into the family sitting-room, without anyintroductory lobby or passage: they call it here 'the house'pre-eminently. It includes kitchen and parlour, generally; but I believeat Wuthering Heights the kitchen is forced to retreat altogether intoanother quarter: at least I distinguished a chatter of tongues, and aclatter of culinary utensils, deep within; and I observed no signs ofroasting, boiling, or baking, about the huge fireplace; nor any glitterof copper saucepans and tin cullenders on the walls. One end, indeed,reflected splendidly both light and heat from ranks of immense pewterdishes, interspersed with silver jugs and tankards, towering row afterrow, on a vast oak dresser, to the very roof. The latter had never beenunder-drawn: its entire anatomy lay bare to an inquiring eye, exceptwhere a frame of wood laden with oatcakes and clusters of legs of beef,mutton, and ham, concealed it. Above the chimney were sundry villainousold guns, and a couple of horse-pistols: and, by way of ornament, threegaudily-painted canisters disposed along its ledge. The floor was ofsmooth, white stone; the chairs, high-backed, primitive structures,painted green: one or two heavy black ones lurking in the shade. In anarch under the dresser reposed a huge, liver-coloured bitch pointer,surrounded by a swarm of squealing puppies; and other dogs haunted otherrecesses.

The apartment and furniture would have been nothing extraordinary asbelonging to a homely, northern farmer, with a stubborn countenance, andstalwart limbs set out to advantage in knee-breeches and gaiters. Suchan individual seated in his arm-chair, his mug of ale frothing on theround table before him, is to be seen in any circuit of five or six milesamong these hills, if you go at the right time after dinner. But Mr.Heathcliff forms a singular contrast to his abode and style of living. Heis a dark-skinned gipsy in aspect, in dress and manners a gentleman: thatis, as much a gentleman as many a country squire: rather slovenly,perhaps, yet not looking amiss with his negligence, because he has anerect and handsome figure; and rather morose. Possibly, some peoplemight suspect him of a degree of under-bred pride; I have a sympatheticchord within that tells me it is nothing of the sort: I know, byinstinct, his reserve springs from an aversion to showy displays offeeling--to manifestations of mutual kindliness. He'll love and hateequally under cover, and esteem it a species of impertinence to be lovedor hated again. No, I'm running on too fast: I bestow my own attributesover-liberally on him. Mr. Heathcliff may have entirely dissimilarreasons for keeping his hand out of the way when he meets a would-beacquaintance, to those which actuate me. Let me hope my constitution isalmost peculiar: my dear mother used to say I should never have acomfortable home; and only last summer I proved myself perfectly unworthyof one.

While enjoying a month of fine weather at the sea-coast, I was throwninto the company of a most fascinating creature: a real goddess in myeyes, as long as she took no notice of me. I 'never told my love'vocally; still, if looks have language, the merest idiot might haveguessed I was over head and ears: she understood me at last, and looked areturn--the sweetest of all imaginable looks. And what did I do? Iconfess it with shame--shrunk icily into myself, like a snail; at everyglance retired colder and farther; till finally the poor innocent was ledto doubt her own senses, and, overwhelmed with confusion at her supposedmistake, persuaded her mamma to decamp. By this curious turn ofdisposition I have gained the reputation of deliberate heartlessness; howundeserved, I alone can appreciate.

I took a seat at the end of the hearthstone opposite that towards whichmy landlord advanced, and filled up an interval of silence by attemptingto caress the canine mother, who had left her nursery, and was sneakingwolfishly to the back of my legs, her lip curled up, and her white teethwatering for a snatch. My caress provoked a long, guttural gnarl.

'You'd better let the dog alone,' growled Mr. Heathcliff in unison,checking fiercer demonstrations with a punch of his foot. 'She's notaccustomed to be spoiled--not kept for a pet.' Then, striding to a sidedoor, he shouted again, 'Joseph!'

Joseph mumbled indistinctly in the depths of the cellar, but gave nointimation of ascending; so his master dived down to him, leaving me_vis-a-vis_ the ruffianly bitch and a pair of grim shaggy sheep-dogs,who shared with her a jealous guardianship over all my movements. Notanxious to come in contact with their fangs, I sat still; but, imaginingthey would scarcely understand tacit insults, I unfortunately ind
ulgedin winking and making faces at the trio, and some turn of my physiognomyso irritated madam, that she suddenly broke into a fury and leapt on myknees. I flung her back, and hastened to interpose the table between us.This proceeding aroused the whole hive: half-a-dozen four-footed fiends,of various sizes and ages, issued from hidden dens to the common centre.I felt my heels and coat-laps peculiar subjects of assault; and parryingoff the larger combatants as effectually as I could with the poker, Iwas constrained to demand, aloud, assistance from some of the householdin re-establishing peace.

Mr. Heathcliff and his man climbed the cellar steps with vexatiousphlegm: I don't think they moved one second faster than usual, thoughthe hearth was an absolute tempest of worrying and yelping. Happily, aninhabitant of the kitchen made more despatch: a lusty dame, withtucked-up gown, bare arms, and fire-flushed cheeks, rushed into themidst of us flourishing a frying-pan: and used that weapon, and hertongue, to such purpose, that the storm subsided magically, and she onlyremained, heaving like a sea after a high wind, when her master enteredon the scene.

'What the devil is the matter?' he asked, eyeing me in a manner that Icould ill endure, after this inhospitable treatment.

'What the devil, indeed!' I muttered. 'The herd of possessed swine couldhave had no worse spirits in them than those animals of yours, sir. Youmight as well leave a stranger with a brood of tigers!'

'They won't meddle with persons who touch nothing,' he remarked, puttingthe bottle before me, and restoring the displaced table. 'The dogs doright to be vigilant. Take a glass of wine?'

'If I had been, I would have set my signet on the biter.' Heathcliff'scountenance relaxed into a grin.

'Come, come,' he said, 'you are flurried, Mr. Lockwood. Here, take alittle wine. Guests are so exceedingly rare in this house that I and mydogs, I am willing to own, hardly know how to receive them. Your health,sir?'

I bowed and returned the pledge; beginning to perceive that it would befoolish to sit sulking for the misbehaviour of a pack of curs; besides, Ifelt loth to yield the fellow further amusement at my expense; since hishumour took that turn. He--probably swayed by prudential considerationof the folly of offending a good tenant--relaxed a little in the laconicstyle of chipping off his pronouns and auxiliary verbs, and introducedwhat he supposed would be a subject of interest to me,--a discourse onthe advantages and disadvantages of my present place of retirement. Ifound him very intelligent on the topics we touched; and before I wenthome, I was encouraged so far as to volunteer another visit to-morrow. Heevidently wished no repetition of my intrusion. I shall go,notwithstanding. It is astonishing how sociable I feel myself comparedwith him.