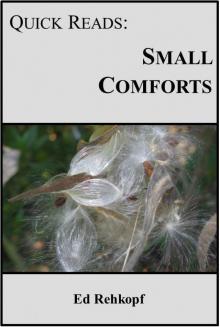 "Hannah, baby, come here and let Mommy put your shoes on. We've got to hurry if we're going to catch the bus."

The little girl with dark curls climbed down from the breakfast table where she had been eating Raisin Bran and ran into the living room. Her mother was waiting on the couch. Sensing her mother's impatience, Hannah playfully gave her a milky wet kiss and backed her rear onto the edge of the couch. Her mother wiped away the kiss distractedly and reached down to pick up one of Hannah's stockinged feet.

"Give me your foot please, Hannah," her voice betrayed her no-nonsense mood. The little girl lost balance and grabbed her mother's neck to steady herself while her shoe was being buckled.

"HAN-nah, you have to help," her mother said sharply. Then, in response to the little girl's cooperation, she added more softly, "OK, the other one now."

"Where are we going?" Hannah asked for the fourth time that morning.

"I hate going to the cemetery," said Hannah emphatically, but then giving way to a whining tone. "Why do we have to go there so much? It's boring and you always start crying."

"I know it's no fun for you, baby. But your great grandmother was the most important person in my life." She turned the little girl around and adjusted the collar of her blouse. "You know, she raised me from the time I was your age. If it hadn't been for her, I don't know where I'd be today. Annabelle was the only mother I ever had." Hannah had heard this many times before and knew it was important. Her mother continued, "She was always there when I needed her."

She patted Hannah on her shoulders and said, "Run brush your teeth while I get your coat."

Hannah spun around and ran off down the hall. Her mother sat on the couch a moment listening to her turn on the water, climb up on the toilet and open the medicine cabinet. Hannah was a lot easier to care for now that she could do things for herself. Still, her mother thought, carrying on alone wasn't going to be easy.

By the time Hannah rushed back to the living room, her mother was again sitting on the couch holding the overcoat and a hairbrush.

"Let me see the teeth," she said as Hannah opened wide for the routine inspection. "Looks good!" her mother said, kissing her lightly on the cheek. "And you remembered to put the top on the toothpaste, didn't you?"

Hannah couldn't remember, but she shook her head yes anyway. She thought she probably had.

Her mother had Hannah stand facing her with head down as she brushed the little girl's dark hair forward and drew a part down the middle. Hannah turned sideways so her mother could brush her hair into a pigtail on one side and asked, "Mommy, when will we see Daddy again?"

This question stabbed her mother like a knife. Her own struggle was difficult enough and it was almost impossible to deal with these innocent thrusts from Hannah.

"Honey, I don't know what to tell you." She saw the pain in Hannah's wide and blameless eyes and felt the hot flow of tears forming in her own. She reached out and hugged the child's body to her own. She swallowed a sob, but couldn't control the flow of tears.

"I wish somehow I could make you understand," Hannah felt her mother's hot, wet whisper against her ear.

She wished she could protect Hannah from all the pain there was in life, but she knew she was powerless against it. In time it comes to everyone. The best I can do, she thought, is to be there when she needs me, the way Annabelle was for me.

But even at that, she knew it was impossible. Just as she now faced this new pain alone, without Annabelle's soothing words and comfort, the day would come when Hannah would have to face her own pain alone.

Hannah reached around her mother's neck and gave a tight squeeze. "It's OK, Mommy. I'm here with you."

Her mother felt the small pat of reassurance on her back and realized with some certainty that it would be OK. She sniffled quietly and drew Hannah away to look into the little girl's face. She smiled bravely through her own pain and told Hannah, whose look betrayed an uncomprehending concern, that she hadn't felt such reassuring love since Annabelle died.

"As long as we have each other, you and I are going to be alright, aren't we?"

Hannah smiled uncertainly and said, "I love you, Mommy, but I hate it when you cry."

"I do too," her mother responded soberly. "I feel like I let you down every time I lose control. I don't know what I'd do if you weren't here to cheer me up." She wiped under both eyes with a tissue. "Believe me, dear Hannah, you're such a comfort to your mother . . ."

She hugged Hannah again and then broke off suddenly saying, "We'd better hurry if we're going to catch our bus."

A blustery wind buffeted the old trees of the cemetery, unleashing colorful torrents of leaves that tumbled wildly down. On the ground they chased about like excited children, resting breathlessly against stones and trees before rushing off again in play. White clouds, intent upon distant destinations, moved with purpose across a clear blue sky. The air was clean and fresh, bringing color to the cheek and a cleansing relief to the city.

Hand in hand, Hannah and her mother entered the cemetery through one of the large iron gates. Hannah's grey overcoat was buttoned tight, its wool collar turned up to the blasts of air that pushed her along. Both she and her mother wore scarves against the pummeling wind.

As she skipped along trying to keep her mother's anxious pace, Hannah's small right hand rested snugly in her mother's. In the other, she carried the bouquet of yellow and gold mums they had purchased coming through the park.

A sudden swirl of leaves danced past and Hannah broke free to chase after them. Her mother watched her run through the grass, surprised how thin her legs looked beneath the coat. If she hadn't known the coat, she would hardly recognize the child. In that old overcoat and scarf she seemed a waif out of time and place.

A wind-blown squirrel caught in the open by Hannah, zigzagged back and forth before bounding to the trunk of a dying elm. Hannah chased around the tree giggling aloud as the squirrel scolded from above. Stepping back to get a better look, she fell backward over something hidden in the leaves. Though the sudden fall surprised more than hurt her, she let out a pitiful wail. Her mother hurried from the path to pick her up and hold her tight.

As her mother wiped away her tears and brushed her coat, Hannah looked to see what had tripped her. Beneath the leaves and thick grass was a small grey stone. She showed it to her mother who cleared away the debris for a better look. It was the marker for Amelia Hood. At Hannah's prompting, her mother read aloud that Amelia was the infant daughter of Charles and Mary Hood who died April 17, 1964, aged two years, one month and twelve days.

Hannah studied the stone then looked at her mother, asking, "What does 'infant' mean?"

"It means she was a child," her mother replied.

"Well, yes," her mother answered slowly. This was a conversation to approach with care. "Actually she was younger than you."

"When she went away," her mother said evasively. Then trying to change the subject, she asked brightly, "How old are you now, Hannah? Can you tell Mommy how old you are?"

Hannah wasn't sure she understood death. "You mean she went where Great Grandma Annabelle went?" she asked, ignoring her mother's diversion. But that didn't sound right, either. "I thought only old people died?" she said looking at the stone with a puzzled look.

"Where do people go when they die?"
Hannah persisted. "Do they come back? Did Amelia go to the same place as Great Grandma?"

"I'm sure they're both in heaven," said her mother, grabbing Hannah's hand to move on. They started across the grass toward Annabelle's grave. "There's a special part of heaven just for little children."

Hannah, still clutching the flowers tightly in her hand, wanted to know what kind of place heaven was.

"It's a peaceful place where everybody's happy."

Hannah was still confused. "How can Amelia be happy if she had to leave her mommy and daddy?" There was an edge of concern in Hannah's voice. "I don't ever want to leave you and Daddy."

A pained look came across her mother's face. She couldn't bear the thought of losing Hannah. She stopped, squatted next to her child and gathered her in her arms. "Don't worry, honey, you're not going anywhere. God knows I need you too much."

When they found Annabelle's grave, Hannah helped her mother clear away the leaves and twigs covering the spot. Then, in a brief but familiar ritual, Hannah recited a short prayer to this woman she knew only from photographs.

Long before, her mother had told her that prayers were a way of talking with someone who wasn't there. Hannah knew there were two kinds of prayers; the kind you have to 'memberize' and those you could just make up. You used the first kind when you talked to God. The other you could use to talk to anyone . . . to God or your great grandmother or even to a