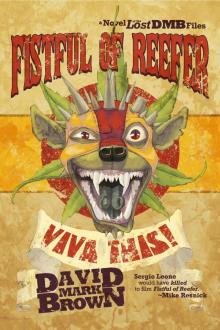 Fistful of Reefer is a dieselpunk, weird Western pulp featuring goats, guns and the camaraderie of outcasts.Set along the Texas border during the waining years of the Mexican revolution, Fistful focuses on a group of unlikely heros and their unlikely foe as they stumble upon the fringes of a cabal bent on world domination.Fistful lives between No country for Old Men and the Three Amigos."Sergio Leone would have killed to filmFISTFUL OF REEFER. Harry Turtledove would admirethe way history has been skewed. Others will lovethe notion of Reeferpunk. The estimable Mr. Brownhas really latched onto something here."-- Mike ResnickFistful of Reefer delivers a surge equivalent to a cocktail of 1 part serotonin, 2 parts adrenaline, with a dash of grenadine served over ice. This double-fisted, dieselpunk weird-Western resides between No Country for Old Men and The Three Amigos.In 1918, when Chancho Villarreal and his friends inadvertently create the legend of El Chupacabra, they draw the attention of Texas Ranger J.T. McCutchen to their goat ranch and marijuana farm north of Del Rio, Texas. What follows is an action-packed ride across the wilds of a Texas haunted by rumors of Chupacabras behind every bush."David Brown has opened up a new genre in fiction for meand I can't wait for him to write the next book." Theresa Mereszczak"David really has a hand for action.The sudden flood was one epic scene!" Marcus from Goodreads"Perfect summer reading. Fun, different and engaging.Anyway, my vote is get it!" Seth Neal
Actions & Adventure / Western
Read online