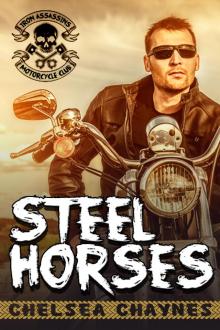 This is a work of fiction. Names, characters, places, and incidents are the product of the author’s imagination. Any resemblance to actual persons, living or dead, businesses or establishments, events, or locales, is entirely coincidental.

All characters depicted in this story are over the age of 21.

To outlaw men, and the women that love them.

I was only a month out of the FBI Academy at Quantico, and let’s just say I didn’t think they would send me into the middle of the Mojave Desert my first time undercover. California City, what a dump. The Job wouldn’t be easy, that much was made clear to me. I was tasked to take down the Iron Assassins Motorcycle Club who ran heroin, methamphetamine and guns throughout the southwestern United States. They told me it was a “career-maker,” but I’d been here a week and I already wanted to leave.

The weather in California City was nasty. It was hotter than Hades in the afternoon, and the temperature dipped at night, setting a deep chill into my bones. The wind was another matter entirely, whipping so hard on some days it threatened to pick me up off my feet into an alternate universe. I clicked my heels, but who was I kidding? This wasn’t a fantasy. The desert wasn’t a land for normal people, this was a land for outlaws and I was right, smack-dab in the middle of it.

The stories told of the Iron Assassins Motorcycle Club were the stuff urban legends were made of. They were the government, the law, the judge, the jury and the executioner. Half the police force was in their pockets in one way or another. The business community didn’t say anything about the IAMC’s dealings, because, well, who would? If you spoke up against the IAMC they used fear to intimidate you. Not an enviable position to be in.

It was a nice racket they had going, and profitable too. An FBI report estimated they were currently earning between seven and ten million dollars of cash annually, spread across their various business ventures, tax free. And I got to be the one to take them down, a tall order for any undercover agent, especially one as neon green as me.

I stared in my bathroom mirror, curling my luscious blonde hair, locking it down with a few sprays of aquanet. I put some blush on my face and stepped into my leather pumps, which led to leather pants, which hugged my ass in all the right places. If I wanted to catch an outlaw, I had to play the part of one; hard on the outside, soft on the inside.

I turned off the lights in my bathroom on the way out of my house, which was paid for by the FBI. It was one of the job’s perks, but this big old house wasn’t going to keep my bed warm at night. I opened up the door to my red Honda Civic, fired up the engine and headed toward the Dusty Piston, a grime covered bar at the end of town. It was here, I was told, that Colt Winters and his band roughnecks came to drink, party, and in all seriousness, snort methamphetamine off the bartenders’ asses. Who was going to stop them?

I tapped my finger on the gold crucifix hanging at the end of a gold chain between my B-cup breasts. “Damian, can you hear me?” Modern surveillance technology was incredible.

An imperceptible implant in my ear registered back. “Loud and clear, Agent James. Good luck. I’m a block away from the bar in a cable installation van, awaiting your arrival.”

With each turn of the wheel toward the Dusty Piston my mind began to race. Could I really do this? All my cockiness and arrogance was being deflated quickly. Having Damian in my ear and hanging around my neck added to my self-consciousness. I wanted to operate alone.

I pulled up to the Dusty Piston, parking on the street in front. The sun had just set, the temperature dropping twenty degrees in an instant. I couldn’t wait to get in the bar and order a drink. And that’s exactly what I did.

I opened the door to the establishment and a blast of warm air hit me square in the face. I pulled up a hard, wooden barstool and sat on it, the bartender approached me promptly. “What are you having, Sweetheart?”

I looked her dead in the eyes. “The name’s not Sweetheart, it’s Jessica James. You can call me Jessie. I’ll have a whiskey, neat.” In reality my name was Marybeth James, a name I hoped no one in Cal City ever learned. And just to keep it straight I made the FBI call me Jessica, or Jessie, they went as far as to get me a driver’s license, birth certificate and passport supporting the identity. For all intents and purposes, Marybeth was dead.

The bartender pulled a glass from the well. “Coming right up Jessie. I like your style, by the way. Those pants are hot! You can call me Missy.”

Her eyes were bloodshot; she’d probably been up all night snorting meth. I couldn’t blame her though there wasn’t shit else to do in this town. Missy slid the drink across the bar and into my hands. I sipped it. As I put my glass of whiskey back on the bar, the roar of a pack of motorcycles reverberated through the walls. Everything shook, including me. Missy smiled. “It’s gunna be a good night tonight. Hot diggity damn!”

I took another sip of my whiskey and played it cool.

Two men burst through the door, clad in their leather vests, or “cuts” as they called them. They sat down at the bar next to me. I kept my cool externally, though internally my heart just about exploded with fear. The sensation passed.

“Hey Missy!” one of the bikers said, his long gray hair flowing backward over his leather vest. “Give an old man a whiskey would ya? My bones ache something fierce. It’s too damn cold out there to ride!”

Missy smiled. “Sure thing, Doc.” It was clear she loved these guys. She poured those drinks all right, tripling up the booze until whiskey spilled over the glass and across the steel gray bar.

Missy looked at the other man. “Beast? What are you having tonight?”

He looked her cold in the eyes. “Tequila, straight. No salt, no lemon, no lime.”

One more man pulled up a seat and scooted into the bar. Missy didn’t skip a beat. “Houston, baby. What are you having?”

He smiled. “Pour me a scotch Missy. You know what I like.”

She nodded. “One Lagavullin on the rocks, coming right up.”

I still didn’t see Colt but I was sure he was close. Per the dossiers I’d reviewed his entire governmental body was represented at the bar, which was comprised of Houston (John Tunstall), Beast (Patrick Garret), and Doc (James Dolan). I scooted down a bit to give them some room. The men were rowdy, hollering and yelling as they swallowed shots of whiskey and tequila like water.

I was taken by them, fascinated as one watches animals at the zoo. They had not a care in the world. They hugged on one another, slapping each other’s back in camaraderie, truly grateful for their brotherhood, to be part of something bigger than themselves. These weren’t the faces of miserable men strangled to death by the outlaw life; these were the faces of men who were satisfied on some basic, human level.

Why was I not as happy as them? The question nagged at me, my own lonely, single life under my mental microscope as I took another sip of my whiskey, finishing it strong. A man walked up behind me, gently touching my upper back. “Missy, she’ll have another. On me.”

I turned around in shock, making eye contact with him. His handsome face was covered in dark brown stubble, which attempted to cover a scar acros
s his right cheek. His arms were strong. You could tell he worked out, even under his leather cut, which was covered in patches signifying his accomplishments and status in his crew. The one I was most interested in simply said “Prez.”

He held out is hand toward mine. “I’m Colt.”

I played it cool, but couldn’t help the small smile that emerged on my face. My fish nibbled on the bait and I hadn’t even jiggled the line. I shook his hand. “I’m Jessie, Jessie James.”

He laughed. “Jessie what?”

I smiled coyly. “Jessie James,” I said. “Short for Jessica.”

He scratched his stubble. “Ahh, an outlaw are you? Then I guess you must know you’re in an outlaw bar, in an outlaw town. You’ll fit right in.” He pointed toward the seat next to me. “May I sit?”

I blushed. “Sure, go right ahead.”

My crucifix was falling out of my shirt and dangling in the light. I hoped Damian was capturing all of this, but at the same time hated him listening in. It made me stiff when I needed to be flexible.

Colt stared at the cross. Or perhaps it was my breasts he was after? He couldn’t resist taking the crucifix between his fingers and rubbing it. “Interesting place for a catholic girl isn’t it?” He smiled at me, letting the crucifix drop back down between the crevice of my breasts.

My heart was pounding so loud I thought he could hear it. Time slowed as I formulated a response, a patina of sweat forming on my skin. “I like to keep him close to me.” I smiled. Stupid.

There was a sly grin on Colt’s face. “Do you only keep one man near your heart? Or is there room for two?”

I sat stunned. He went after what he wanted, unlike the weak and insecure men that filled my life to this point. “That all depends on the man,” I said.

Missy came back with my drink, sliding it slowly across the bar into my hand. “Missy,” Colt said, “Why don’t you bring me one too, and make it a double.”

Missy smiled from ear to ear, happy to please him and brought back a glass, clearly a quadruple. He grabbed it. “Toast with me outlaw Jessie James?”

I grabbed my drink and held it towards him. “What are we toasting to?”

He smiled, his eyes locking on to mine. “To outlaws.”

We touched the rims of our glasses, the sound echoing outward as we both fired back our shots. “Another!” he yelled.

I giggled. Trying to remember the dossier I’d read on him, trying to match it to the man sitting next to me. The two were incompatible. Who was this man? Who was Colt Winters and why did I smile uncontrollably in his presence?