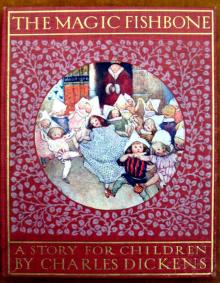 With Illustrations by S. Beatrice Pearse

The Queen came in most splendidly dressed p. 27]

The story contained herein was written by Charles Dickens in 1867. It isthe second of four stories entitled "Holiday Romance" and was publishedoriginally in a children's magazine in America. It purports to be writtenby a child aged seven. It was republished in England in "All the YearRound" in 1868. For this and four other Christmas pieces Dickens receivedL1,000.

"Holiday Romance" was published in book form by Messrs Chapman & Hall in1874, with "Edwin Drood" and other stories.

For this reprint the text of the story as it appeared in "All the YearRound" has been followed.

SEVERAL OF THE CHILDREN WERE GROWING OUT OF THEIR CLOTHES]

There was once a King, and he had a Queen; and he was the manliest ofhis sex, and she was the loveliest of hers. The King was, in his privateprofession, Under Government. The Queen's father had been a medical manout of town.

They had nineteen children, and were always having more. Seventeen ofthese children took care of the baby; and Alicia, the eldest, took careof them all. Their ages varied from seven years to seven months.

Let us now resume our story.

One day the King was going to the office, when he stopped at thefishmonger's to buy a pound and a half of salmon not too near the tail,which the Queen (who was a careful housekeeper) had requested him to sendhome. Mr Pickles, the fishmonger, said, "Certainly, sir, is there anyother article, Good-morning."

The King went on towards the office in a melancholy mood, for quarter daywas such a long way off, and several of the dear children were growing outof their clothes. He had not proceeded far, when Mr Pickles's errand-boycame running after him, and said, "Sir, you didn't notice the old lady inour shop."

Now, the King had not seen any old lady, because this old lady had beeninvisible to him, though visible to Mr Pickles's boy. Probably because hemessed and splashed the water about to that degree, and flopped the pairsof soles down in that violent manner, that, if she had not been visible tohim, he would have spoilt her clothes.

Just then the old lady came trotting up. She was dressed in shot-silk ofthe richest quality, smelling of dried lavender.

"King Watkins the First, I believe?" said the old lady.

"Papa, if I am not mistaken, of the beautiful Princess Alicia?" said theold lady.

"And of eighteen other darlings," replied the King.

"Listen. You are going to the office," said the old lady.

It instantly flashed upon the King that she must be a Fairy, or how couldshe know that?

"You are right," said the old lady, answering his thoughts, "I am the GoodFairy Grandmarina. Attend. When you return home to dinner, politely invitethe Princess Alicia to have some of the salmon you bought just now."

"It may disagree with her," said the King.

The old lady became so very angry at this absurd idea, that the King wasquite alarmed, and humbly begged her pardon.

"We hear a great deal too much about this thing disagreeing, and thatthing disagreeing," said the old lady, with the greatest contempt it waspossible to express. "Don't be greedy. I think you want it all yourself."

The King hung his head under this reproof, and said he wouldn't talk aboutthings disagreeing, any more.

"Be good, then," said the Fairy Grandmarina, "and don't! When thebeautiful Princess Alicia consents to partake of the salmon--as I thinkshe will--you will find she will leave a fish-bone on her plate. Tellher to dry it, and to rub it, and to polish it till it shines likemother-of-pearl, and to take care of it as a present from me."

"Is that all?" asked the King.

"Don't be impatient, sir," returned the Fairy Grandmarina, scolding himseverely. "Don't catch people short, before they have done speaking. Justthe way with you grown-up persons. You are always doing it."

The King again hung his head, and said he wouldn't do so any more.

"Be good then," said the Fairy Grandmarina, "and don't! Tell the PrincessAlicia, with my love, that the fish-bone is a magic present which can onlybe used once; but that it will bring her, that once, whatever she wishesfor, PROVIDED SHE WISHES FOR IT AT THE RIGHT TIME. That is themessage. Take care of it."

The King was beginning, "Might I ask the reason--?" when the Fairy becameabsolutely furious.

"_Will_ you be good, sir?" she exclaimed, stamping her foot on the ground."The reason for this, and the reason for that, indeed! You are alwayswanting the reason. No reason. There! Hoity toity me! I am sick of yourgrown-up reasons."

The King was extremely frightened by the old lady's flying into such apassion, and said he was very sorry to have offended her, and he wouldn'task for reasons any more.

With those words, Grandmarina vanished, and the King went on and on andon, till he came to the office. There he wrote and wrote and wrote, tillit was time to go home again. Then he politely invited the PrincessAlicia, as the Fairy had directed him, to partake of the salmon. Andwhen she had enjoyed it very much, he saw the fish-bone on her plate, asthe Fairy had told him he would, and he delivered the Fairy's message, andthe Princess Alicia took care to dry the bone, and to rub it, and topolish it till it shone like mother-of-pearl.

He saw the Fish-bone on her Plate]

And so when the Queen was going to get up in the morning, she said, "O,dear me, dear me; my head, my head!" and then she fainted away.

The Princess Alicia, who happened to be looking in at the chamber-door,asking about breakfast, was very much alarmed when she saw her Royal Mammain this state, and she rang the bell for Peggy, which was the name of theLord Chamberlain. But remembering where the smelling-bottle was, sheclimbed on a chair and got it, and after that she climbed on another chairby the bedside and held the smelling-bottle to the Queen's nose, and afterthat she jumped down and got some water, and after that she jumped upagain and wetted the Queen's forehead, and, in short, when the LordChamberlain came in, that dear old woman said to the little Princess,"What a Trot you are! I couldn't have done it better myself!"

But that was not the worst of the good Queen's illness. O, no! She wasvery ill indeed, for a long time. The Princess Alicia kept the seventeenyoung Princes and Princesses quiet, and dressed and undressed and dancedthe baby, and made the kettle boil, and heated the soup, and swept thehearth, and poured out the medicine, and nursed the Queen, and did allthat ever she could, and was as busy busy busy, as busy could be. Forthere were not many servants at that Palace, for three reasons; becausethe King was short of money, because a rise in his office never seemed tocome, and because quarter day was so far off that it looked almost as faroff and as little as one of the stars.

But on the morning when the Queen fainted away, where was the magicfish-bone? Why, there it was in the Princess Alicia's pocket. She hadalmost taken it out to bring the Queen to life again, when she put itback, and looked for the smelling-bottle.

After the Queen had come out of her swoon that morning, and was dozing,the Princess Alicia hurried up-stairs to tell a most particular secret toa most particularly confidential friend of hers, who was a Duchess. Peopledid suppose her to be a Doll; but she was really a Duchess, though nobodyknew it e
xcept the Princess.

This most particular secret was a secret about the magic fish-bone, thehistory of which was well known to the Duchess, because the Princess toldher everything. The Princess kneeled down by the bed on which the Duchesswas lying, full-dressed and wide awake, and whispered the secret to her.The Duchess smiled and nodded. People might have supposed that she neversmiled and nodded, but she often did, though nobody knew it except thePrincess.

Then the Princess Alicia hurried downstairs again, to keep watch in theQueen's room. She often kept watch by herself in the Queen's room; butevery evening, while the illness lasted, she sat there watching with theKing. And every evening the King sat looking at her with a cross look,wondering why she never brought out the magic fish-bone. As often as shenoticed