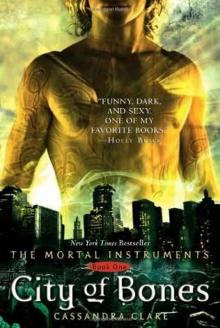 When fifteen-year-old Clary Fray heads out to the Pandemonium Club in New York City, she hardly expects to witness a murder — much less a murder committed by three teenagers covered with strange tattoos and brandishing bizarre weapons. Then the body disappears into thin air. It's hard to call the police when the murderers are invisible to everyone else and when there is nothing — not even a smear of blood — to show that a boy has died. Or was he a boy?

This is Clary's first meeting with the Shadowhunters, warriors dedicated to ridding the earth of demons. It's also her first encounter with Jace, a Shadowhunter who looks a little like an angel and acts a lot like a jerk. Within twenty-four hours Clary is pulled into Jace's world with a vengeance, when her mother disappears and Clary herself is attacked by a demon. But why would demons be interested in ordinary mundanes like Clary and her mother? And how did Clary suddenly get the Sight? The Shadowhunters would like to know. . . .

Exotic and gritty, exhilarating and utterly gripping, Cassandra Clare's ferociously entertaining fantasy takes readers on a wild ride that they will never want to end.

Book One of the Mortal Instruments

I would like to thank my writing group, the Massachusetts All-Stars: Ellen Kushner, Delia Sherman, Kelly Link, Gavin Grant, Holly Black, and Sarah Smith. Also, Tom Holt and Peg Kerr for encouraging me before there ever was a book, and Justine Larbalestier and Eve Sinaiko for giving me their thoughts on it once it was. My mother and father for their dedication, affection, and unswerving belief that I would eventually produce something publishable. Jim Hill and Kate Connor for their encouragement and support. Eric for vampire motorbikes that run on demon energies and Elka for looking better in black than the widows of her enemies. Theo and Val for creating beautiful images to go with my prose. My glamorous agent, Barry Goldblatt, and my talented editor, Karen Wojtyla. Holly for living through this book with me, and Josh for making it all worthwhile.

I have not slept.

Between the acting of a dreadful thing

And the first motion, all the interim is

The Genius and the mortal instruments

Are then in council; and the state of man,

The nature of an insurrection.

I sung of Chaos and eternal Night,

Taught by the heav'nly Muse to venture down

The dark descent, and up to reascend…

"You've got to be kidding me," the bouncer said, folding his arms across his massive chest. He stared down at the boy in the red zip-up jacket and shook his shaved head. "You can't bring that thing in here."

The fifty or so teenagers in line outside the Pandemonium Club leaned forward to eavesdrop. It was a long wait to get into the all-ages club, especially on a Sunday, and not much generally happened in line. The bouncers were fierce and would come down instantly on anyone who looked like they were going to start trouble. Fifteen-year-old Clary Fray, standing in line with her best friend, Simon, leaned forward along with everyone else, hoping for some excitement.

"Aw, come on." The kid hoisted the thing up over his head. It looked like a wooden beam, pointed at one end. "It's part of my costume."

The bouncer raised an eyebrow. "Which is what?"

The boy grinned. He was normal-enough-looking, Clary thought, for Pandemonium. He had electric blue dyed hair that stuck up around his head like the tendrils of a startled octopus, but no elaborate facial tattoos or big metal bars through his ears or lips. "I'm a vampire hunter." He pushed down on the wooden thing. It bent as easily as a blade of grass bending sideways. "It's fake. Foam rubber. See?"

The boy's wide eyes were way too bright a green, Clary noticed: the color of antifreeze, spring grass. Colored contact lenses, probably. The bouncer shrugged, abruptly bored. "Whatever. Go on in."

The boy slid past him, quick as an eel. Clary liked the lilt to his shoulders, the way he tossed his hair as he went. There was a word for him that her mother would have used—insouciant.

"You thought he was cute," said Simon, sounding resigned. "Didn't you?"

Clary dug her elbow into his ribs, but didn't answer.

Inside, the club was full of dry-ice smoke. Colored lights played over the dance floor, turning it into a multicolored fairyland of blues and acid greens, hot pinks and golds.

The boy in the red jacket stroked the long razor-sharp blade in his hands, an idle smile playing over his lips. It had been so easy—a little bit of a glamour on the blade, to make it look harmless. Another glamour on his eyes, and the moment the bouncer had looked straight at him, he was in. Of course, he could probably have gotten by without all that trouble, but it was part of the fun—fooling the mundies, doing it all out in the open right in front of them, getting off on the blank looks on their sheeplike faces.

Not that the humans didn't have their uses. The boy's green eyes scanned the dance floor, where slender limbs clad in scraps of silk and black leather appeared and disappeared inside the revolving columns of smoke as the mundies danced. Girls tossed their long hair, boys swung their leather-clad hips, and bare skin glittered with sweat. Vitality just poured off them, waves of energy that filled him with a drunken dizziness. His lip curled. They didn't know how lucky they were. They didn't know what it was like to eke out life in a dead world, where the sun hung limp in the sky like a burned cinder. Their lives burned as brightly as candle flames—and were as easy to snuff out.

His hand tightened on the blade he carried, and he had begun to step out onto the dance floor when a girl broke away from the mass of dancers and began walking toward him. He stared at her. She was beautiful, for a human—long hair nearly the precise color of black ink, charcoaled eyes. Floor-length white gown, the kind women used to wear when this world was younger. Lace sleeves belled out around her slim arms. Around her neck was a thick silver chain, on which hung a dark red pendant the size of a baby's fist. He only had to narrow his eyes to know that it was real—real and precious. His mouth started to water as she neared him. Vital energy pulsed from her like blood from an open wound. She smiled, passing him, beckoning with her eyes. He turned to follow her, tasting the phantom sizzle of her death on his lips.

It was always easy. He could already feel the power of her evaporating life coursing through his veins like fire. Humans were so stupid. They had something so precious, and they barely safeguarded it at all. They threw away their lives for money, for packets of powder, for a stranger's charming smile. The girl was a pale ghost retreating through the colored smoke. She reached the wall and turned, bunching her skirt up in her hands, lifting it as she grinned at him. Under the skirt, she was wearing thigh-high boots.

He sauntered up to her, his skin prickling with her nearness. Up close she wasn't so perfect: He could see the mascara smudged under her eyes, the sweat sticking her hair to her neck. He could smell her mortality, the sweet rot of corruption. Got you, he thought.

A cool smile curled her lips. She moved to the side, and he could see that she was leaning against a closed door, no admittance—storage was scrawled across it in red paint. She reached behind her for the knob, turned it, slid inside. He caught a glimpse of stacked boxes, tangled wiring. A storage room. He glanced behind him—no one was looking. So much the better if she wanted privacy.