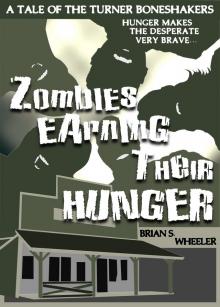 ﻿SPECIAL THANKS FOR DOWNLOADING THIS FREE EBOOK

Fallen Stardust: A boy, an outcast and an alien must find salvation in a world of ruin. Samuel must find a medicine to cure the fever ravaging his village. Markus must find the motive that murdered those he loved. And an angel must find a future in a city crumbled into debris. But something lurks beneath the wasted world, and waking it may doom what little of humanity survives.

The Sisters Will Dance: Blaine Woosely claws his way back to the living. He has cleaned his blood of his addiction, and an unexpected, family farm home rewards his efforts. Only, the country acres isolate Blaine when a sharp-toothed monster hunts to bring Blaine back to dark. The sad history of Blaine's blood brings magic to the country home's new master, but in the end, only Blaine himself can break his chains.

Mr. Hancock’s Signature: The dead walk in Monteray. The corpse of a nearly forgotten farmer named Hancock arrives via train. Ian Washington remembers Mr. Hancock and vows to return the body home. Yet Mr. Hancock's body will not rest while Ian works to reopen a cemetery, and the corpse staring each morning upon the doorstep forces the town to choose between the isolation of their fear or the hope of their fellowship.

(A Tale of the Turner Boneshakers)

Flatland Fiction thanks you for your purchase of this ebook. This ebook remains the copyrighted property of the author and may not be reproduced, scanned, or distributed for any commercial or non-commercial use without permission from the author. Quotes used in reviews are the exception. No alteration of content is allowed. If you enjoy this ebook, Flatland Fiction encourages you to send us a review at [email protected] Unless otherwise instructed, Flatland Fiction reserves the right to post such reviews online.

Your support and respect for the property of this author is appreciated.

This book is a work of fiction and any resemblance to persons, living or dead, or places, events or locales is purely coincidental. The characters are productions of the author’s imagination and used fictitiously.

(A Tale of the Turner Boneshakers)

Chapter 1 – A Little Something More Than Groceries

Chapter 7 – A Zombie Choosing a Tool

Help Spread the Story Across the Flatland

Other Stories at Flatland Fiction

Chapter 1 – A Little Something More Than Groceries

“The boxes of chocolates are further down the aisle, son. They’re right across from the boxed cans of pop.”

Ollie Turner saw the young boy flinch as he addressed the child from behind his general store’s register counter. He also saw that sealed packet of baseball cards drop out from the boy’s long shirtsleeve. Ollie smiled. For boys will be boys, especially when the parents of those boys couldn’t afford to waste dollars on anything as frivolous as baseball cards. Baseball cards did nothing to settle hungry stomachs, but baseball cards attracted the eyes of young boys all the same.

“You just take your time, son, and gather everything that your mom and dad sent you to find in my store,” added Ollie as the boy hurried in the direction of the Styrofoam cups of noodles. “Just bring your basket up here to my register when you’re finished, and I’ll be sure to give you a receipt.”

Ollie snickered as he watched the boy try his hardest not to lift his eyes off of the store’s tile floor, and thus risk looking upon Ollie Turner’s ugly face. Ollie knew he was an ugly man. He may have been a handsome man if compared to any other member of the Turner family, but even a handsome man from that ancestral tree was a terrible thing for the public to behold.

Of course, Ollie didn’t care to spit at what anyone in that wasted, speck of a town named Beckmire thought of him. He had no empathy to offer any of the hungry mouths who limped into his general store, and anyone from town who thought he donated goods from his shelves just because he didn’t always take dollars was a fool. Ollie always collected. Ollie’s heart growled as he watched that young boy pull tins of sardines and bags of oyster crackers into his plastic basket. What cowardly mother or father sent such a young boy to face the general store’s ugly proprietor, when they lacked the courage themselves to peek at that store keeper’s terrible features? Had he expected something nobler from anyone who called Beckmire home? What had he hoped for from such insular and timid people who populated that town?

He would count all of them within his ranks soon - the young girls and boys, the stronger men and women, the weak and confused elderly. All of them would answer to his whim. Perhaps he would rent out their backs to the pig farms and orchards surrounding town. Maybe he would send them to swing sickles against the barbed weeds that swayed along the county highway. Or maybe, he would use them to bust the concrete and carry away the broken pieces so that he could finally use those souls to dig the foundation to that extension he hoped to finally add to his home. It really didn’t matter much to Ollie how he might employ those souls once they fell into his sway. What was important was that everyone in that festering town would soon answer to him.

“Don’t forget to check out the books and the magazines, son.” Ollie shouted over the counters. “Your grandmother might appreciate a collection of crossword puzzles. Your mother might be very happy if you brought home the latest novel of supernatural suspense.”

Ollie clicked his tongue, and a long, strange bug scampered out from beneath a pile of kettle corn bags to perch upon the back of the shop keeper’s hand. Ollie admired his bugs. Every good boneshaker developed his or her personal brand. His bugs looked like a wriggling creation that might result after a spider and a praying mantis traded genetic strands, a creation that blended the ugliest bits of the millipede with the shimmering eyes of a horsefly. Add a segmented tail that ended in a barb, and that bug was no more pleasant to look upon than Ollie’s face.

The boy’s frightened voice warbled above an aisle. “Do you have any peanuts? My grandfather wanted me to ask you if you had any peanuts.”

Ollie snickered. “Doesn’t matter, son. All the peanuts are on the same shelf, practically occupying the same spot. Over by where I keep all the batteries.”

The bug perched atop of Ollie’s hand emitted a shrill chirp. Ollie wriggled a finger and chased the bug off to hide beneath some other display of breath mints or chewing gum. The boy would quickly become very familiar with that strand of insect. There was no need to hurry the introduction between one family of vermin and another within Beckmire. Plans best hatched when Ollie practiced a little patience.

So while he waited for that boy to locate all the junkfood his parents considered necessities for their dietary survival, Ollie illustrated his strange systems of receipts. With a dull stick of black charcoal, Ollie traced the strange geometries of a boneshaker’s craft – the ellipses and triangles, the ovals and the diamonds, all the stars and the arcs. That boy’s family would have a good laugh when their young son carried that receipt home. They would laugh and think they had pulled a fast one over the ugly store proprietor when they saw that receipt covered in meaningless shapes and instead of numbers. How could ugly Ollie Turner ever ask them to pay their debts when the storekeeper placed gibberish, rather than costs, upon his receip
ts?

Ollie snorted with laughter to imagine that reaction. It would be too late for them the moment that receipt crossed their threshold.

And then, the bugs would follow. And then, that boy, that sister, that mother, father, grandfather and grandmother would soon after grab their shovels, hammers, rakes and hoes and join in the boneshaker’s zombie ranks.

Ollie grinned. He vowed to make every miserable soul in Beckmire earn their right to hunger.