You Can't Be Too Careful, Page 1 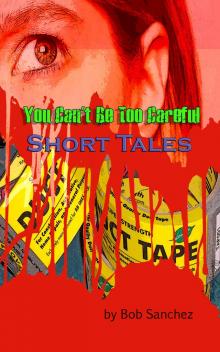 ﻿You Can’t Be Too Careful

Also by Bob Sanchez at

Praise for the author:

Bob Sanchez is a consummate writer.

You wrote a book? That’s nice, dear. I hope it doesn’t have any dirty words.

Nothing that Needed Eyes

GEORGE KNEW THE WORLD was coming apart at the seams. Only by furious effort had the world avoided the Y2K debacle, with its attendant threat of planetary lockjaw. Citizens would have been shot dead for their bottled water, their gasoline, their triple-A batteries and their clean underwear.

“I’ve had it with you, George.” Lila was trying to tell him something. He examined an unopened roll of duct tape, wondering if the stuff had an expiration date. Maybe he’d better buy a fresh supply, just in case.

Lila grabbed the package out of his hand. “This isn’t going to keep out sarin, anthrax, or radioactive isotopes.”

“You’re red in the face,” George said. Maybe she’d picked up a bug at the corner café. “Are you sick?”

“Only of living in a bomb shelter, surrounded by” --she waved an arm in a sweeping motion--”sterile gauze and chlorine tablets. And a year’s supply of Charmin!”

“Because if you’re sick, you should sleep on the cot tonight.” He took back the duct tape and opened the package. “Maybe I didn’t seal the windows properly.”

“We don’t need to live like this! We are not a terrorist target--we’re a hundred miles from the nearest city!”

“But downwind,” he said quietly.

George took Lila’s hand, and for a fleeting moment her expression softened. Then he placed the roll of duct tape into her hand. “At least take this,” he said.

He thought nothing of it when her jaw dropped at the sight of his gift.

Or when she gripped it tightly in her fist.

Or when she cocked her arm like a World Series fastballer.

So he didn’t blink when her arm whipped forward. The hard, black roll followed a short, swift trajectory from her fingertips to his temple. George had always suspected that his life would end in a flash of blinding light.

And so it did.

I STILL WONDER HOW it happened, having a son who weighs 240 pounds, wears an earring, and snacks on weight-gaining supplements. It seems just yesterday when Calvin was born, but in fact it was eighteen years and six months ago, which makes it six months since he moved out of our house.

The earring means Calvin is gay, Jennifer says, but I'm not so sure. He'd just as soon let us wonder, knowing it's another burr in our backsides.

But Calvin is here today to see his grandmother. He walks into the living room wearing cut-off jeans, and a gray sweatshirt that looks as though the arms had been ripped off above the elbow. Ragged threads hang from every limb. A few strands of blond hair have escaped from his ponytail, which is another source of parental pain. He sits on the couch, waiting for me to speak, but I have nothing to say to him anymore. He looks at his arms and flexes, fist curled inward, with a self-admiring pose of the sort that appears on the covers of the body-building magazines that he used to keep in his room. Now that he's in his own apartment, I dread what I might find there. It's why I've never gone.

"Oh God, Son, don't do that when Grandmother comes down," Jennifer says. She stirs her martini and lights a cigarette. "You know, I would think that out of respect to my mother you would make yourself more presentable."

He flexes again, then stops at the sound of his grandmother coming down the stairs. Jennifer's mother has been a widow for a month now and has just arrived to live with us. My stomach knotted the evening we agreed to invite her, and it hasn't been right since.

Jennifer and I stand up and receive her hugs; she kisses the air an inch from my cheek. Whatever fragrance is on her neck, she has spritzed too much. Her skin looks a size too large for her frame, which I'd noticed at her husband's funeral, and the backs of her hands have liver spots, which I'd not noticed before. Calvin hadn't traveled to Ohio with us to the funeral.

"May I sit down next to you, Big Fellow?" Grandmother asks Calvin. Calvin nods and looks straight ahead at the fireplace, which is between Jennifer and me. Grandmother plunks herself down, her knees together and her hands folded in her lap; she hardly dents the cushion she sits on. Calvin's cushion begs for mercy.

"Well," she says with a smile, "it's so good of you to take me in." What else could we do? When she had collapsed at the funeral, Jennifer and I wondered whether she would survive the loss of her husband of fifty years.

"Are you comfortable, Mother?" I ask.

"I'm feeling a bit awkward, Roger, intruding into your lives like this."

"You're not intruding," Jennifer says, her tone flat.

"You've put me in Calvin's old room. Where are you now, Calvin?"

"He's, ah, moved out," Jennifer says. Smoke curls from her cigarette towards the ceiling.

"I know that. But I asked Calvin where he's living."

"He's got a tongue of his own, Roger. Calvin, Dear, later would you care to show me your place?"

Calvin looks at his sandals. "I'm sorry I didn't go to Grandpa's funeral," he says.

"That's in the past, Dear. Your grandfather would understand."

"That's pretty generous, Mom," Jennifer says. "Dad would never know what to make of Calvin's ingratitude." Calvin is quiet, but his lips thin at the sound of the truth.

His grandmother becomes silent too. I go to the kitchen and mix her a martini, very dry with an olive, the way she always takes it. I place it on one of the Maui coasters on the coffee table in front of her, although she seems not to notice. For a moment she and Calvin stare in the same direction, past Jennifer and into the fireplace. Why then do I have the impression they are staring into different worlds?

She turns and touches Calvin on the shoulder. He pulls back a little, maybe wanting to be touched and not wanting to be touched at the same time, wanting comfort but fearing that her fingertips would melt his fragile defenses. Needing love but fearing it. "You've become a strapping man indeed," she says. "If I had a man like you by my side, I'd walk down any street without fear." The compliment makes Calvin squirm, but h
e smiles.

"Normally," Jennifer says, "he would have a smart remark." Her words slur a little; a second martini usually does that, especially when she makes her own in a tumbler. Grandmother looks at her, pained but quiet. Calvin's muscles twitch. Although he's never raised a hand to us, I sometimes wonder.

On one end of the living room sits a baby grand piano. "We gave him everything, Mother. Everything. Like five years of piano lessons. All that money spent, and today I'll bet he couldn't find middle C."

Calvin stands up suddenly, and I flinch. "Spilled your drink, Dad," he says. He walks over to the Steinway and lifts the lid that covers the keys. He bangs a key and slams the lid.

Mother smiles at Jennifer. "He still knows middle C, Dear. The lessons weren't a waste. Your Steinway is out of tune, though."

"Their whole life is out of tune," Calvin says.

He should talk. The Calvin we raised has disappeared, if he ever existed except in our dreams. He seems hell-bent not to fulfill the promise of the genes we passed along to him. SAT scores of 400 had suited him fine; as it turned out, he had never intended to go to college anyway. When we asked him about his college plans two years ago, he replied, "East Nowhere." I called him Calvin the Dud and suggested that he held down his SATs on purpose. I had just wanted to provoke him, to make him think about his future. Nothing seemed to straighten him out; I even suggested he join the army for a couple of years and then go to college. But he wasn't doing either, he said, and did I mind not interfering with his life. The first in three generations of our family not to go to college, and he had to be my son.

I don't know how he supports himself, even with the occasional check we send him. Certainly cashiering at the Mobil station can't be enough.

Later in the afternoon, Grandmother returns from a visit to Calvin's apartment. Jennifer mixes up a Caesar salad for tonight's dinner while I mix up the drinks.

"So," Jennifer says, trying to prime a conversation.

"It's not quite what I expected," Grandmother says.

"Yes, Roger. That's where we were." A touch of impatience in her voice. A welcome addition to our happy household.

"What's it like?" I ask, imagining a gallery of male pin-ups.

"I'm sorry. Calvin asked that I keep a confidence."

"Might show confidence in us just once," Jennifer says. "Why does he want to keep secrets from his parents?"

"He wants your approval," Grandmother says.

Jennifer snuffs out her cigarette. "Such an interesting way to show it," she says.

"He knows you disapprove of him, and he's hurting."

"How are we supposed to deal with that?"

I realize that we are trying to protect Jennifer's mother from Calvin, while she tries to protect Calvin from us. Meanwhile, who protects Jennifer and me from ourselves?

"I'm not sure he wants that," Grandmother says. "He worries that you'll criticize his apartment, his friends, even his life."

"He's your son, Roger." With that, Jennifer rolls her eyes and leaves the room. Grandmother's hand lies softly on my wrist. "Who is he? That's the question, isn't it? You can't lose him, you can't afford to. Much of yourself would disappear if he left your life. The same would happen if Jennifer left mine, and Lord knows we have our differences."

There are too many questions now, and I wonder what a visit to Calvin's apartment would accomplish. I remember the pain when I tried to talk with my own father, long before he died. You try to open a dialogue, and all you open is