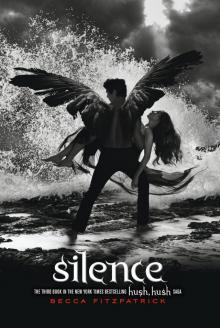 THE SLEEK BLACK AUDI ROLLED TO A STOP IN THE parking lot overlooking the cemetery, but none of the three men inside had any intention of paying respects to the dead. The hour burned past midnight, and the grounds were officially closed. A strange summer fog hung thin and dreary, like a string of rising ghosts. Even the moon, a slender waxing crescent, resembled a drooping eyelid.

Before the road dust settled, the driver leaped out, promptly opening the two rear car doors.

Blakely exited first. He stood tall with graying hair and a hard, rectangular face—nearly thirty in human years, though markedly older by Nephilim count. He was followed by a second Nephil named Hank Mill ar. Hank, too, was uncommonly tall with blond hair, snapping blue eyes, and charismatic good looks. His creed was “Justice over mercy,” and that, combined with his quick rise to power in the Nephilim underworld during the last few years, had earned him the nicknames the Fist of Justice, Iron Fist, and most famously, the Black Hand. He was hailed among his people as a visionary leader, a savior. But in smaller backroom circles, he was quietly referred to as the Blood Hand.

Hushed voices murmured not of a redeemer, but of a ruthless dictator. Hank found their nervous chatter amusing; a true dictator had absolute power and no opposition. Hopefully, someday he could live up to their expectations.

Hank stepped out and lit a cigarette, taking a long drag. “Are my men assembled?”

“Ten men in the woods above us,” Blakely answered. “Another ten in cars at both exits. Five are hiding at various points within the cemetery; three just inside the doors of the mausoleum, and two along the fence. Any more, and we’d give ourselves away. Undoubtedly, the man you are meeting tonight will come with his own backup. ”

Hank smiled in the darkness. “Oh, I rather doubt that. ”

Blakely blinked. “You brought twenty-five of your best Nephilim fighters to go against one man?”

“Not a man,” Hank reminded him. “I don’t want anything to go wrong tonight. ”

“We have Nora. If he gives you trouble, put him on the phone with her. They say angels can’t feel touch, but emotions are fair game. I’m certain he’ll feel it when she screams. Dagger is standing by, at the ready. ”

“You said you wanted to break her spirit. ”

“I did say that, didn’t I?” Hank mused. It had been four short days since he’d taken her captive, dragging her out of a maintenance shed inside Delphic Amusement Park, but he’d already determined precisely which lessons she needed to learn. First, never to undermine his authority in front of his men. Second, devotion to her Nephilim bloodline. And perhaps most important, to show her own father respect.

Blakely handed Hank a small mechanical device with a button at the center that glowed an unearthly shade of blue. “Put this in your pocket. Press the blue button and your men will swarm in from every direction. ”

“Has it been enhanced with devilcraft?” Hank asked.

A nod. “Upon activation, it is designed to temporarily immobilize the angel. I can’t say for how long. This is a prototype, and I haven’t thoroughly tested it. ”

“Have you spoken of this to anyone?”

Satisfied, Hank pocketed the device. “Wish me luck, Blakely. ” His friend patted his shoulder. “You don’t need it. ”

Flicking aside his cigarette, Hank descended the stone steps leading to the cemetery, a rather foggy patch of land that made his vantage point useless. He’d hoped to see the angel first, from above, but was comforted by the knowledge that he was backed by his own handpicked and highly trained militia.

At the base of the steps, Hank peered through the shadows warily. It had started to drizzle, washing out the fog. He could make out towering gravestones and trees that twisted wildly. The cemetery was overgrown and almost mazelike. No wonder Blakely had suggested the spot. The likelihood of human eyes accidentally witnessing tonight’s events was negligible.

There. Ahead. The angel leaned on a gravestone, but at the sight of Hank, he straightened.

Dressed strictly in black, including a leather motorcycle jacket, he was difficult to distinguish from the shadows. He hadn’t shaved in days, his hair was unruly and unkempt, and there were lines of worry around his mouth. Mourning the disappearance of his girlfriend, then? All the better.

“You look a little worse for wear … Patch, is it?” Hank said, stopping a few feet away.

The angel smiled, but it wasn’t pleasant. “And here I thought maybe you’d had a few sleepless nights yourself. After all, she’s your own flesh and blood. From the looks of it, you’ve been getting your beauty sleep. Rixon always said you were a pretty boy. ” Hank let the insult roll off. Rixon was the fall en angel who used to possess his body every year during the month of Cheshvan, and he was as good as dead. With him gone, there was nothing left in the world that frightened Hank. “Well? What do you have for me? It had better be good. ”

“I paid a visit to your house, but you’d skulked off into hiding with your tail between your legs and taken your family with you,” the angel said in a low voice resonating with something Hank couldn’t quite interpret. It was halfway between contempt and … mockery.

“Yes, I thought you might try something rash. An eye for an eye, isn’t that the creed of fall en angels?” Hank couldn’t tell if he was impressed by the angel’s cool demeanor, or irritated. He’d expected to find the angel frantic and desperate. At the very least, he’d hoped to provoke him to violence. Any excuse to bring his men running. Nothing like a bloodbath to instil camaraderie. “Let’s cut the pleasantries. Tell me you brought me something useful. ” The angel shrugged. “Playing your rat seemed unimportant next to finding where you’ve stashed your daughter. ”

The muscles in Hank’s jaw tightened. “This wasn’t the deal. ”

“I’ll get you the information you need,” the angel answered, almost conversationally if it weren’t for that chilling gleam in his eyes. “But first release Nora. Get your men on the phone now. ”

“I need insurance you’ll cooperate long-term. I’m keeping her until you make good on your side of the deal. ”

The corners of the angel’s mouth tipped up, but it was hardly a smile. There was something truly menacing in the result. “I’m not here to negotiate. ”

“You aren’t in a position to. ” Hank reached into his breast pocket and retrieved his phone. “I’m out of patience. If you’ve wasted my time tonight, it’s going to be an unpleasant night for your girlfriend.

One call, and she goes hungry—”

Before he had time to carry out his threat, Hank felt himself tripping backward. The angel’s arms flashed out, and all air escaped Hank in a rush. His head hit something solid, and waves of black rolled across his vision.

“This is how it’s going to work,” the angel hissed. Hank tried to muster a shout, but the angel’s hand was clenched at his throat. Hank kicked his feet, but the gesture was pointless; the angel was too strong. He scratched for the panic button in his pocket, but his fingers fumbled uselessly. The angel had cut off his oxygen. Red lights popped behind his eyes and his chest felt as though a stone had rolled on top of it.

In a burst of inspiration, Hank invaded the angel’s mind, teasing apart the threads that formed his thoughts, focusing fixedly on redirecting the angel’s intentions, weakening his motivation, all the while whispering a hypnotic, Release Hank Millar, release him now—

“A mind-trick?” the angel scorned. “Don’t bother. Ma
ke the call,” he commanded. “If she walks free in the next two minutes, I’ll kill you quickly. Anything longer than that, and I will rip you apart, one piece at a time. And trust me when I say I will enjoy every last scream you utter. ”

He felt a searing pain erupt across his cheek. He howled, but the sound never made it past his lips. His windpipe was crushed, vised in the angel’s grip. The raw, burning pain intensified, and all around, Hank could smell blood mixed with his own perspiration.

“One piece at a time,” the angel hissed, dangling something papery and drenched in dark liquid over Hank’s whirling vision.

“Can’t—talk!” Hank gurgled. If he could only reach the panic button …

Swear an oath to release her now, and I’ll let you talk. The angel’s threat slipped easily into Hank’s head.

You’re making a big mistake, boy, Hank fired back. His fingers brushed his pocket, slipping inside. He clenched the panic device.

The angel made a guttural sound of impatience, ripped the device away and hurled it into the fog.

Swear the oath or your arm goes next.

I’ll uphold our original deal, Hank returned. I’ll spare her life and bury all thought of avenging Chauncey Langeais’s death if you’ll bring me the information I need. Until then, I vow to treat her humanely—

The angel slammed Hank’s head against the ground. Between the nausea and pain, he heard the angel say, I’m not leaving her with you another five minutes, let alone the time it will take me to get what you want.

Hank tried to peer over the angel’s shoulder, but all he saw was a fence of gravestones. The angel had him on the ground, blocked from view. His men couldn’t see him. He didn’t believe the angel could kill him—he was immortal—but he wasn’t going to lie here and let himself be mutilated until he resembled a corpse.

He curled his lips and locked eyes with the angel. I’ll never forget how loud she screamed when I dragged her away. Did you know she screamed your name? Over and over. She said you’d come for her. That was the first couple of days, of course. I think she’s finally starting to accept you’re no match for me.

He watched the angel’s face darken as if with blood. His shoulders shook, his black eyes dilated with rage. And then it all happened in stunning agony. One moment Hank was on the verge of blacking out from the white-hot pain of his pummeled flesh, and the next he was staring at the angel’s fists, painted with his blood.

A deafening howl thundered out of Hank’s body. The pain exploded inside him, nearly knocking him unconscious. From some distant place, he heard the running feet of his Nephilim men.

“Get—him—off—me!” he snarled as the angel tore at his body. Every nerve ending raged with fire. Heat and agony leaked from his pores. He caught sight of his hand, but there was no flesh—

only mangled bone. The angel was going to shred him to pieces. He heard grunts of effort from his men, but the angel was still on top of him, his hands raking fire everywhere they touched.