Only the Good Spy Young, p.1 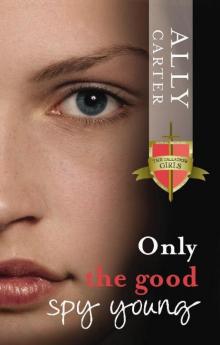 My best friend's voice was as cool as the wind as it blew off the Thames. Her resolve was as solid as the Tower of London's ancient stone walls that stood twenty feet away . I could see the night getting darker - the lights grow brighter - and my best friend's confidence was almost contagious. Almost. But staring at the crowd in the distance, I couldn't help but think I am not prepared for this.

I mean don't get me wrong, I am prepared for a lot of scary situations. After all, in the last year and a half I'd been fake kidnapped once, almost truly kidnapped twice, targeted by one international terrorist and two incredibly cute boys. So, scary? Yeah, scary and I go way back.

But at that moment Rebecca Baxter and I were standing on ice skates on a rink that used to be the moat around the Tower of London. We were outnumbered and outsized. So something about that moment was . . . terrifying.

Even though my best friend was beside me. Even though our school had trained us well.

Even though we go to a school for spies.

Part of me hoped Bex was talking about her father, who stood by the skating rinks concession stand, or her mother, who was by the rink's east exit. I totally wished that Bex was talking about the agents in the crowd, whose job it was to protect me - like that woman with the backpack who had been trailing us all afternoon, or the man who was posted at the top of Tower Bridge, as it transportation routes for a half mile in any direction. But I knew Rebecca Baxter well enough to know that she wasn't talking about the spies. She was talking about . . . the boys.

When Bex spun effortlessly and skated backward past the crowd of guys that stood laughing and showing off at the edge of the rink, every single one of them turned to stare at her. Her red scarf waved in the wind as she smiled. "So which one do you want?

"No thanks. " I shrugged. "Trying to give them up.

I mean, sure they looked nice, cute, and completely harmless, but if there's one thing we Gallagher Girls know, it's that looks can totally be deceiving.

"No thank you," I said with a shake of my head.

"The one with . . . " Bex didn't finish. Her eyes went wide and she stared past me, but my mind was thinking back to a chilly November night in Washington D. C. , and a steamy summer afternoon on a rooftop in Boston, as the two scariest moments of my life flashed before my eyes.

I felt my heart begin to pound. "What is it?" I scanned the crowd, trying to catch a glimpse of what Bex had seen.

I spun on the ice, waiting for Bex's mother, for her father, for some of my guards to register the same shock I saw in my best friend's eyes, but their faces were blank.

But my best friend just pouted, raised her hand to her mouth, and said, "Oops. "

Well, it turns out that pretending to fall down is an excellent way to make boys stop staring and start moving. Of, course our other roommate, Liz, would no doubt require a lot more evidence before citing that as a scientific certainty, but considering that fact that eight boys had been staring and seven boys rushed to Bex's rescue, I'd say our results were pretty statistically sound.

But, honestly, at that moment statistics were the last thing on my mind, because fluffy white snowflakes were floating through the night sky that stood between me and the one boy who didn't move, the boy who didn't swoon, the boy who just stood by the rails with his hands in his pockets, staring at me, saying, "Happy New Year, Gallagher Girl. "

There is a pretty wide range of emotions that any girl - much less a Gallagher Girl - is bound to encounter on any given day - from joy to sadness, frustration to excitement.

At that point it's pretty safe to say that I was feeling all of them.

And I was trying to show none of them.

Bex's seven suitors kneeled beside her on the ice, while my skates pulled me closer to the one boy who lingered by the rail.

"You look cold," I somehow managed to say.

"I used to have a warmer jacket, but then I gave it to some girl. "

Despite having known him for almost a year, there were a lot of things I still didn't know about Zachary Goode. Like how soap and shampoo could smell so much better on him than anyone else. Like where he went when he wasn't showing up at random (and frequently dangerous) points in my life. And, most of all, I didn't know how when he mentioned the jacket, he made me think about the sweet, romantic part of the night last November when he's given it to me, and not the terrible, bloody, international-terrorist-are-trying-to-kidnap-me part that came right after.

From the corner of my eye, I could see that the boys had "helped" Bex to a bench not far away, but Zach didn't seem to notice. He just inched closer to me and smiled.

"Besides, it looked better on you. "

There are a lot of things that that the Gallagher Academy teaches us to remember, but right then I was wishing my exceptional education had also taught me how to forget.

I mean, it was a chilly night in a foreign city, and an incredibly hot guy was smiling at me through the soft glow of sparkly lights! The absolute last thing I wanted to remember was the last time I'd seen Zach - the screeching tires or the masked men. Seriously, forgetting would have come in so incredibly handy at that particular moment. But I'm a Gallagher Girl. We don't forget anything.

"Why do I get the feeling you aren't here on vacation?" I asked.

I heard Bex laughing. I sensed Zach's hand inching down the rail, closer and closer to mine. For just one second, I thought he might say me - that he was here to see me.

"I'm looking for Joe Solomon. " He glanced around the Tower grounds. "Thought maybe he was with you?"

And just that quickly the pounding of my heart took on an entirely different meaning.

Sure, it sounded like an easy question, but nothing about my Covert Operations instructor has even been easy. Ever.

"What's wrong?" I asked, my mind reeling with at least a dozen reasons why Mr.

"Nothing, Gallagher Girl. It's probably noth-"

"Tell me or I'll yell for Mr. and Mrs. Baxter, and you can find out how Bex became Bex. "

He kicked the hard-packed snow gathered at the edge of the rink.

"We were supposed to meet up a few days ago, but he didn't show. " Zach stared at me.

Okay, I know when most teenagers talk about someone not calling, they're usually complaining. Or whining. But Zach isn't exactly the whining type.

I felt cold for the first time in the ice.

"He's not on my protection detail. "

"Your mom's off looking for leads on the Circle, right?" Zach asked. "Could he be with her?"

"Has he checked in with the Baxters?"

"No one ever tells me anything, remember?" I searched his face, and despite everything, I couldn't help but savor the face that there was finally something Zach didn't know.

"You've got to go," Zach said with a nod in the Baxter's direction.

"No," Zach snapped, then shook his head and forced a smile. "It's probably nothing, Gallagher Girl. Go on. Have fun," he said, as if that were possible.

"They'd know," Zach reminded me. His voice softened. "Whatever is going on, I promise you they know a whole lot more than me do.

Zach eased away from the rail while, behind us, Mr. Baxter's voice grew louder. "Let's go, Cammie!

I looked over my shoulder at my best friend's father, her mother, and the guards that had surrounded me for weeks. "I'll be right there!"

When I turned back to the rail, Zach was already gone.

Bex's dad is one of England's top spies (not to mention the man who taught his daughter how to use a Barbie as a weapon when she was seven), so I didn't run after Zach. I didn't yell. I just kept pace beside Abe Baxter, skating slowly across the ice.

"The Tower of London is the oldest royal building still in official use today, Cammie. "

"She knows, Dad," Bex said, even though A) I actually didn't know, and B) at that point, I had far more covert facts on my mind.

"Mr. Baxter -" I started to say, but Bex's father was already pointing at the Tower's tall stone walls and saying, "The Jewel House alone is a Grade AA target -"

"She knows, Dad," Bex said again, rolling her eyes. But she didn't really seem annoyed when she stared up at her father listening for him to go on.

"It has reinforced titanium security gates and a nine-hundred-and-eighty-point self-modifying laser grid. " Then he stopped. "I'm sorry, Cammie, you were saying?"

But something in the way he looked at me made me forget about Zach and Mr. Solomon and even the Circle of Caven. Something reminded me that dads tell corny jokes. Dads drone on and on about history facts that don't really matter to ninety-nine percent of the world's population. Dads sometimes look at daughters like they're more precious than all the diamonds in England. I remembered that - once upon a time - someone had looked like that at me.

"I . . . I just wanted to thank you again for letting me spend winter break with you," I managed to mutter.

He squeezed my shoulder. "It's our pleasure, Cameron. "

"Ooh . . . ravens!" Mr. Baxter said, easing onto the bench beside me. He pointed to a blackbird that was scavenging for crumbs near the base of the tall stone wall. "Now, there's an interesting piece of history, Cammie. According to legend, England will fall if the ravens ever leave the Tower of London. "

Still, as I glided to one of the benches and started loosening the laces on my skates, my fingers didn't want to work. It was like I'd forgotten how to breathe.

I looked at the bird but didn't say anything. It was so black against the white ice.