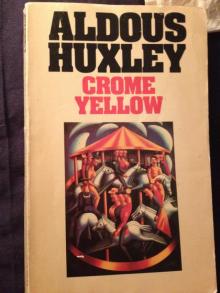 Along this particular stretch of line no express had ever passed. Allthe trains--the few that there were--stopped at all the stations.Denis knew the names of those stations by heart. Bole, Tritton,Spavin Delawarr, Knipswich for Timpany, West Bowlby, and, finally,Camlet-on-the-Water. Camlet was where he always got out, leaving thetrain to creep indolently onward, goodness only knew whither, into thegreen heart of England.

They were snorting out of West Bowlby now. It was the next station,thank Heaven. Denis took his chattels off the rack and piled them neatlyin the corner opposite his own. A futile proceeding. But one must havesomething to do. When he had finished, he sank back into his seat andclosed his eyes. It was extremely hot.

Oh, this journey! It was two hours cut clean out of his life; two hoursin which he might have done so much, so much--written the perfect poem,for example, or read the one illuminating book. Instead of which--hisgorge rose at the smell of the dusty cushions against which he wasleaning.

Two hours. One hundred and twenty minutes. Anything might be done inthat time. Anything. Nothing. Oh, he had had hundreds of hours, and whathad he done with them? Wasted them, spilt the precious minutes as thoughhis reservoir were inexhaustible. Denis groaned in the spirit, condemnedhimself utterly with all his works. What right had he to sit in thesunshine, to occupy corner seats in third-class carriages, to be alive?None, none, none.

Misery and a nameless nostalgic distress possessed him. He wastwenty-three, and oh! so agonizingly conscious of the fact.

The train came bumpingly to a halt. Here was Camlet at last. Denisjumped up, crammed his hat over his eyes, deranged his pile of baggage,leaned out of the window and shouted for a porter, seized a bag ineither hand, and had to put them down again in order to open the door.When at last he had safely bundled himself and his baggage on to theplatform, he ran up the train towards the van.

"A bicycle, a bicycle!" he said breathlessly to the guard. He felthimself a man of action. The guard paid no attention, but continuedmethodically to hand out, one by one, the packages labelled to Camlet."A bicycle!" Denis repeated. "A green machine, cross-framed, name ofStone. S-T-O-N-E."

"All in good time, sir," said the guard soothingly. He was a large,stately man with a naval beard. One pictured him at home, drinking tea,surrounded by a numerous family. It was in that tone that he must havespoken to his children when they were tiresome. "All in good time, sir."Denis's man of action collapsed, punctured.

He left his luggage to be called for later, and pushed off on hisbicycle. He always took his bicycle when he went into the country. Itwas part of the theory of exercise. One day one would get up at sixo'clock and pedal away to Kenilworth, or Stratford-on-Avon--anywhere.And within a radius of twenty miles there were always Norman churchesand Tudor mansions to be seen in the course of an afternoon's excursion.Somehow they never did get seen, but all the same it was nice to feelthat the bicycle was there, and that one fine morning one really mightget up at six.

Once at the top of the long hill which led up from Camlet station, hefelt his spirits mounting. The world, he found, was good. The far-awayblue hills, the harvests whitening on the slopes of the ridge alongwhich his road led him, the treeless sky-lines that changed as hemoved--yes, they were all good. He was overcome by the beauty of thosedeeply embayed combes, scooped in the flanks of the ridge beneath him.Curves, curves: he repeated the word slowly, trying as he did so to findsome term in which to give expression to his appreciation. Curves--no,that was inadequate. He made a gesture with his hand, as though to scoopthe achieved expression out of the air, and almost fell off his bicycle.What was the word to describe the curves of those little valleys? Theywere as fine as the lines of a human body, they were informed with thesubtlety of art...

But he really must find that word. Curves curves...Those little valleyshad the lines of a cup moulded round a woman's breast; they seemed thedinted imprints of some huge divine body that had rested on these hills.Cumbrous locutions, these; but through them he seemed to be gettingnearer to what he wanted. Dinted, dimpled, wimpled--his mind wandereddown echoing corridors of assonance and alliteration ever further andfurther from the point. He was enamoured with the beauty of words.

Becoming once more aware of the outer world, he found himself on thecrest of a descent. The road plunged down, steep and straight, into aconsiderable valley. There, on the opposite slope, a little higher upthe valley, stood Crome, his destination. He put on his brakes; thisview of Crome was pleasant to linger over. The facade with its threeprojecting towers rose precipitously from among the dark trees of thegarden. The house basked in full sunlight; the old brick rosily glowed.How ripe and rich it was, how superbly mellow! And at the same time, howaustere! The hill was becoming steeper and steeper; he was gainingspeed in spite of his brakes. He loosed his grip of the levers, and ina moment was rushing headlong down. Five minutes later he was passingthrough the gate of the great courtyard. The front door stood hospitablyopen. He left his bicycle leaning against the wall and walked in. Hewould take them by surprise.

Crome Yellow by Aldous Huxley / Humor have rating 3.2 out of 5 / Based on16 votes