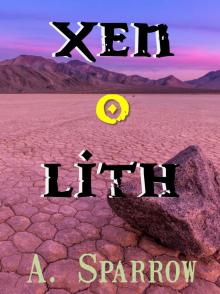 Copyright 2009 by A. Sparrow, All Rights Reserved

To Setta and Maddie

5: Up the River and Gone

xenolith n. – a stone foreign to the matrix that embeds it.

Frank lay bound and on his side. Cords bit into his wrists and ankles. Inches from his face, ants scrambled from their mound, spreading like brushfire, spoiling for war.

He tried wriggling away, but a captor’s knee stopped him. A sandaled foot rose from the thicket of legs and pushed his face into the dirt. His nostrils filled with dead-leaf musk and something foul, like peccary spoor, and the faintest whiff of the sweet peas he had carried for Liz all the way from Bethesda, their stems strewn and trampled beside him.

Frank’s pulse stuttered against the cords at his wrists. His lungs rasped an involuntary breath of fire. He worried less about the pain or his attackers’ intentions and more about the palpitations in his chest. He was struggling to remain calm, fearing that the stress would worsen his arrhythmia, but his heart drummed on, syncopation unbound by any time signature. Obsessing over its rhythm only made it beat harder and more erratically.

His abductors, both male and female, bickered in a tongue he couldn’t peg. Its clicks and pops sounded more African than Amerindian. Petite and nimble, they moved with child-like grace. They resembled the local Mayans only superficially, their faces flatter, complexions more olive than bronze. Odd bits of armor dangled from their bodies: gauntlets and cuirasses made of leather and braided twine, vests with brown, overlapping scales like the wing cases of giant beetles. They bristled with machetes and spears. One even held something that resembled a crossbow.

One man, not old at all, but the oldest of Frank’s captors, stood apart in manner and dress. He wore black sneakers, jeans, and a Ziggy Marley T-shirt. He looked familiar, somehow.

The pressure eased from Frank’s head. A warm trickle – blood? – ran down his cheek. He squirmed around a root that had been jabbing into his ribs. Hands reached down, helped him sit and brushed ants and bits of debris from his face. Frank half turned and met the stern gaze of a young woman. A swath of scabs marred one side of her face. The eye contact further ossified her expression as she extended a grubby finger and probed Frank’s damaged ear.

Frank hoped her actions meant they would spare him.

This should have calmed his heart, but it sped on, beats falling as randomly as the first splats before a rain storm.

A wrecked guitar with popped strings and splintered ribs leaned against a tree. Recognition flared.

“Hey!” Frank said. “You were on the bus to San Ignacio. You followed me!”

The older man’s eyes shifted lazily. “Follow you? I think maybe I am one who is follow.”

“Listen, I didn’t see anything. I won’t say anything about … this.”

“This?” said the man, his eyes quizzical, his smile warped. “What you mean … this?”

The man shrugged. “No worry. You live for now.” His eyes darted to a younger man. “No give him reason to change mind.”

The younger man tossed his head back and snorted.

The older man understood English, never a certainty this far west in Belize, but another good sign. Clear communications had once helped Frank wriggle free of a similar predicament in the Congo. He was jaded by years of working in failed states; secure, peaceful Belize had put Frank off his guard. In Somalia, bandits and warlords ruled the roads and abductions were as common as camels. But this was Belize where, at worst, some nutcase hijacks a chicken bus on occasion.

It would help if he knew his captors’ proclivities and sensitivities, but that depended on who they were, which was far from clear at this point. These were not mere drunken soldiers at a roadblock. But who were they?

Frank didn’t get the sense that this bunch ran drugs. In Colombia, FARC narcoterrorists sometimes took hostages for money, but Frank would have made a poor catch for such a group. An independent consultant, Frank had no employer to pay his ransom, and he had no family to speak of, no one to notice or care that he was taken.

Frank’s vision began to blur, and not just from the rivulets of sweat running into his eyes. Syncope was not his friend. From the looks of it, no one in this crowd could give him CPR like the young man who had come to his aid when he collapsed outside a Starbucks in Georgetown.

The scarred woman pored through the contents of his pack. She pulled aside his prescriptions, medical kit, and lunch; repacked the remaining odds and ends and tossed the pack to one of her comrades. She had already relieved Frank of the pocket knife that had hung in a sheath on his belt, but let him keep his wallet and passport.

“Those pills,” said Frank, hoarsely. “I need them. I’ve got a heart problem.”

The man who spoke English turned to Frank. “What’s this? Your heart has problem? My too.” He held up his broken guitar. “My beauty. Smash up. Break my heart.”

“No joke,” said Frank. “I need those pills. My heart’s beating fast and rough. Those pills will help me. I only need one. Just one.”

The man crouched down and placed his palm on Frank’s forehead. He peeled back Frank’s eyelids with thumb and forefinger; pressed the back of his hand against
Frank’s neck.

“You fine,” said the man. “A little excite maybe. And too red in the face. But how I can know? People like you, you not pale, you red.”

A strip of cloth slid over Frank’s eyes, triggering panic. He ducked and slid out from under the blindfold before it could pull tight. “Please! I’m no threat to you all.” Frank motioned with his chin towards a pile of stones set with a bronze plaque coated in lichen and verdigris. The undone bundle of wilted sweet peas lay scattered before a cairn. “Those rocks over there … that’s my wife’s … memorial. This is where I lost her. I just came here to remember Liz. See those flowers?”

“Stay still!” said the man from the bus, re-securing the blindfold. “You must come, and you must not see.”

Someone pinched Frank’s nose shut, forcing his mouth open. A flask clinked against his teeth and a putrid, bitter fluid dribbled in. Strong hands clamped his jaw shut until he swallowed. Frank sputtered and spat out the traces. His stomach quailed.

More cords coiled around him and pulled snug. Waves of tingly warmth spread from his gut. His muscles turned to mush.

Hands hoisted, propelled him. He bounced and bounded along, head flopping as if it would roll off his shoulders. Branches scraped his face. Bees buzzed in his ears.

He passed from sun to shade, shade to sun, drifting towards oblivion. Knocks and bumps and cool drops of water jolted him awake, but the fog would roll back and consume him. Faces filled his mind’s eye: loved ones, strangers – a gallery of the living and the dead. Thudding onto the ground, he slumped into a bed of warm sand, draping it like a dead worm. His pulse settled into a lazy, loping groove. The outside world blinked out, leaving him alone with his visions.

I am a man of constant sorrow,

No pleasure on this earth I’ve found.

In this world, I’m bound to ramble,

I have no friends to help me now.