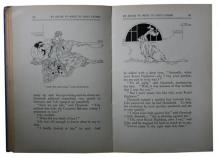 ONCE ON A TIME

This book was written in 1915, for the amusement of my wife and myselfat a time when life was not very amusing; it was published at the endof 1917; was reviewed, if at all, as one of a parcel, by some briskuncle from the Tiny Tots Department; and died quietly, withoutseriously detracting from the interest which was being taken in theWorld War, then in progress.

It may be that the circumstances in which the book was written havemade me unduly fond of it. When, as sometimes happens, I amintroduced to a stranger who starts the conversation on the rightlines by praising, however insincerely, my books, I always say, "Butyou have not read the best one." Nine times out of ten it is so. Thetenth takes a place in the family calendar; St. Michael or St. Agatha,as the case may be, a red-letter or black-letter saint, according towhether the book was bought or borrowed. But there are few suchsaints, and both my publisher and I have the feeling (so common topublishers and authors) that there ought to be more. So here comesthe book again, in a new dress, with new decorations, yet much, as faras I am concerned, the same book, making the same appeal to me; but,let us hope, a new appeal, this time, to others.

For whom, then, is the book intended? That is the trouble. Unless Ican say, "For those, young or old, who like the things which I like,"I find it difficult to answer. Is it a children's book? Well, whatdo we mean by that? Is _The Wind in the Willows_ a children's book?Is _Alice in Wonderland?_ Is _Treasure Island?_ These aremasterpieces which we read with pleasure as children, but with howmuch more pleasure when we are grown-up. In any case what do we meanby "children"? A boy of three, a girl of six, a boy of ten, a girl offourteen--are they all to like the same thing? And is a book"suitable for a boy of twelve" any more likely to please a boy oftwelve than a modern novel is likely to please a man of thirty-seven;even if the novel be described truly as "suitable for a man ofthirty-seven"? I confess that I cannot grapple with these difficultproblems.

But I am very sure of this: that no one can write a book whichchildren will like, unless he write it for himself first. That beingso, I shall say boldly that this is a story for grown-ups. Howgrown-up I did not realise until I received a letter from an unknownreader a few weeks after its first publication; a letter which saidthat he was delighted with my clever satires of the Kaiser, Mr. LloydGeorge and Mr. Asquith, but he could not be sure which of thecharacters were meant to be Mr. Winston Churchill and Mr. Bonar Law.Would I tell him on the enclosed postcard? I replied that they werethinly disguised on the title-page as Messrs. Hodder & Stoughton. Infact, it is not that sort of book.

But, as you see, I am still finding it difficult to explain just whatsort of book it is. Perhaps no explanation is necessary. Read in itwhat you like; read it to whomever you like; be of what age you like;it can only fall into one of two classes. Either you will enjoy it,or you won't.

It is that sort of book.