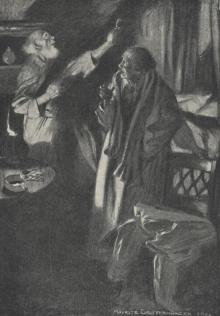 THE LADY OF THE BARGE

Without, the night was cold and wet, but in the small parlour of LaburnamVilla the blinds were drawn and the fire burned brightly. Father and sonwere at chess, the former, who possessed ideas about the game involvingradical changes, putting his king into such sharp and unnecessary perilsthat it even provoked comment from the white-haired old lady knittingplacidly by the fire.

"Hark at the wind," said Mr. White, who, having seen a fatal mistakeafter it was too late, was amiably desirous of preventing his son fromseeing it.

"I'm listening," said the latter, grimly surveying the board as hestretched out his hand. "Check."

"I should hardly think that he'd come to-night," said his father, withhis hand poised over the board.

"That's the worst of living so far out," bawled Mr. White, with suddenand unlooked-for violence; "of all the beastly, slushy, out-of-the-wayplaces to live in, this is the worst. Pathway's a bog, and the road's atorrent. I don't know what people are thinking about. I suppose becauseonly two houses in the road are let, they think it doesn't matter."

Mr. White looked up sharply, just in time to intercept a knowing glancebetween mother and son. The words died away on his lips, and he hid aguilty grin in his thin grey beard.

"There he is," said Herbert White, as the gate banged to loudly and heavyfootsteps came toward the door.

The old man rose with hospitable haste, and opening the door, was heardcondoling with the new arrival. The new arrival also condoled withhimself, so that Mrs. White said, "Tut, tut!" and coughed gently as herhusband entered the room, followed by a tall, burly man, beady of eye andrubicund of visage.

"Sergeant-Major Morris," he said, introducing him.

The sergeant-major shook hands, and taking the proffered seat by thefire, watched contentedly while his host got out whiskey and tumblers andstood a small copper kettle on the fire.

At the third glass his eyes got brighter, and he began to talk, thelittle family circle regarding with eager interest this visitor fromdistant parts, as he squared his broad shoulders in the chair and spokeof wild scenes and doughty deeds; of wars and plagues and strangepeoples.

"Twenty-one years of it," said Mr. White, nodding at his wife and son."When he went away he was a slip of a youth in the warehouse. Now lookat him."

"He don't look to have taken much harm," said Mrs. White, politely.

"I'd like to go to India myself," said the old man, "just to look round abit, you know."

"Better where you are," said the sergeant-major, shaking his head. Heput down the empty glass, and sighing softly, shook it again.

"I should like to see those old temples and fakirs and jugglers," saidthe old man. "What was that you started telling me the other day about amonkey's paw or something, Morris?"

"Nothing," said the soldier, hastily. "Leastways nothing worth hearing."

"Well, it's just a bit of what you might call magic, perhaps," said thesergeant-major, offhandedly.

His three listeners leaned forward eagerly. The visitor absent-mindedlyput his empty glass to his lips and then set it down again. His hostfilled it for him.

"To look at," said the sergeant-major, fumbling in his pocket, "it's justan ordinary little paw, dried to a mummy."

He took something out of his pocket and proffered it. Mrs. White drewback with a grimace, but her son, taking it, examined it curiously.

"And what is there special about it?" inquired Mr. White as he took itfrom his son, and having examined it, placed it upon the table.

"It had a spell put on it by an old fakir," said the sergeant-major,"a very holy man. He wanted to show that fate ruled people's lives, andthat those who interfered with it did so to their sorrow. He put a spellon it so that three separate men could each have three wishes from it."

His manner was so impressive that his hearers were conscious that theirlight laughter jarred somewhat.

The soldier regarded him in the way that middle age is wont to regardpresumptuous youth. "I have," he said, quietly, and his blotchy facewhitened.

"And did you really have the three wishes granted?" asked Mrs. White.

"I did," said the sergeant-major, and his glass tapped against his strongteeth.

"And has anybody else wished?" persisted the old lady.

"The first man had his three wishes. Yes," was the reply; "I don't knowwhat the first two were, but the third was for death. That's how I gotthe paw."

His tones were so grave that a hush fell upon the group.

"If you've had your three wishes, it's no good to you now, then, Morris,"said the old man at last. "What do you keep it for?"

The soldier shook his head. "Fancy, I suppose," he said, slowly. "I didhave some idea of selling it, but I don't think I will. It has causedenough mischief already. Besides, people won't buy. They think it's afairy tale; some of them, and those who do think anything of it want totry it first and pay me afterward."

"If you could have another three wishes," said the old man, eyeing himkeenly, "would you have them?"

He took the paw, and dangling it between his forefinger and thumb,suddenly threw it upon the fire. White, with a slight cry, stooped downand snatched it off.

"I won't," said his friend, doggedly. "I threw it on the fire. If youkeep it, don't blame me for what happens. Pitch it on the fire againlike a sensible man."

The other shook his head and examined his new possession closely. "Howdo you do it?" he inquired.

"Hold it up in your right hand and wish aloud," said the sergeant-major,"but I warn you of the consequences."

"Sounds like the Arabian Nights," said Mrs. White, as she rose and beganto set the supper. "Don't you think you might wish for four pairs ofhands for me?"

Her husband drew the talisman from pocket, and then all three burst intolaughter as the sergeant-major, with a look of alarm on his face, caughthim by the arm.

"If you must wish," he said, gruffly, "wish for something sensible."

Mr. White dropped it back in his pocket, and placing chairs, motioned hisfriend to the table. In the business of supper the talisman was partlyforgotten, and afterward the three sat listening in an enthralled fashionto a second instalment of the soldier's adventures in India.

"If the tale about the monkey's paw is not more truthful than those hehas been telling us," said Herbert, as the door closed behind theirguest, just in time for him to catch the last train, "we sha'nt make muchout of it."

"Did you give him anything for it, father?" inquired Mrs. White,regarding her husband closely.

"A trifle," said he, colouring slightly. "He didn't want it, but I madehim take it. And he pressed me again to throw it away."

"Likely," said Herbert, with pretended horror. "Why, we're going to berich, and famous and happy. Wish to be an emperor, father, to beginwith; then you can't be henpecked."

He darted round the table, pursued by the maligned Mrs. White armed withan antimacassar.

Mr. White took the paw from his pocket and eyed it dubiously. "I don'tknow what to wish for, and that's a fact," he said, slowly. "It seems tome I've got all I want."

&nbs
p; "If you only cleared the house, you'd be quite happy, wouldn't you?"said Herbert, with his hand on his shoulder. "Well, wish for two hundredpounds, then; that 'll just do it."

His father, smiling shamefacedly at his own credulity, held up thetalisman, as his son, with a solemn face, somewhat marred by a wink athis mother, sat down at the piano and struck a few impressive chords.