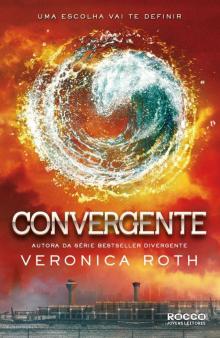 who guides and steadies me

Every question that can be answered must be

answered or at least engaged.

Illogical thought processes must be

challenged when they arise.

Wrong answers must be corrected.

Correct answers must be affirmed.

—From the Erudite faction manifesto

I PACE IN our cell in Erudite headquarters, her words echoing in my mind: My name will be Edith Prior, and there is much I am happy to forget.

“So you’ve never seen her before? Not even in pictures?” Christina says, her wounded leg propped up on a pillow. She was shot during our desperate attempt to reveal the Edith Prior video to our city. At the time we had no idea what it would say, or that it would shatter the foundation we stand on, the factions, our identities. “Is she a grandmother or an aunt or something?”

“I told you, no,” I say, turning when I reach the wall. “Prior is—was—my father’s name, so it would have to be on his side of the family. But Edith is an Abnegation name, and my father’s relatives must have been Erudite, so . . .”

“So she must be older,” Cara says, leaning her head against the wall. From this angle she looks just like her brother, Will, my friend, the one I shot. Then she straightens, and the ghost of him is gone. “A few generations back. An ancestor.”

“Ancestor.” The word feels old inside me, like crumbling brick. I touch one wall of the cell as I turn around. The panel is cold and white.

My ancestor, and this is the inheritance she passed to me: freedom from the factions, and the knowledge that my Divergent identity is more important than I could have known. My existence is a signal that we need to leave this city and offer our help to whoever is outside it.

“I want to know,” Cara says, running her hand over her face. “I need to know how long we’ve been here. Would you stop pacing for one minute?”

I stop in the middle of the cell and raise my eyebrows at her.

It’s been days since Evelyn mastered the chaos in the lobby of Erudite headquarters with a few short commands and had all the prisoners hustled away to cells on the third floor. A factionless woman came to doctor our wounds and distribute painkillers, and we’ve eaten and showered several times, but no one has told us what’s going on outside. No matter how forcefully I’ve asked them.

“I thought Tobias would come by now,” I say, dropping to the edge of my cot. “Where is he?”

“Maybe he’s still angry that you lied to him and went behind his back to work with his father,” Cara says.

I glare at her.

“Four wouldn’t be that petty,” Christina says, either to chastise Cara or to reassure me, I’m not sure. “Something’s probably going on that’s keeping him away. He told you to trust him.”

In the chaos, when everyone was shouting and the factionless were trying to push us toward the staircase, I curled my fingers in the hem of his shirt so I wouldn’t lose him. He took my wrists in his hands and pushed me away, and those were the words he said. Trust me. Go where they tell you.

“I’m trying,” I say, and it’s true. I’m trying to trust him. But every part of me, every fiber and every nerve, is straining toward freedom, not just from this cell but from the prison of the city beyond it.

I need to see what’s outside the fence.

I CAN’T WALK these hallways without remembering the days I spent as a prisoner here, barefoot, pain pulsing inside me every time I moved. And with that memory is another one, one of waiting for Beatrice Prior to go to her death, of my fists against the door, of her legs slung across Peter’s arms when he told me she was just drugged.

I hate this place.

It isn’t as clean as it was when it was the Erudite compound; now it is ravaged by war, bullet holes in the walls and the broken glass of shattered lightbulbs everywhere. I walk over dirty footprints and beneath flickering lights to her cell and I am admitted without question, because I bear the factionless symbol—an empty circle—on a black band around my arm and Evelyn’s features on my face. Tobias Eaton was a shameful name, and now it is a powerful one.

Tris crouches on the ground inside, shoulder to shoulder with Christina and diagonal from Cara. My Tris should look pale and small—she is pale and small, after all—but instead the room is full of her.

Her round eyes find mine and she is on her feet, her arms wound tightly around my waist and her face against my chest.

I squeeze her shoulder with one hand and run my other hand over her hair, still surprised when her hair stops above her neck instead of below it. I was happy when she cut it, because it was hair for a warrior and not a girl, and I knew that was what she would need.

“Right. I keep forgetting.” She pulls away just far enough to look at me. There is a wavering expression in her eyes, like she is a heap of leaves about to be scattered by the wind. “What’s happening? What took you so long?”

She sounds desperate, pleading. For all the horrible memories this place carries for me, it carries more for her, the walk to her execution, her brother’s betrayal, the fear serum. I have to get her out.