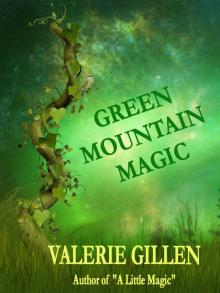 Siobhan Kelly sighed in irritation as her 6-year-old brother, DJ, lunged across her seat to peer out the plane window.

“Look, Chevy, it’s Lake Champlain! Is that cool or what?” he piped excitedly.

“Big deal, a lake. It’s nothing compared to the Pacific Ocean,” she retorted, although she had to admit you didn’t see chunks of ice floating in the Pacific. Not off the coast of southern California, anyway.

“Oooh, look, it’s Vermont!” DJ was back again, throwing himself halfway across her lap.

“You’re so busy looking at some dinky little town, guess you don’t need this anymore.” Siobhan grabbed DJ’s Nintendo and held it over her head.

“Both of you, settle down,” their mother said wearily from the seat behind DJ. “Siobhan, if you don’t care about looking out the window, why didn’t you let DJ sit there in the first place?”

“Because I called it,” Siobhan replied, trying to invest the childish phrase with the dignity appropriate to her 14-year-old self. “Besides, DJ got the window seat on the flight from California to Chicago.”

There was no response, but Siobhan just knew that Mom was rolling her eyes.

“So that’s Burlington,” her dad said with interest. “Maura, do you want to have a look? I’m sure it’s changed a lot since the last time you were here.”

“No, thanks,” her mom muttered vaguely. “They say the good thing about Burlington is, it’s pretty close to Vermont.”

There was a collective “huh?” from the rest of her family.

It was Siobhan’s turn to roll her eyes. Ever since this emergency trip had been announced, her mother had been acting weirder and weirder. Staring off into space, mumbling under her breath, and several times Siobhan had caught Mom looking at her in a very strange way. What the heck was that all about? She shrugged and let it go – her mother’s mother – the grandmother she’d never met – had apparently had some kind of stroke and was in a coma. It was enough to make anybody act weird. For an instant, Siobhan tried to imagine how she would feel if it was her own mom in the hospital, in a coma – and got a sick, hot feeling in the pit of her stomach. “So, Mom,” she said to shake off the mood. “How far is Grandma’s house from Burlington?”

“Oh, about an hour or so. See that mountain to the right of the city off in the distance? It’s called Camel’s Hump. Grandma’s house is south of that.”

Siobhan peered out the window. Burlington was a collection of not-very-tall buildings that stretched away from the lake and beyond that was – trees. A lot of trees, and – “Oh, my God. Is that snow on that mountain?”

“Oh, right. That’s Mount Mansfield,” her mother replied as the plane banked for its final approach to the airport. “Sure, it’s only April, so there’d still be snow on top. There’ll probably be some snow on the ground at Grandma’s too.”

An awed silence greeted these words, followed by DJ screeching, “Snow! Oh, cool! Chevy, we can go sledding and build a snowman, and all kinds of stuff!”

“Yeah, right.” Siobhan was mentally running through the list of clothes she’d brought with her, and winter coat and boots were nowhere to be found. She didn’t even own a heavy jacket.

“I don’t know about the sledding, but there should be enough to make a snowman. Maybe a small one. And, who knows, maybe it’ll snow while we’re here,” Mom said, in the tones of one promising a treat.

“I can’t wait! Chevy, the first thing we do when we get there, we have to build a snowman, okay? “

Well, one of them was signing on anyway. “Sure, squirt,” Siobhan said, to pacify DJ before he bounced his way right out of the seat. She sighed. If it was five o’clock in Vermont, that made it two o’clock back home. School would be almost over and on any normal Friday, she and her best friend Lauren would be squirming in their seats, just waiting for the bell to ring so they could get out of there and on to what really mattered – class at Cronin’s School of Irish Dance. Siobhan closed her eyes and went over the steps of her new reel in her mind, her hands dancing out the steps and her feet tapping in time. Turn-two-three, cut up, step down and switch, switch, bicycle, step, kick up – Siobhan hissed in pain as her foot spazzed out and rapped the seat in front of her. “Sorry,” she grimaced, as the man sitting in the seat looked around in annoyance. The competitions she and Lauren had planned on this spring, the hope that she might get her second first in Prelim Champ division in time to move up to Open Champion and be eligible for Nationals this summer – all gone now. Compared to that, the chance to build a snowman didn’t count for much.

As it turned out, they didn’t get the chance to see snow after all. By the time they had rented a car, stopped for dinner in town and then driven the hour to Grandma’s house, it was pitch dark and DJ was fast asleep in the booster seat next to her, as they wound their way higher into the mountains. Siobhan could tell it was out there, though. She cracked the window and the cold air that came whistling in smelled like something out of this world – wet rocks, ice, pine trees, wilderness.

They drove past the regional high school and through the outskirts of a small town before plunging down a muddy dirt road. There were no streetlights and the towering pine trees on either side added to the tunnel effect. Her mom reached a crossroads and crammed the brakes on. As promised, flakes of snow danced in the headlights.

“Are we there yet?” DJ asked sleepily.

“Mud season,” said Mom laconically. “It’s like this every spring.” She put the Subaru into four wheel drive and stepped on the gas, swerving from one side of the road to the other as she followed the tracks of prior drivers to stay out of the worst of the ruts.

“What if you meet someone coming the other way?” Siobhan wondered, wincing as the car scraped bottom.

“One of you pulls over and lets the other person by,” her mom replied absently, her hands tight on the wheel.

“Huh,” Siobhan said, eyeing the three foot deep ditches on both sides of the road.

Her grandmother’s house was at the end of the lane, looming darkly out of the surrounding forest, like an oversized version of the witch’s cottage in Hansel and Gretel. Her mother insisted there were houses on either side, but no lights punctured the midnight black and obviously the concept of neighbors was different out here in the sticks.

The whole place was just creepy, Siobhan thought, as she started unloading suitcases from the back of the car. She turned and came face to face with a tall figure that swayed toward her, arms outstretched. She shrieked, jumped back, and the porch light came on just as DJ, who had gotten his second wind, hit her in the butt with a snowball he’d scraped off a patch in the yard.

Mom stuck her head out the front door. “What’s going on? You’ll wake up the whole town.”

“I – it was,” Siobhan stuttered, and her stiffened shoulders drooped with relief when she realized the malevolent figure was only a bush that was rustling in the breeze. Except it wasn’t as tall as it had seemed. And it was over by the side of the driveway instead of in her face. And where were its arms? Siobhan frowned, moving forward, but another iceball from DJ splattered over her shirt and between her outraged shout, his chortles of glee and their mom’s command to get in the house immediately and stop making a racket, the moment was forgotten.

Once inside and by the light of several lamps, Siobhan could appreciate the
old-fashioned charm of her grandmother’s house; the hand-sewn quilt on the back of the couch, the patterned wallpaper, and the pot-bellied wood stove that Mom promised they would make a fire in tomorrow night, when everybody wasn’t so tired.

Asleep on her feet, Siobhan trailed her mother and DJ up the stairs, absentmindedly caressing the smooth, dark wood banister. She dumped her suitcase in the room allotted to her, brushed her teeth quickly before DJ could get in and hog the bathroom, and snuggled with a sigh of relief under the thick quilt. The waning moon was shining through her window and the canopy of the old four poster bed made her feel cocooned and protected. She frowned over the word as it crossed her mind. What would she need to feel protected from? Silly thought. The cold, maybe, or whatever lived in the woods outside – bears, wolves?

Siobhan shivered and turned her mind to other things. If it was 11 o’clock here, it would be 8 o’clock back home. Her friends were at the mall, Lauren had texted her earlier. Not as much fun without u, she’d written. They were probably in the food court eating General Tao’s Chicken. Then tomorrow, she had been scheduled to have a private lesson with her dance teacher. Hopefully her mom had remembered to call and cancel. Siobhan closed her eyes and rolled onto her side, her mind starting