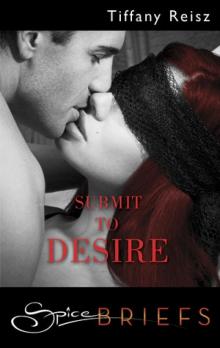 Author: Tiffany Reisz “Another one bites the dust,” Charlotte said, raising her glass. Two other glasses met it and the resulting clink sent Amaretto sour dripping over her fingers and onto the floor.

“Good riddance to bad boyfriends. ” London downed the last of her Fuzzy Navel and sat the empty glass on the bar.

“I’ll drink to that,” Sasha said, sucking out the last drops of her Long Island Iced Tea.

Steele, the bartender, refilled her glass.

“That’s the problem. ” Charlotte tucked a stray strand of red hair back into her straw cowboy hat. “Nick wasn’t a bad boyfriend. He was…nice. ”

Sasha and London stared at her over the top of their drinks.

“You already dumped him, Char. ” London wadded up her napkin and tossed it at Steele. “Don’t add insult to injury. ”

“You women are all the same. ” Steele set three shots up in front of them. “God forbid you date a guy who’s nice to you. ”

“Nick was nice. ” Sasha picked up her shot. “And kind of hot. Nice isn’t bad. Nice is just…boring. ”

Charlotte sighed and gazed down into her drink.

Nick was nice. Too nice. So nice she wanted to kill him for it sometimes. Last week had been the last straw. She’d fallen asleep during sex. Missionary position. Five minutes of foreplay. Five minutes of thrusting. Ten minutes after of “I love everything about you. ” Just…like…always.

“Boring,” Charlotte echoed as she looked up and met the eyes of a man walking through the bar. The man, whoever he was, looked to be in his mid-thirties and had shoulder-length dark hair and olive skin. From what Charlotte could tell, he wore a weird suit, kind of Victorian-looking, like something off a romance novel cover. And he wasn’t walking so much as strolling, as if the crowded nightclub was a park in spring, and he was a country squire out on a pleasant Sunday ramble.

“Steele, who is that guy?” London asked.

“That is Kingsley Edge. And he is the opposite of boring. And if you three have any sense you’ll stay away from him. ”

“What sense I had just took her panties off and laid down in front of him,” Sasha said with a drunken giggle.

“God, he looks like a pirate. ” London ran her finger around the rim of her glass.

“I think he looks dangerous. ” Sasha shot the man her best come-over-here smile.

Charlotte sighed. Sasha and London had promised her a girls’ night out to help cheer her up over yet another failed relationship. “No men” had been their promise. Only alcohol and dancing. Maybe it was time to get some real friends.

“He looks like he needs a haircut. ” Charlotte downed her shot in one bitter swallow.

“Hey, do your trick, Char. That’ll get his attention,” Sasha begged.

“I don’t want to get his attention. He’s a pimp. ” Charlotte had heard of Kingsley Edge. No one who haunted New York’s nightlife hadn’t. His respectable business interests included owning several of the city’s top clubs. Rumors swirled about the man, however; rumors that he made the vast majority of his money pushing flesh and not cocktails.

Steele laughed and the three friends spun back around on their bar stools.

“Talent scout?” Charlotte’s eyes followed Kingsley Edge as he made his way through the club. Every few feet he’d pause and gaze at her through the crowd. “What sort of talent?”

“Maybe your talent. ” Steele winked at her. She’d worked at this club, Le Cirque de Nuit, a few years ago and had picked up a trick or two.

Sasha and London looked at Charlotte with pleading eyes. Steele held out a shot glass full of liquid paraffin. Once again Charlotte decided to make getting new friends a top priority. She was almost drunk. They were definitely drunk. And they were making her perform for them. Fine—if they insisted.

Charlotte sighed and took the shot glass. Sasha handed her a lighter.

Sasha and London clapped while they hopped off their stools and stood far away. Charlotte noticed that the commotion had not just gotten the attention of most of the nightclub patrons, but had alerted Kingsley Edge as well. He stood next to a column and leaned against it with one eyebrow raised.

Charlotte inhaled deeply, swigged the liquid paraffin, pursed her lips, flicked the lighter and pushed air out so hard her ears popped. A fireball blew out several feet in front of her and set everyone in the nightclub screaming and clapping. She kept blowing even after the fire went out, knowing she had to exhale anything left in her mouth. Hopping off her bar stool, she gave a small bow before turning back to her drink. She’d already had five tonight. One for each nice boyfriend she’d dumped in the last five years.

Two hours later she lay on the floor in the VIP section. She heard two male voices talking above her. One sounded like Steele’s. The other sounded almost melodic…deeply male and as intoxicating as all the alcohol she’d imbibed.

“It’s last call, chief. What should I do with her?”

“You sure about that?”

She was close to passing out but she remembered the laugh. A warm, low laugh, she felt it more than it heard it. It rolled down her body from her neck to her ankles.

“Quite sure,” the voice said in an accent her addled mind recognized as French. “I like a woman with a little fire in her belly. ”

Charlotte woke up in the fetal position. Groaning, she opened her eyes and saw a pair of knee-high leather riding boots. The boots belonged to a pair of long legs crossed at the ankles and using her back as a footstool. Looking up she saw Kingsley Edge lounging on the VIP sofa with a dainty teacup and saucer in his hands. Sipping at his tea he smiled down at her.

“I hope you don’t mind my saying this, chérie, but you need a new hobby. ”

It took her much longer than it should have to process his words.

“You know who I am. And I know who you are. ” He held up her driver’s license and studied it with his dark eyes. “Charlotte Brand. Steele tells me your friends call you Char. Shameful. I’ll call you Charlie, if you don’t mind. ”

“Oui. I love women with men’s names. It satisfies a certain deviant side to me. ”

“Is your boot on my back part of your deviant side?” Charlotte sat up, and Kingsley lifted his feet off her back with a graceful air.

“What can I say? When I see a beautiful woman so drunk she ends up passed out on the floor, I assume she’s there because she wants to be walked all over. ”

“Nice guilt trip. I heard you were a pimp. Are you a priest, too?”

“Non. But I have a priest on speed dial if you need one,” he said with a wicked grin on his sculpted lips. “Would you like to come home with me now, Charlie?”

“What are you going to do to me?” His face came into focus for the first time. She’d heard he was French…or half-French, something like that. He was rich and had half the judges and cops in town in his back pocket. She’d also heard he was handsome, but handsome didn’t do justice to the man in front of her.

“Breakfast and a shower are in order. Perhaps then we can discuss a certain business opportunity. ”

“The shower and breakfast might work. But I can save you the trouble—no to any business opportunities. ”

“You say that now…but wait until you try my pancakes. ”

He sat his teacup and saucer down and held out his hand.

What the hell was she getting herself into?

Charlotte reached out and put her hand into his. Wrapping his fingers around hers, he pulled her to her feet. Wobbling a little on her high heels, she put her hand on his chest to steady herself. He covered her hand with his and met her eyes.

“You’re a beautiful woman. ” His dark-lashed eyes studied her face. “Even with scuff marks on your cheek. ”

Charlotte blushed and rubbed her face.

“Don’t bother. We’ll wash it off at my townhouse. Shall we, Charlie?”

“Okay, so you’re going to call me Charlie. What do I call you?”

“Everyone calls me Kingsley or King. Or Monsieur. Take your pick. ”

Charlotte blinked and tried to make out any of the words Kingsley had said. But none of it registered as anything but poetic nonsense.

“I said ‘my father was French and I served in the French Foreign Legion. ’”

“Oui, and you’re coming home with me. ” He flashed her a wicked grin.

Kingsley strode off and Charlotte followed behind him. He paused as he passed the bar and picked up her cowboy hat, which someone had left there. He tossed it back to her.

“I’m giving it to you but don’t think you’re allowed to wear it in my presence. ”

“Because you have the most beautiful claret-colored hair I’ve ever seen, and it’s a crime to cover it. ”

“I don’t care if it’s real. I wasn’t born bilingual but that doesn’t change the fact that it turns you on that I am. Oui?”

Kingsley spun on his heel to smile back at her. He raised his eyebrows and seemed to be waiting for her to answer.

“J’accepte. ” Kingsley threw open the doors to the club.

Charlotte shielded her face as the morning sunlight beat down on her aching eyes. Once inside the back of Kingsley’s car she noticed the lush leather interior and the old-world feel.

“Holy shit…is this a Rolls-Royce?”

Kingsley sat on the bench seat opposite her.

“She is. Not my favorite one, but she’s fine for running errands. ”

“So am I an errand?” Charlie asked.

“I don’t know. ” Kingsley gave her a long look that set the hairs on her arms standing up. “Are you running?”

Charlotte looked out the window and saw the city regulars on their way to work—men in power suits, women in severe dresses. And here she sat in a Rolls-Royce with one of the city’s most notorious underground figures.

“Good answer, Charlie. Here we are. ”

The Rolls pulled in front of an elegant black-and-white bricked town house that looked at least three stories high.

Kingsley left the car first and held out his hand for her. She tried to stay steady on her feet as he pulled her out. Kingsley steered her up two flights of stairs. A stunningly beautiful young woman delivered a file folder to him with a quick curtsy.

“You can shower while I read,” Kingsley said.

Submit to Desire by Tiffany Reisz / Young Adult / Romance & Love have rating 4.2 out of 5 / Based on50 votes

Men at Work
The Original Sinners